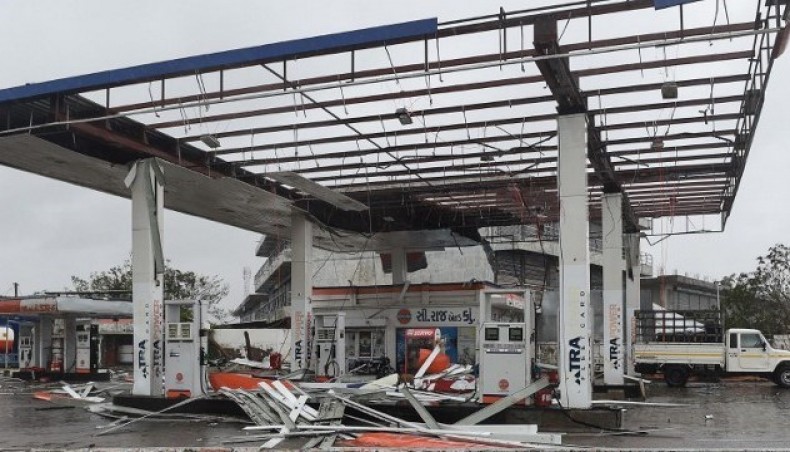 A damaged petrol pump is seen in Mahua on May 18, 2021, after Cyclone Tauktae hit the west coast of India with powerful winds and driving rain, leaving at least 20 people dead. — AFP photo

At least 27 people were dead and more than 90 missing on Tuesday after a monster cyclone slammed India, compounding the country’s woes as it recorded a new record number of coronavirus deaths in 24 hours.

The colossal swirling system dubbed Cyclone Tauktae is the latest in what experts say is a growing number of increasingly severe storms in the Arabian Sea as climate change warms its waters.

Hundreds of thousands of people were left without power after the storm hit the Gujarat coast in western India on Monday evening, leaving a trail of death and destruction.

Winds up to 130 kilometres per hour smashed seafront windows and knocked over power lines and thousands of trees, blocking roads leading to affected areas, officials said.

‘I have never experienced such intensity in my life,’ a hotel owner in the town of Bhavnagar said.

‘It was pitch dark as power was cut off and winds were making a roaring sound. It was scary.’

One support vessel serving oil rigs that were walloped by eight-metre waves off Mumbai sank and 93 of the 273 people who had been on board were missing, the Indian Navy said Tuesday.

The defence ministry said 180 people were rescued, with warships attempting to save the rest of the crew in ‘extremely challenging sea conditions’.

Navy helicopters managed, however, to rescue all 137 people stuck on another barge that also slipped its anchor and ran aground. One other barge and an oil rig were also adrift.

Elsewhere, seven fresh casualties took the toll to 27 including a child crushed by a collapsing wall, an 80-year-old woman killed by a falling pole and a teenage girl by a crumbling roof.

‘Since the cyclone made landfall we have not had power or communications,’ local official Aayush Oak said by phone from the coastal district of Amreli, where 40-50 mobile phone towers were damaged.

Although the cyclone was one of the fiercest in decades, better forecasting than in previous disasters meant that 200,000 people in danger zones were evacuated from their homes.

‘Our planning over the last three days has paid off. We have managed to minimise human casualties,’ said Gujarat state chief minister Vijay Rupani.

The cyclone barrelled inland, weakening slightly but still bringing heavy rains and gale-force winds. Forecasters said it would ease into a deep depression during the next six hours.