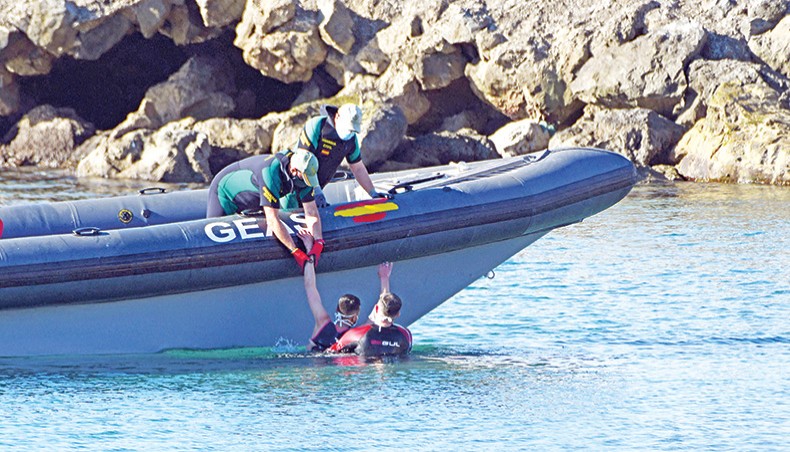 Spanish Civil guards pull a migrant into an inflatable boat after he arrived swimming to the Spanish enclave of Ceuta from neighbouring Morocco on Monday. — AFP photo

About 100 migrants, some using inflatable rings, swam to the Spanish enclave of Ceuta from neighbouring Morocco early on Monday, Spanish authorities said.

The migrants set off from beaches south of Ceuta and were detained when they entered the tiny Spanish territory, a spokesman for the Guardia Civil police force said.

They were mostly young men but among them were also children and some women, according to a spokesman for the Spanish government delegation in Ceuta.

Some used inflatable swimming rings while others used rubber dinghies, he said.

‘It was low tide and in some places you could practically walk across,’ he said.

The migrants were checked by Red Cross workers before being taken to a reception centre. During the last weekend of April, around 100 migrants swam to Ceuta in groups of 20 to 30. Most were deported back to Morocco.

The wave of arrivals came at a point of tension between Madrid and Rabat over the presence in Spain of the leader of the Western Sahara independence movement.

Rabat reacted angrily after it emerged that the leader of the Polisario Front, Brahim Ghali, has been treated at a hospital in Spain for Covid-19 since mid-April.

The Polisario Front has long fought for the independence of Western Sahara from Morocco.

Ceuta, together with Melilla — another Spanish enclave in north Africa — have the European Union’s only land borders with Africa, making them popular entry points for migrants seeking a better life in Europe.

Migrants try to reach the enclaves either by swimming along the coast or climbing the tall border fences that separate them from Morocco.