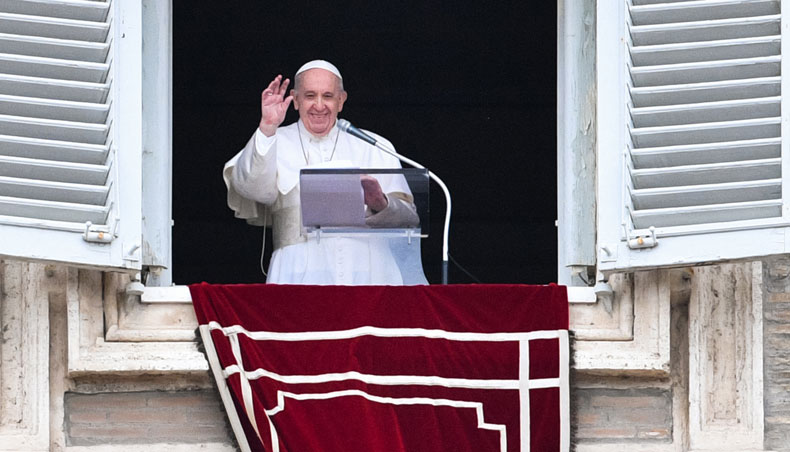 Pope Francis waves from the window of the apostolic palace overlooking St Peter’s Square, during the weekly Angelus prayer followed by the recitation of the Regina Coeli on May 16, 2021 in The Vatican. — AFP photo

Turkish president Recep Tayyip Erdogan on Monday urged Pope Francis to help rally the world to adopt sanctions against Israel for its ‘massacre’ of Palestinians in the Gaza Strip.

The phone call between Erdogan and the pontiff came as Turkey presses ahead with a furious diplomatic push to help end bloodshed that has claimed the lives of 197 Palestinians and 10 people in Israel since May 10.

Erdogan told Pope Francis that ‘Palestinians will continue to be subjected to a massacre unless the international community punishes Israel with sanctions’, the Turkish presidency said.

The pope’s messages were of ‘great importance to mobilise the Christian world and the international community’, the Turkish statement added.

The pope on Sunday said the loss of innocent lives in the violence was ‘terrible and unacceptable’, warning that the conflict risked ‘degenerating into a spiral of death and destruction’.

Erdogan, who has vocally championed the Palestinian cause during his 18-year rule, has spoken out repeatedly against Israel’s actions, accusing it of waging ‘terrorism’ last week.

He told the pope on Monday that ‘all of humanity should be united against’ Israel.

‘The savagery caused by Israel threatens regional security,’ he added.

The Turkish push for sanctions against Israel included a phone call on Monday between foreign minister Mevlut Cavusoglu and his British counterpart Dominic Raab.

Cavusoglu told Raab it was ‘essential that the international community should give a stronger reaction’ to Israel’s aggression, a Turkish foreign ministry source said.

Israeli air strikes hammered the Gaza Strip on Monday after a week of violence that has killed more than 200 people, the large majority Palestinian, despite international calls for de-escalation.

Before dawn, in the space of just a few minutes, dozens of Israeli strikes bombarded the crowded coastal Palestinian enclave controlled by Islamist group Hamas, according to AFP journalists and the army.