What does it signal to the region? 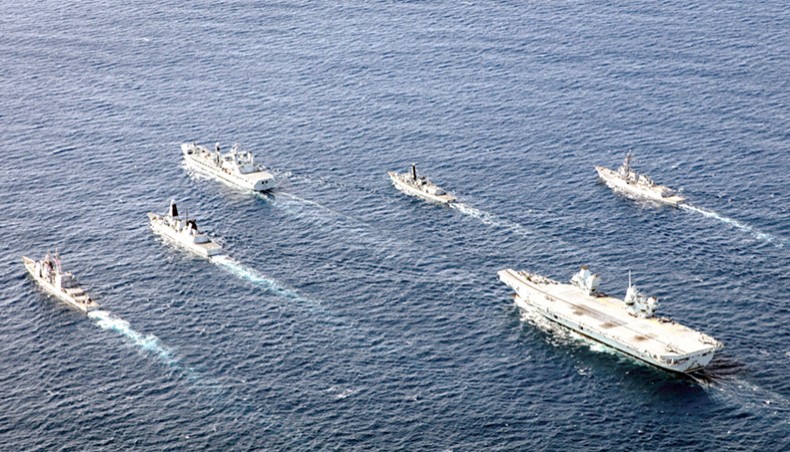 The Carrier Group will visit 40 countries, travelling 26,000 nautical miles in 28 weeks. It will take part in 70 engagements with NATO and non-NATO partners. The Carrier Group will hold joint exercises with navies of Japan, Australia, Canada, New Zealand, France, the United Arab Emirates, Denmark, Greece, Italy, Turkey, Israel, India, Oman and South Korea. The key mission of the flotilla is to sail through the South China Sea ‘to exercise freedom of navigation’ defying China’s territorial claims and continue with the voyage through the Taiwan Strait as a symbol of support for Taiwan.

Royal Navy’s 65,000-ton HMS Queen Elizabeth, the £3.2 billion aircraft carrier, will be on its first operational deployment to lead the United Kingdom’s Indo-Pacific mission. This will be the Royal Navy’s first-ever overseas operational deployment in four decades since the Falklands war in 1982 and in seven decades in Asian waters since the Korean War in 1950. The aircraft carrier is the Royal Navy’s largest and most powerful warship ever. The Royal Navy describes it as being ‘able to strike from the sea at a time and place of our choosing….’ The UK ministry of defence said that it would be the ‘largest concentration of maritime and air power to leave the UK in a generation.

‘The aircraft carrier will have 18 F-35B stealth fighters on board and be backed by the Type 45 destroyers, HMS Defender and HMS Diamond; Type 23 anti-submarine frigates, HMS Kent and HMS Richmond; and the Royal Fleet Auxiliary’s logistics ships Fort Victoria and Tidespring. These will be backed by a latest Astute-class nuclear submarine armed with Tomahawk Cruise missiles. Also participating will be 14 naval helicopters, eight RAF fast jets and a company of Royal Marines.’ The US Navy Arleigh Burke-class destroyer USS the Sullivans and a Dutch frigate, HNLMS Evertse, will join the Carrier Group.

After the end of the cold war, the United Kingdom scaled down its fleet to just 19 vessels. It started to revitalise its navy and other branches of the armed forces after the defence review ‘Defence in a Competitive Age’ followed by Integrated Review of Defence, Security and Foreign Policy. The Defence Review identified China and Russia as major challengers to the shared geo-political and economic interests in the Indo-Pacific. The Integration Review stated, ‘the UK will deepen… engagement in the Indo-Pacific… establishing a greater and more persistent presence than any other European country. The region is already critical to our economy and security; is a focal point for the negotiation of international laws, rules and norms; and will become more important to UK prosperity over the next decade.’

The United Kingdom’s defence minister Ben Wallace described the mission as part of post-Brexit strategy ‘flying the flag for Global Britain, projecting our influence, signalling our power, engaging with our friends and reaffirming our commitment to addressing the security challenges of today and tomorrow….’ and showcase the United Kingdom’s readiness to ‘play an active role in shaping the international system of the 21st century.’

The Quadrilateral Security Dialogue, a strategic platform composed of the United States, India, Japan and Australia, is inching forward with eye on containing China. The United States has been the lead and pivot in all politico-military groupings forming around China. The United Kingdom is the latest to join the hands. The United Kingdom’s deployment of the Carrier Group could add to psychological burden on China in the middle of the already complex regional geo-politics but unlikely to drift China away from its policy on South China Sea and Taiwan.

Mohammad Abdur Razzak is a retired commodore of Bangladesh Navy.