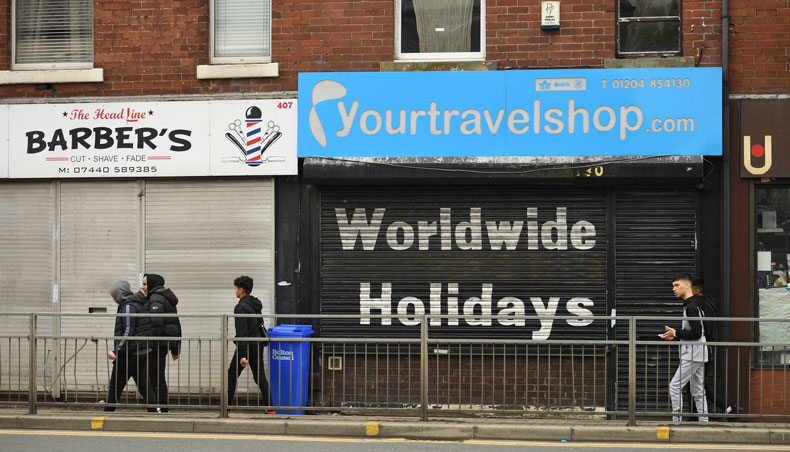 Pedestrians walk past a closed travel shop in Bolton, northwest England on May 14, 2021, as a Covid-19 variant of concern has been identified in the community. — AFP photo

The British government on Sunday pushed back against criticism it was too slow to impose travel restrictions on India as a coronavirus variant identified in the subcontinent spreads in the UK.

England and the devolved nations of Scotland and Wales will unlock parts of their economy on Monday but the future roadmap for reopening has been put in doubt over the more transmissible variant.

Health secretary Matt Hancock told Sky News it was ‘completely wrong’ to suggest the UK could have acted faster to designate India as a ‘red list’ country meaning arriving travellers would have to quarantine in hotels.

He explained that India was placed under the strict travel restrictions in April before the variant, known as B1.617.2, was under investigation.

The British government has come under criticism from opposition politicians over its decision to put Pakistan and Bangladesh on its red list before India.

Hancock rebuffed the suggestion the decision was influenced by a planned trip by Prime Minister Boris Johnson in April to assist in post-Brexit trade talks.

‘We take these decisions based on the evidence,’ he said over the visit which was eventually scrapped because of surging Covid cases in India.

Indoor hospitality and indoor entertainment such as cinemas, museums and sports venues are to open their doors in most parts of the UK for the first time in months on Monday.

People and families will also be able to meet with some restrictions in private houses under the new measures.

Hancock said the reopening could go ahead despite the presence of 1,300 cases of the Indian variant in the UK because of the country’s successful vaccination campaign and close monitoring of cases.

However, he sounded a note of caution over plans to completely lift restrictions on June 21.

‘We’re in a race between the vaccination programme. And the virus, and this new variant has given the virus some extra legs in that race, but we have a high degree of confidence that the vaccine will overcome,’ the health secretary said.