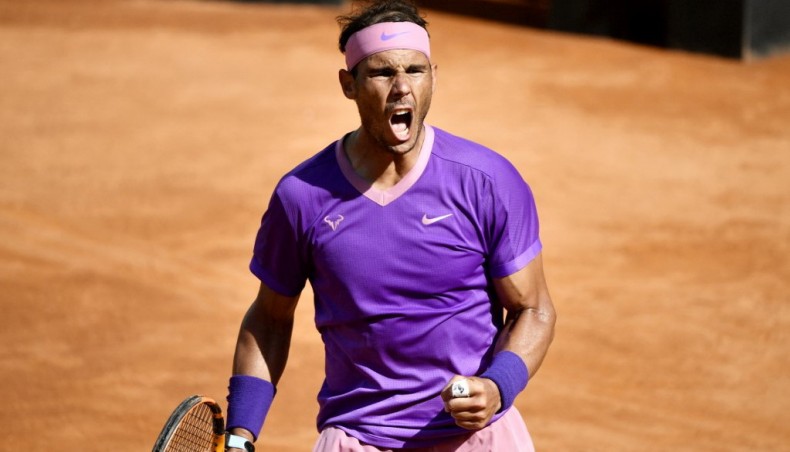 Top seeds Novak Djokovic and Rafael Nadal reached the quarter-finals of the Italian Open in contrasting styles on Thursday as spectators returned to the stands for the first time in Italy.

Nadal and Djokovic have won 14 of the last 16 Rome titles between them, playing each other in the final five times.

‘To be able to win these kind of matches against young players gives me confidence with my body,’ said 34-year-old Nadal, who has fallen early in two clay-court Masters tournaments in Monte Carlo and Madrid ahead of Roland Garros.

Nadal will next play either Germany's Alexander Zverev, the sixth seed, or Japan's Kei Nishikori for a place in the semi-finals.

‘It always feels like home coming back to Rome,’ said Djokovic, who has never failed to reach the quarter-finals in his 15 appearances in the clay-court event.

‘Each year the love affair grows even more because the bond is stronger and stronger.

‘Hopefully I can feel a little bit of that love more tomorrow so I can keep on progressing in the tournament.’

After losing his opening service game, Djokovic powered back with five breaks of serve, outclassing his rival, despite a late fightback, to seal the win on his sixth match point.

‘He started well, but I managed to break back straight away and establish the control and consistency,’ said the 18-time Grand Slam winner.

‘I thought I played at least 20-30 percent better than on Monday. I am on a good trajectory and hopefully tomorrow will be even better.’

Spaniard Nadal will be making his 16th last-eight appearance in Rome. It will also be his 97th ATP Masters 1000 quarter-final.

Shapovalov also broke for 3-1 in the third set but Nadal broke back immediately and held on despite two match points against him in the 12th game to force a tie-break.

Nadal's experience in the high-pressure moments paid off against the 22-year-old who had beaten him in their first meeting in Montreal in 2017.

For Shapovalov it was a ‘tough loss’ with only ‘one or two points’ the difference in the clash of left-handers.

‘It's just a tough loss but who's going to give me crap for losing to Rafa?’ said the Canadian who won his only ATP title in Stockholm in 2019.

The 23-year-old hit 18 aces and saved two set points at 4/6 in the first-set tie-break to set up a meeting with Argentina's Federico Delbonis in the last eight.

Meanwhile, fans were happy to return after more than a year without live sport.

‘After all this time it's good to be able to watch live sport,’ said Alessandro Cimini, one of the first to arrive at the Foro Italico with his son to watch Djokovic and Nadal.

‘We bought tickets in January 2020 and we can finally come! On the one hand I'm happy it feels good after all we've been through even if obviously it's not yet back to normal on centre court,’ added another tennis fan, Rosy De Luigi, who travelled from San Marino.

Football's Italian Cup final in Reggio Emilio next Wednesday will also have a limited crowd, followed by Euro 2020 matches at the Stadio Olimpico in Rome.