Gerd Muller would be happy if Lewandowski equals goal record 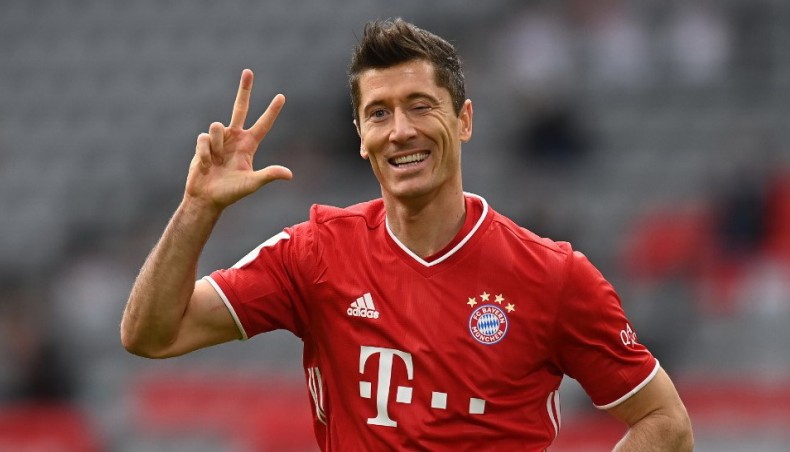 The wife of Gerd Muller says the former Bayern Munich legend would be happy to see Robert Lewandowski equal - but not break - his 49-year-old Bundesliga goal record with the Poland striker just one short.

Lewandowski hit a hat-trick last Saturday as Bayern were crowned Bundesliga champions for the ninth season in a row before their 6-0 thrashing of Borussia Moenchengladbach.

He is now on 39 league goals this season -- tantalisingly close to Muller's record of 40 scored in the 1971/72 Bundesliga season.

Lewandowski, 32, has two games left to reach Muller's milestone -- away to mid-table Freiburg on Saturday and home to Augsburg the weekend after on the final day of the season.

Muller, 75, is currently in poor health and suffering from dementia.

However, his wife Uschi says the former Bayern and West Germany star would be happy for Lewandowski if his record is finally matched.

During his stellar career, Muller scored a total of 365 goals in 427 Bundesliga games, but has been in a care home since November 2015.

‘Gerd would be happy for him,’ Uschi Muller told magazine Sport Bild.

‘He would be the first to congratulate him.

‘He was always surprised that someone hadn't caught up with him long ago.

‘I am firmly convinced that Lewandowski will do it. He has played a great season, is a hard worker.’

Muller, nicknamed 'The Bomber', scored his 40 goals in 34 games during an incredible season in which he claimed four Bundesliga hat-tricks, as well as scoring four goals in an 11-1 mauling of Borussia Dortmund and five goals in a 7-0 drubbing of Oberhausen.

Lewandowski's tally of 39 goals is all the more remarkable as he has only played 27 of Bayern's 32 league games so far this season.

His superb hat-trick on Saturday was his fifth in the league this season, which includes the four goals he netted for Bayern in a nervy 4-3 home win against Hertha Berlin last October.

Lewandowski, voted FIFA's best male player of 2020, is one of the world's top strikers having scored 275 goals in 348 Bundesliga matches for Bayern and former club Dortmund.

Muller's wife says comparisons between her husband and Lewandowski are pointless as they come from such different eras.

‘You can't compare the two at all. Robert is an athlete, Gerd was an artist,’ added Uschi Muller.

‘He was like a rubber ball. Gerd always had two men practically standing on his feet (marking him).

‘That is impossible with Lewandowski and his athletic build.’

‘As a wife, I'd rather Gerd kept it,’ she laughed.