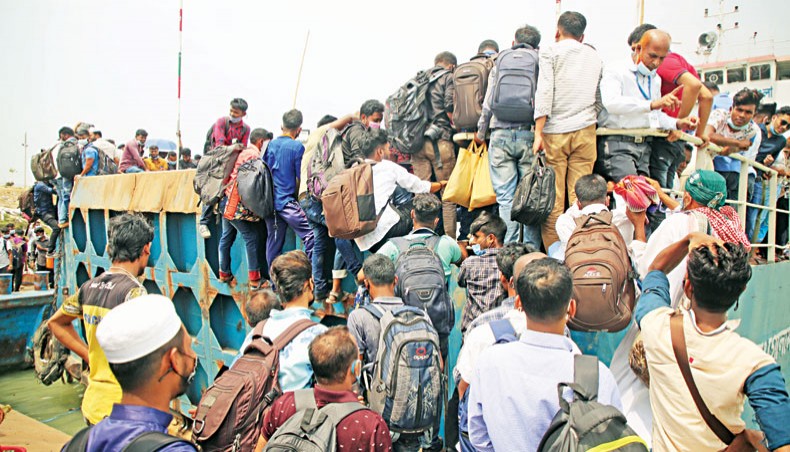 People on their way to native areas desperately try to get on a ferry even after the closure of its door at Shimulia ferry terminal in Munshiganj on Tuesday. — Sony Ramany

The Eid rush of people from the capital city and adjacent districts reached its peak on Tuesday in violation of all Covid restrictions on public movement.

Tens of thousands of home-goers were seen crowding ferry terminals, using vehicles not even registered for carrying passengers on important highways, standing at ferry terminals and roads and walking to their destinations amid heavy rainfalls at places.

Many of them left the capital at night by trucks and pickups risking their lives and paying beyond their ability as the ban on train, launch and inter-district bus services remains in force.

They flouted health regulations as they did not maintain social distancing and did not wear masks properly amid the risks of a fresh surge in coronavirus infections.

Thousands of people left Dhaka also on foot throughout the day crowding roads in areas like Chandra of Gazipur and Tongi.

Serious traffic congestions were seen on the capital roads throughout the day while a microbus fell into water at Daulatdia ferry terminal during a storm.

On the day the country’s Covid death toll crossed 12,000 mark.

The novel coronavirus has infected 7,76,257and killed 12,005 people in the country till Tuesday, according to the Directorate General of Health Services.

The three-day public holiday on the occasion of Eid-ul-Fitr will start on May 13, which can be extended till May 16 depending on moon sighting.

Earlier the government on May 5 extended the restrictions on public movement and activities till May 16 midnight aimed at containing the Covid situation.

A circular issued by the Cabinet Division also said that officials and employees of all government, semi-government, autonomous and non-government offices shall stay at their respective work stations.

Earlier the government has allowed — despite restrictions on public movement and activities — other public road transports and domestic flights to operate, banks to run their activities and reopened shops and shopping malls amid high risks of infection with new variants detected in the country.

Prime minister Sheikh Hasina on May 6 urged the people to celebrate Eid at their present locations to stop the further spread of coronavirus.

But still, people in huge numbers have been undertaking journey for days for their village homes around the country.

People in groups and columns in and around the capital were seen getting on pickups, rickshaw vans and open trucks besides intra-district buses, cars and motorcycles — whatever vehicles they could avail for their journey home.

A huge number of people were seen standing at the Chandra crossing of Gazipur and Tongi to get on any transport available.

The New Age Munshiganj correspondent reported that since morning thousands of passengers on foot had been thronging  the Shimulia ferry terminal while the BIWTC operated all ferries of its fleet to carry the passengers and vehicles.

Waiting travellers jumped on ferries whenever they came to the terminal and stood in body-to-body contact without caring for how they were wearing masks.

Earlier on Saturday, the BIWTC had decided that ferries would not operate on the major river routes — Paturia–Daulatdia, Shimulia–Banglabazar and Aricha–Kazirhat — during the daytime from Saturday morning to halt passenger movement in order to contain the spread of Covid-19 and the next day [Sunday] the government deployed members of the Border Guard Bangladesh at all ferry terminals.

But the corporation backtracked on its decision on Monday and started running the ferry service as it struggled to handle the pressure of thousands of passengers.

Shimulia terminal manager (commercial) Shafayet Ahmed said that they were now running all the ferries at their disposal.

Our Manikganj correspondent reported that despite the check posts installed by the local administrations, police and BGB on the Dhaka–Aricha highway, countless people crossed the River Padma through the Paturia–Daulatdia route.

The police were seen sending back some cars at Paturia terminal to go back from where they came but passengers still came to the Paturia and Aricha terminals travelling 10 to 12 kilometres amid rains on foot or  by rickshaws, vans, auto-rickshaws and motorcycles.

The ferries carried them with emergency vehicles and motorcycles.

Upazila nirbahi officer ABM Ruhul Amin said that they would not allow private cars to come to the Paturia terminal, which would be allowed to cross the river at night in ferries with goods-laden vehicles.

The New Age correspondent in Tangail reported that a vast number of buses, trucks, pickups, cars and motorcycles with passengers crossed the Dhaka–Tangail–Bangabandhu Bridge highway on Tuesday.

Hundreds of journeyers bound for northern districts, including day labourers and low-income people, were seen waiting on the highway at Rabna bypass as they could not afford to have spaces on trucks and microbuses due to fares beyond their ability.

Some inter-district buses were seen to travel to Sirajganj from Tangail defying the ban.

Meanwhile, a microbus fell into the River Padma from a pontoon at the Daulatdia ferry terminal in Rajbari at around 11:30am amid rains and the Fire Service recovered the vehicle at around 2:00pm.