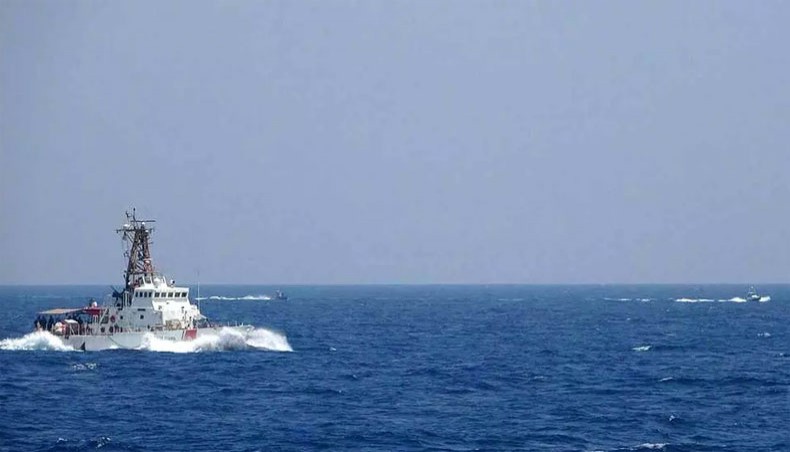 A US Navy photograph from May 10 showing two Iranian attack craft in the distance, which Washington said buzzed US naval vessels in the Strait of Hormuz. --AFP photo

Iran’s Revolutionary Guards said Tuesday they warned US vessels after Washington said warning shots were fired near Iranian attack boats, the latest confrontation between the rivals in the Gulf.

The US had earlier said the warning shots were fired after more than a dozen Iranian fast attack boats buzzed close to a US Navy submarine and escort ships in the Strait of Hormuz on Monday.

The Revolutionary Guards’ navy confirmed it had encountered seven US vessels in the incident, but said it warned them ‘while maintaining the legal distance ... against their risky and unprofessional behaviour, after which they continued on their way’.

It said in a statement that the US behaviour included ‘flying helicopters, firing flares, and aimless, unnecessary and provocative shooting’.

The Guards said its navy was conducting ‘routine missions in the territorial waters’ of Iran, but did not specify whether the American vessels had entered the Islamic republic’s waters.

Pentagon spokesman John Kirby had said earlier that 13 Guards’ boats approached the seven US vessels at high speeds, closing within 140 metres before one of the US vessels fired 30 shots in two volleys, until they moved away.

‘Sadly harassment by the IRGC-N is not a new phenomenon,’ said Kirby, referring to the Guards’ navy.

‘It’s unsafe, it’s unprofessional. It’s the kind of activity that can lead to somebody getting hurt, and can lead to a real miscalculation there in the region,’ Kirby added.

Kirby pointed out that the Iranian actions took place in the Strait of Hormuz, where ships have little room to move.

‘It’s an international waterway and of course when you’re in the strait, there are certain limits to your ability to manuever,’ he said.

In response, the Guards called on Washington to avoid ‘false narratives’, and accused it of being ‘the centre of instability, threat and insecurity in the region’.

The encounter was the second such incident in two weeks, according to the US Navy. In late April, three Iranian fast inshore attack craft provoked warning shots when they came close to two US vessels in international waters in the northern part of the Gulf, it said.

No shots were fired in that encounter.

In its statement, the Guards’ navy said its forces will ‘calmly and confidently follow their missions in the Strait of Hormuz and the Persian Gulf’ and are ready to respond to ‘any miscalculation’ by the US.

The confrontations comes amid talks in Vienna between Iran and major powers on reviving a landmark 2015 nuclear deal abandoned three years later by then US president Donald Trump.