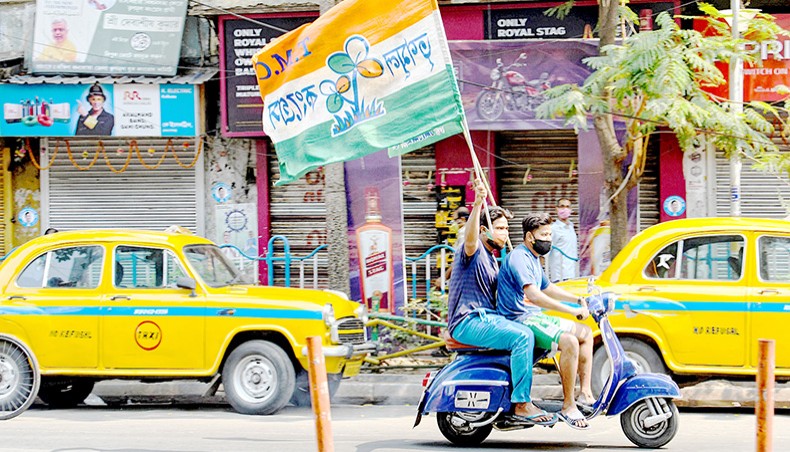 Supporters of the Trinamool Congress party celebrate the party’s lead in the West Bengal state legislative assembly elections during counting in Kolkata on May 2. — Agence France-Presse

WEST Bengal elections results could not have been, to put it mildly, more disappointing for the Indian prime minister and his Bharatiya Janata Party-led National Democratic Alliance. Never in India’s electoral history has the party/alliance in the centre led by the prime minister organised themselves against a regional party in power in a state in the manner Narendra Modi did and led the NDA alliance to defeat Mamata Banerjee from leading Trinamool to power for a third time.

Modi focused on the West Bengal elections as a test case to establish the superiority of the BJP’s Hindutva mantra over Trinamool’s secular politics not just in West Bengal but for India. He believed quite arrogantly, following the BJP’s massive win in the 2019 national elections, that Indian states were ready to fall like a domino to Hindutva only if he lent his magic to the efforts of the BJP in the state assembly elections to fulfil India’s destiny of becoming the Hindu state of the Hindu mythology.

Modi was so obsessed with the Ttrinamool Congress that he sent 22 central ministers to campaign in the state, used the centre’s coercive agencies to browbeat the opposition and used cash aplenty that in the end did not help the BJP. Instead, Mamata Banerjee used the strategy which was palpably one of overkill to claim that the TMC was the victim in the elections and won voters’ approval who ignored the incumbency factor, that she had been in power since 2011 and attempted to return to power for a third time.

The West Bengal elections exposed major weaknesses of both Modi’s leadership and Hindutva. Worse and more ominous for the BJP was that the results hinted that Modi and his party might be walking down the same road which Donald Trump and the Republican Party walked leading to the November 3 elections in the United States. Trump’s mishandling of the Covid-19 pandemic was primarily responsible for not only Trump’s failure to win a second term, but also for the Republican Party losing the Senate and the House.

Modi is, however, in a much worse predicament than Trump. The pandemic in India turned into an apocalypse and continues to worsen that did not happen in the United States. The apocalypse descended upon India soon after some arrogant claims by Modi that India had defeated the novel coronavirus, was ready to launch the world’s biggest vaccine drive and embark on a ‘vaccine diplomacy’ to distribute vaccines to less fortunate countries in Asia and Africa from the Serum Institute of India, the largest vaccine producer in the world. Instead, as India lay at the bottom of the world’s vaccine drive, Indian parks and parking lots in cities were turned into temporary crematoriums, Indian hospitals were caught totally unprepared for the huge virus surge and Indians were dying on the roads, in front of the hospitals, gasping and begging for oxygen.

The Guardian on April 23 wrote that India ‘was living hell’ while Modi campaigned without a mask, and basked in the glory of the huge crowds that turned out without masks in his rallies. The Australian, in an editorial, at about the same time, thus, wrote: ‘Arrogance, hyper-nationalism and bureaucratic incompetence have combined to create a crisis of epic proportions in India, with its crowd-loving PM basking while citizens suffocate.’

Modi said in a virtual meet of the World Economic Forum in late January: ‘Friends, … it was predicted that India would be the most affected country from corona … that there would be a tsunami of corona infections in India.’ He haughtily dismissed that doomsday prediction and claimed instead that India ‘has saved humanity from a big disaster by containing corona effectively.’ Arundhati Roy hit the bull’s between Modi’s tall claims and reality when she said, ‘we are witnessing a crime against humanity’ while speaking on India’s Covid catastrophe.

India reached a figure of 414,000 infections on May 6 and averaged 4,000 deaths a day as the pandemic had raged uncontrolled from April. According to CNN, the unofficial figures of deaths/infections have been many times higher. And with the Indian apocalypse still far from being over, why and how India so quickly descended into, in the words of the Guardian, ‘living hell’, are not difficult to decipher. The elections in the five states including West Bengal B despite warnings from scientists to the contrary, Modi’s huge rallies to boost his political ego and his encouragement to Hindu festivals such as Kumbh Mela without masks to prove the power of Hindutva that made Trump’s super spreader rallies appear amateurish, pushed India over the edge and directly facilitated the apocalypse.

Mamata’s return to power will encourage India’s secular forces immensely now that the BJP has shown the country with the apocalyptic nature of the pandemic where Hindutva and religious fundamentalism is taking the country. Regional parties like secular forces have also taken heart from the TMC victory and failure of the BJP to gain even a single seat in Kerala that the BJP/Hindutva are just not undefeatable any more but very fragile and can be seriously challenged, if they get their acts together. Mamata Banerjee is, thus, seen by these forces as their future leader the same way Jyoti Basu was viewed as a prospective prime minister in the late 1990s.

India’s present political map is also encouraging for the secular and regional forces and ominous for the BJP. It shows the BJP as the party of mainly the Hindi belt where the pandemic has hit the worst. And in the states outside the belt where it is in power, sans Gujarat, the reasons are mainly local like in Assam where anti-Bangladesh sentiments have helped the BJP win again this time.

Modi and the BJP are in no immediate danger of facing the predicament that Trump and the Republicans faced. The next Indian national elections are due in 2024. Nevertheless, there would be state elections in between where Modi’s role and that of the BJP and Hindutva for pushing India into its worse human disaster in living memory would be under the focus of voters. Mamata Banerjee and West Bengal voters exposed the chinks in the armour of the BJP, Hindutva and Modi that will worsen when voters seek, as they undoubted will, answers for the apocalypse when the BJP faces voters in the time ahead, in elections in the states and eventually in 2024 in the centre.

The West Bengal elections were for Bangladesh a matter between the hard rock and the sea. The BJP used Bangladesh’s Muslim identity as bait to energise its base in West Bengal. Modi also used his state visit to Bangladesh to participate in the golden anniversary of Bangladesh’s independence to indulge in communal politics. He visited a major Hindu temple in Satkhira and another of the schedule caste Matuas in Gopalganj to encourage West Bengal voters for the BJP. He ignored the fact that millions of Bangladeshis embraced martyrdom in 1971 to defeat communalism and religious fundamentalism to establish a secular and democratic country.

The BJP government also failed to deliver Bangladesh vaccines for which it paid in advance resulting in an outburst from Beximco, a pro-government business establishment. Beximco’s head of pharmaceuticals blamed India unusually strongly for betrayal. The foreign minister, however, blamed Beximco for obstructing the government’s efforts to buy the Chinese vaccines that added to widespread public disappointment with India. The government did not embarrass New Delhi. Sheikh Hasina, in the spirit of magnanimity that she has always shown to India, sent pandemic relief there at its hour of greatest need.

West Bengal elections will elevate Mamata Banerjee into a national leader. It will also open diplomatic options for Bangladesh that it will not be able to consider yet for a variety of reasons although disappointment with India is rising in the country. Nevertheless, the TMC’s landslide victory with serious dents in the BJP/Hindutva and Modi’s image and the apocalyptic pandemic may encourage New Delhi to be less arrogant about Dhaka’s sensitivities.

Postscript: The BJP’s communal politics paid some dividends. A half of the 77 seats it won in West Bengal were in constituencies reserved for the Dalits where the Matuas are a dominant group.