Osaka 'not sure' Olympics should happen as doubts grow 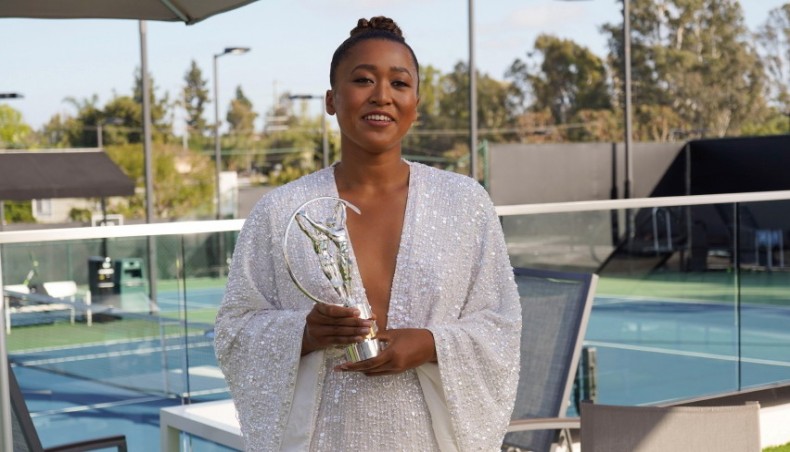 A file photo from May 6, 2021 shows Japanese tennis player Naomi Osaka posing with the Laureus 2021 Sportswoman of the Year award. — Twitter photo

Japanese superstar Naomi Osaka admitted she was ‘not really sure’ the coronavirus-hit Tokyo Olympics should go ahead as doubts grew about the Games just weeks before the opening ceremony.

The four-time tennis Grand Slam winner joined fellow Japanese player Kei Nishikori in raising concerns, with Tokyo and other parts of Japan under a virus state of emergency.

A top politician also warned that Japan still had to make a ‘careful decision’ about whether to hold the Games, which have scant public support according to opinion polls.

Scrapping the 2020 Olympics, postponed last year as the pandemic advanced, is a concept that has never quite gone away, despite repeated assertions from officials that they will proceed.

A survey by a leading Japanese daily released on Monday found 59 percent of respondents want the Olympics cancelled, underlining persistent public concerns over the risk of infections.

Osaka, Japan's biggest sports star and a major gold-medal prospect, said ‘to be honest, I'm not really sure’, when asked if the Olympics should take place as planned.

‘I'm an athlete, and of course my immediate thought is that I want to play in the Olympics,’ the four-time Grand Slam winner told the BBC.

‘But as a human, I would say we're in a pandemic, and if people aren't healthy, and if they're not feeling safe, then it's definitely a really big cause for concern.’

Nishikori said there ‘definitely should be a discussion’ on whether Tokyo should plough ahead.

‘I don't know how much they are thinking about how they are gonna make (a) bubble, because this is not like 100 people,’ he said.

‘It's 10,000 people in the village and playing tournaments. So I don't think it's easy, especially (with) what's happening right now in Japan.’

America's Serena Williams, who has 23 Grand Slam titles -- one off the all-time record -- as well as four Olympic golds, said she was yet to commit to Tokyo.

‘I haven't spent 24 hours without her (three-year-old daughter Olympia) so that kind of answers the question itself,’ she said at the WTA tournament in Rome.

‘I haven't really thought much about Tokyo, because it was supposed to be last year and now it's this year, and then there is this pandemic and there is so much to think about.’

Athletes until now have largely stayed quiet about the Olympics, in contrast to last year when there was a welter of complaints before the historic postponement in March.

A series of test events have been cancelled, postponed or held behind closed doors, underlining the challenges facing organisers.

At a para-athletics rehearsal on Tuesday, competitors told AFP they were training on the assumption the Games would be held.

‘It's only natural that there are voices of disapproval. Can we really hold safe Olympics for everyone under these circumstances? I don't think we can say yes with confidence right now,’ said Tomomi Tozawa, a 100m T63 runner.

‘But as an athlete, until we are told it's cancelled, we need to presume it's going ahead and prepare for that,’ she said.

Another para-athlete, Ikoma Tomoki, said he had ‘a strong desire for them to hold it, even given the circumstances’.

Olympic officials insist the Games can still be held safely and have released rulebooks they say will ensure the biggest international event since the pandemic begandoes not spread the virus.

On Monday, International Olympic Committee president Thomas Bach was forced to cancel a visit to Japan planned for this month, after the state of emergency was extended last week.

Toshihiro Nikai, number two in the ruling Liberal Democratic Party, said Japan needed to take advice from ‘Olympic experts’ before deciding whether to hold the Games.

‘A careful decision will be necessary in the future,’ he said late on Monday, according to the Jiji Press news agency.