Many factories fail to pay wages, festival allowances in time 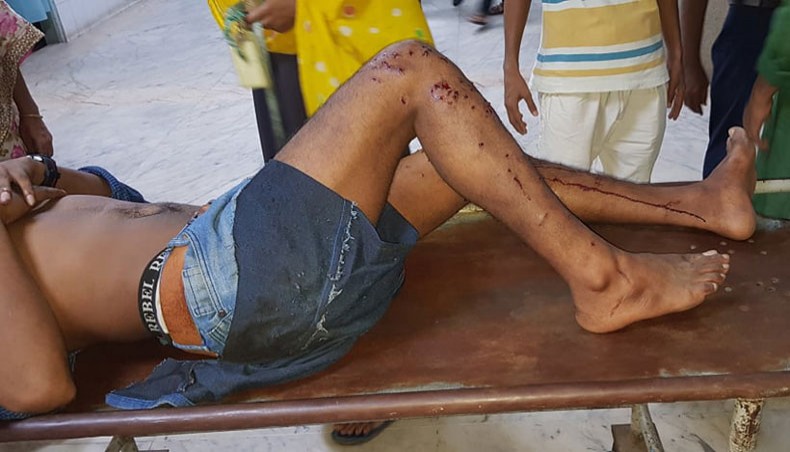 A pellet-hit worker lies on a stretcher at Dhaka Medical College Hospital where he was brought after the police opened fire on garment workers leaving at least 20 workers injured in Gazipur on Monday demanding an extended Eid-ul-Fitr holiday. — New Age photo

Police on Monday opened fire and charged batons on readymade garment workers at Tongi in Gazipur injuring at least 20 workers as they staged demonstrations demanding an extension of the Eid holidays.

Hundreds of workers from different garment factories in Dhaka and Gazipur continued their demonstrations on Monday demanding that the three-day public holidays on the occasion of Eid-ul-Fitr should be extended by up to seven days so that they could celebrate the religious festival with their families.

Meanwhile, many of the factories failed to pay the wages of April and festival allowances to their workers within May 10 as set by the government.

According to the apparel sector trade bodies, 90 per cent of garment factories paid wages for April to their workers till Monday evening while 92 per cent of factories cleared festival allowances.

Industrial police personnel, however, said that around 75 per cent of factories paid wages and festival allowances to their workers till Monday.

The workers from different factories in Tongi and Gazipur on Monday staged demonstrations and blocked roads demanding an extension of the Eid holidays as the factory owners remained stuck to the government decision of not to increase the three-day holiday.

At least 15 readymade garment workers of Ha-Meem Group at Millgate under Tongi in Gazipur sustained bullet injuries when the police opened fire on them while they were demonstrating for the extension of the Eid holidays.

The incident took place at about 11:00am and eight among the injured were undergoing treatment at Dhaka Medical College Hospital.

He said that all the eight injured were being treated at the emergency department of the hospital.

They sustained injuries from the pellets of a shotgun cartridge, the workers and on-duty doctors at DMCH said.

Mijanur Rahman, an injured worker of the garment factory, said at DMCH that one of their fellow workers met the authorities asking for a 10-day vacation.

‘When they allowed us a 7-day vacation, the fellow worker had an argument with them in this regard and he went out from the room. Later, a police member hit the worker on the head. When we wanted to know the reason behind such violence, police opened fire on us,’ said Mijanur.

Gazipur Metropolitan Police assistant commissioner for Tongi Piyus Kumar Dey said that earlier the workers had demanded a seven-day extended Eid holiday, but on Monday, they started rallying for a 10-day vacation. When the factory authorities declined the workers began to protest the decision, he added.

A police officer said that the workers attacked on police personnel at first prompting the police to retaliate by opening fire.

One of the employees of the factory said that the authorities allowed a seven-day Eid holiday for the workers.

Bangladesh Garment Workers Solidarity condemned the firing on workers who were staging demonstration demanding an extension of the Eid holidays.

The labour rights group demanded punishment of the police members who opened fire on unarmed workers and urged the factory owners to allow the leave for which the workers are legally entitled.

staged a demonstration demanding a 12-day Eid vacation as the factory authorities announced a three-day holiday as per the government instruction.

In the face of the protest from the workers, the factory authorities allowed a 10-day Eid vacation for the workers, Industrial Police sources said.

The government has instructed factory owners that the Eid holiday would only be for three days and the workers would not be allowed to go to their native areas to contain the outbreak of the novel coronavirus.

Although the state minister for labour Monnujan Sufian on Sunday once again said that there was no scope to extend the Eid holidays, most of the factory owners allowed 7-10 days Eid holidays to avert labour unrest in their respective units, the sector people said.

On April 29, the state minister in a meeting with factory owners and labour leaders at Shrama Bhaban in the city instructed factory owners to pay workers’ wages and festival allowances by May 10 but many of the factories missed the deadline.

Bangladesh Garment Manufacturers and Exporters Association president Faruque Hassan in a video message on Monday claimed that 90 per cent of the RMG factories paid wages for April and 92 per cent of units cleared festival allowances to their workers in time.

BGMEA is monitoring the factories which have been facing problem in paying wages and allowances to the workers.

One of the officials of Industrial Police, however, said that 75 per cent of factories paid wages and allowances to their workers till Monday.