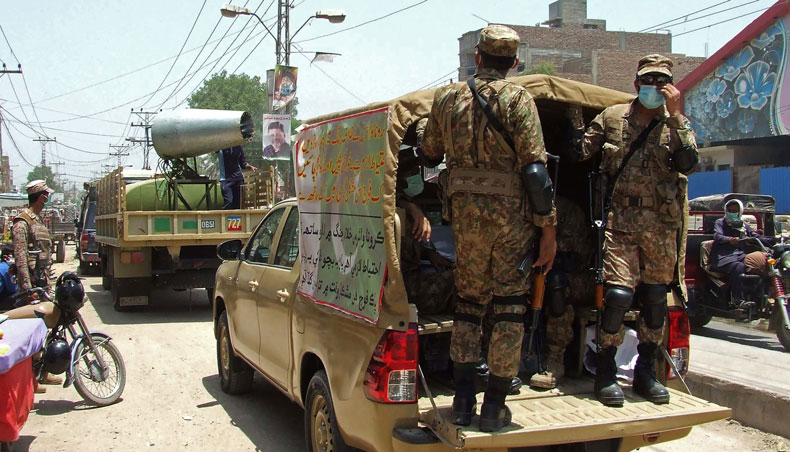 Army soldiers supervise the spraying of disinfectant at a commercial area following new restrictions imposed as a preventive measure against the spread of coronavirus in Pakistan’s southern Sindh province city of Hyderabad on April 30, 2021. — AFP photo

The first attack took place in Quetta, the capital of Baluchistan province and it killed three soldiers and wounded another, the military said in a statement.

It said four soldiers were also wounded when gunmen ‘targeted soldiers patrolling’ in the district of Turbat along the border with Iran.

No one claimed responsibility for the twin attacks and the military provided no further details.

Baluchistan is the scene of a long-running insurgency by small Baluch secessionist groups, which for decades have staged attacks to press their demands for independence. Pakistani Taliban and other extremists also have a presence in Baluchistan, which witnessed an increase in such attacks in recent weeks.

Pakistan shares a long border with Afghanistan and Iran. The military said it had completed about 85 per cent of the fence along the boundary with Afghanistan, and fencing of the border with Iran was also underway to contain the movement of militants and to curb smuggling.