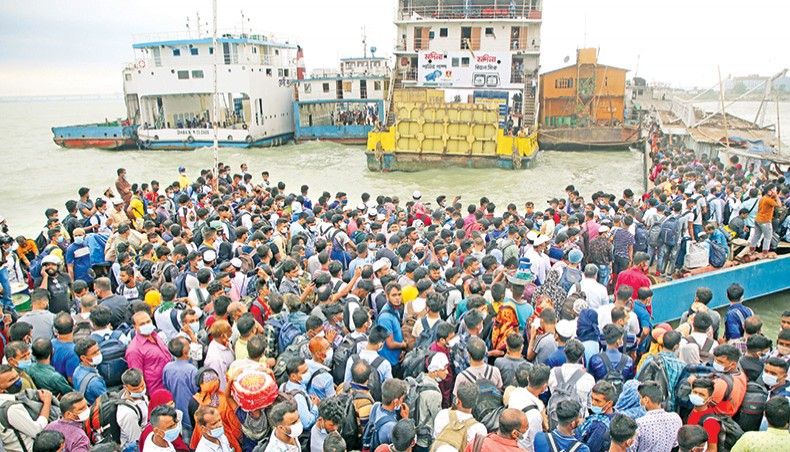 Thousands of people crowd Shimulia Ferry Terminal in Munshiganj on Sunday even after the ferry services were suspended the day before and BGB personnel were deployed to restrain the people on their way to their village homes ahead of Eid. — Sony Ramany

Streams of people continued to get out of the capital city for their village homes across the country on Sunday to celebrate Eid-ul-Fitr violating the government Covid restrictions on movement and ignoring risks of getting infected with the deadly virus.

South-west bound travellers crossed the Padma River by trawlers operating illegally as the government has deployed personnel of the Board Guard Bangladesh besides the police and other agencies to check the rush of people at the ferry terminals in Munshiganj and Manikganj in particular.

The vacationers of northern districts, too, left for home on intra-district buses, small transports and private vehicles on the Dhaka–Tangail highway.

About a 20-kilometre-long tailback was created on the Dhaka–Aricha highway due to the frenzied rush of homebound people ahead of Eid, reports United News of Bangladesh.

In the absence of long-distance public transports, people hired microbuses, pick-up vans, and private vehicles to leave for their destinations.

Besides, many people also travelled in goods-laden trucks.

The mad rush out of Dhaka and adjacent areas continued at a time when the deadly Indian variant of the corona virus was found in Bangladesh.

The reckless travelling of people in violation of health regulations may spread the more contagious Indian variant of the novel coronavirus, according to health experts.

The New Age correspondent in Munshiganj reported that a frantic rush of people out of Dhaka and adjacent areas was noticed from the morning.

The pressure of travellers rose over time while several hundred people forcibly got on the two ferries operated to carry ambulances and several thousand others crossed the river by trawlers.

Additional superintendent of the Munshiganj police Md Asaduzzaman said that BGB and police personnel strengthened their surveillance but many people managed to cross the river by trawlers.

‘We are trying to send back people to Dhaka through counselling,’ he said.

The New Age correspondent in Tangail said that hundreds of people continued their journey home in small vehicles like CNG-run auto rickshaws, three-wheelers and motorbikes.

Many people were seen to cross the Bangabandhu Bridge as pillion riders as the bridge authority was not allowing buses to cross it.

Witnesses, however, said that some buses managed to cross over the bridge in the morning.

Elenga police outpost in-charge Yasir Arafat said that they were conducting operations against bus movement while many smaller public vehicles were on the road.

Locals said that many homebound people hired small vehicles for short distances to cover long distances to reach their destinations.

Our Manikganj correspondent reported that the ferry services on the Paturia–Daulatdia and Aricha–Kazirhat routes remained suspended.

In the capital city, people in groups were seen passing through different exit points on foot and by shared cars, microbuses, CNG-run auto-rickshaws, motorcycles and even goods-laden vehicles.

Travellers, mostly low-income people, underwent immense sufferings as they had to change vehicles at different points, travel even by trucks, keep standing in the sun for long hours and pay higher fares.

People in the capital and other cities as usual ignored social distancing, did not wear masks properly and hardly used sanitiser on the 26th day of the current restrictions.

Popular shopping malls, shops, makeshift shops on footpaths and kitchen markets were flooded with customers throughout the day across the country.

The Cabinet Division on Wednesday extended the current Covid restrictions till May 16 and allowed the intra-district road public transport services after 22 days while kept the ban on train, launch and inter-district bus services in force.

The government has also allowed all banks to continue their activities daily for a limited duration since April 14, permitted domestic flight operations on all but the Cox’s Bazar route since April 21 and reopened shops and shopping malls since April 25.

The novel coronavirus has infected 7,73,513 and killed 11,934 people in Bangladesh till Sunday, according to the Directorate General of Health Services.