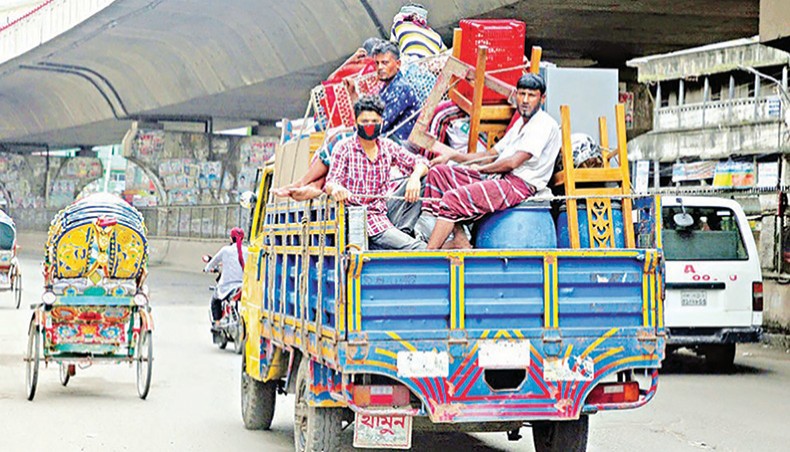 A file photo shows people leaving the capital with their belongings on a truck recently due to income losses amid the coronavirus outbreak in the country. — New Age photo

Experts on Sunday demanded an increased allocation in the national budget for the fiscal year 2021-22 for direct cash transfer and food support to disadvantaged communities hit hard by the Covid-19 outbreak.

The government should also allocate more resources for micro, small and medium enterprises to protect employment, they said at a virtual media briefing.

The Citizen’s Platform for SDGs Bangladesh organised the briefing on the national budget for the FY 2021-2022: what should be there for the disadvantaged people.

The country also needs to create an integrated data base of potential recipients of government supports, including the social safety net, they said.

The government also needs to press all four triggers—consumption, investment, government spending and net export — as midterm approach under the budget, they said.

A minimum two- or three-year time frame to have a robust recovery strategy with core budget, integrating recovery efforts with structural transformation needs and targeted discretionary support to the disadvantaged communities is critically important, they observed.

Although the current Covid situation has adversely affected every citizen of Bangladesh, the impact of pandemic on the marginalised and disadvantaged people is much greater, they said.

Specific policies are needed for these vulnerable groups and the right direction to implement them, they added.

The platform convener, also the distinguished fellow of the Centre for Policy Dialogue, Debapriya Bhattacharya, said that employment was being restored with low skills and low-income jobs with extensive under-employment, growing indebtedness and deepening inequality were increasing during the second wave.

The socio-economic impact and the disproportionate impact on traditionally marginalised communities, low income and low middle-income people will be more protracted than the immediate health emergencies, he said.

He said that current circumstances demanded a special attention to consumption protection of the poor and low-income people, employment promotion at MSME level, boost private investment and public expenditure.

The disadvantaged population of the country bears the disproportionate adverse impact of lower implementation rate of the annual development programme, he said.