The new concern of Indian variant 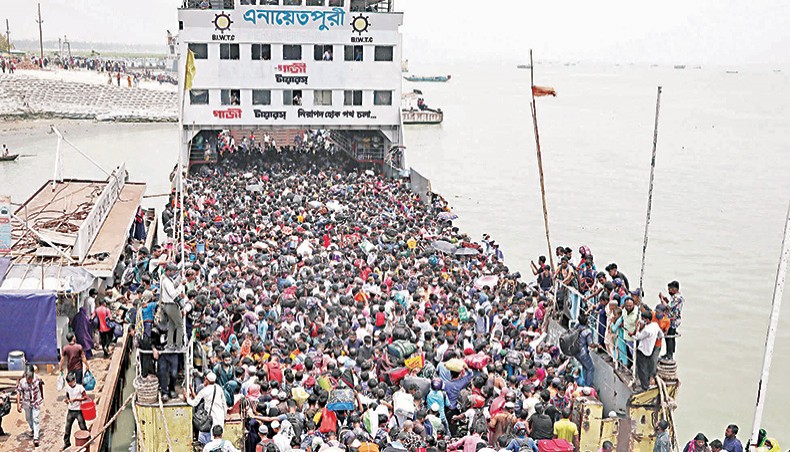 People huddle in a ferry to leave Dhaka before Eid-ul-Fitr. Such a situation raises concern of a more virulent surge in Covid infection in Bangladesh. — New Age/Sony Ramany

SARS-CoV-2 is changing forms, one after another. While scientists are working tirelessly towards developing drugs and vaccines against the virus, the virus also keeps changing its forms challenging their efforts.

Viruses constantly change through mutation to give new variants of themselves. Since the emergence of Covid-19, more than 4,000 mutations have taken place in the spike protein alone. However, most of these variants caused by mutations do not carry any special significance.

A variant only becomes important when it is found to be more infectious than the original virus, causes more serious illness, spreads faster, or is able to escape immunity acquired through previous infections or vaccinations. Some of such variants of coronavirus have been found responsible for fresh surge in the pandemic in different parts of the world. So far, scientists have identified four such variants, namely the UK variant (B.1.1.7), the Brazilian variant (P.1), the South African variant (B.1.351) and the Californian variant (B.1.429). These variants are referred to as variants of concern. The latest addition to this list may be a new variant detected in neighbouring India — the Indian variant, B.1.617. However, although this variant seems to be worrisome, its status has not yet been confirmed and so it is still considered a variant of interest. The UK regulatory authority, Public Health England, have categorised it as a ‘variant under investigation.’

Recently, the Covid outbreak has taken a very dangerous turn in India. The case numbers and death toll had started to drop in India last September, after a high of around 100,000 infections and 1,000 deaths per day, and by mid-February this year it dropped to an all-time low of about 10,000 and 100, respectively. But they began to rise again in March, and according to the latest statistics, the number of daily infections has crossed 400,000 and the number of deaths per day has exceeded 3,500.

It was like lightning without clouds. By mid-February, when the infection had reached its lowest level ever, many assumed that perhaps the worst of the pandemic had been over. Antibody studies conducted by the National Institute of Epidemiology in Chennai in December 2020–January 2021 estimated that more than 50 per cent of the population in some areas of India’s major cities and about one-fifth of India’s total population had already been exposed to the virus, which should have conferred them some immunity. These figures made some researchers optimistic that the next stage of the pandemic would be less severe, says Ramanan Laxminarayan, an epidemiologist in Princeton University, New Jersey, who is based in New Delhi.

But the reality has been exactly the opposite. Why did the infection suddenly rise again with such a meteoric speed? What could be the underlying cause? Was it because people let their guards down and began to mix and move recklessly as they saw that the cases were declining, and the vaccination campaign has begun? Or was it due to emergence of a new, more infectious variant? It is not clear yet what actually triggered the surge. However, the new variant, B.1.617, dubbed as ‘double mutant’, has drawn particular attention of scientists.

What makes this variant unique is the combination of two ‘infamous’ mutations in its spike protein that were found separately in some of the previously identified dangerous variants, but not together. That is the basis of dubbing it ‘double mutant’. This does not necessarily mean that it contains just two mutations; it has rather more than a dozen. One mutation, E484Q, is similar to the E484K mutation in the Brazilian variant, the South African variant and some strains of the UK variant. Studies suggest that this mutation reduces the effectiveness of antibodies produced by previous infections or vaccinations. The second mutation, L452R, has previously been detected in the Californian variant. This mutation increases viral transmission by around 20 per cent and reduces antibody efficacy by more than 50 per cent, says Dr Anurag Agrawal, the director of CSIR-IGIB, India. So, it is clear that the presence of these two mutations together makes the virus more infectious and may let it evade antibodies produced by vaccination or previous infection. So, in theory, there is enough ground to consider it as a ‘variant of concern’. ‘The B.1.617 variant has all the hallmarks of a very dangerous virus,’ William A Haseltine, a former professor at Harvard Medical School wrote in a recent article in Forbes.

The question now is whether the practical evidence suggests this variant to be responsible for the recent surge in infections in India. There is good reason to believe so, as far as the genome sequencing data published in media are concerned. According to outbreak.info, a website tracker for Covid-19, the average prevalence of the variant in India surged to as high as 52 per cent of samples sequenced in April from almost nothing in January. Meanwhile, the National Institute of Virology in Pune, India reported that of 361 samples taken and sequenced in Maharashtra, the epicentre of recent outbreak, from January to March, 220, ie, 61 per cent, had the double mutation E484Q and L452R.

In addition to the results of genome sequencing, there is one more thing to note here. Dr Zarir Udwadia, a clinician-researcher at PD Hinduja Hospital and Medical Research Centre in Mumbai, anecdotally observes that entire households are now getting infected — unlike in the first wave of Covid-19, when single individuals would test positive. He attributes this to the presence of more-infectious variants.

Experts, however, think it would be too early to conclude that this variant was responsible for the recent surge. One reason is that the number of samples sequenced so far was very small compared with the number of cases. ‘This sample size (ie, 361 samples) is too small to conclude as Maharashtra has been conducting nearly two lakh tests per day’, a senior genome sequencing expert said. Echoing that, Dr Gangandeep Kang, professor of microbiology at Christian Medical College, Vellore, said that 60.9 per cent samples carrying this variant ‘most likely’ showed a link between the mutation and the surge — however, for an accurate answer at least 1 per cent of Covid-19 samples must be sequenced every week. With India at present testing over one lakh cases daily, this would translate to roughly 1,000 genome sequences every day.

Although it seems to be more infectious, clinical anecdotes from doctors suggests that the variant is less virulent. Most patients can do with home isolation and do not require hospitalisation. ‘Most patients are asymptomatic and that is a good indication. But in absolute numbers so many cases have put a burden on health infrastructure,’ said Dr Shashank Joshi, an expert on the Maharashtra Covid Task Force. Further, research suggests that the Indian vaccine, Covaxin works well against this variant. If that is true, there will be some mitigation to concerns over efficacy of vaccines against this variant.

The variant B.1.617 was first detected in India in October. According to the World Health Organisation, this variant has already spread to at least 17 countries across the world, including the United Kingdom and the United States. However, it has spread the most in India. What is gravely concerning is that the highly contagious Indian variant of Covid-19 was, as the IEDCR reports, detected in the samples of two persons, who recently had visited India, in Bangladesh on Saturday.

Therefore, it is necessary for Bangladesh to come up with an action plan right now. Amid devastating surge in Covid-19 infection in India and concerns over the new variant, Bangladesh, like many other countries in the world, imposed restrictions on the entry of travellers from India. However, it is not enough to impose such restrictions, quarantine returnees or sequence their samples. There is a need for massive sequencing initiatives by collecting samples from different parts of the country so that the variant can be quickly identified

If it is found to have already spread, necessary action can be taken immediately. Another issue is that as many people as possible need to be vaccinated in the quickest possible time so that the infection does not spread. This is because the more the virus spreads, the more likely it is to mutate. This can lead to the emergence of new variants, against which existing vaccines may not work well.

One more thing needs special attention. The recent resurgence in the Covid infection in Bangladesh and India, after apparently having come down under control, showed that this deadly germ is very cunning, deceitful. After going on the back foot for a while, it can change its form and hit back again with renewed vigour. So, there is no chance to be complacent even for a moment by looking at the statistics or thinking that I have been vaccinated. Remember, this deadly germ can attack you at the very moment of momentary carelessness. Therefore, you should always carry protective armour, such as hand washing/sanitisation, wearing a mask, maintaining physical distance, and avoiding public gatherings, until you receive a convincing message that the killer has been completely eradicated. There is no chance of even minimal relaxation here.