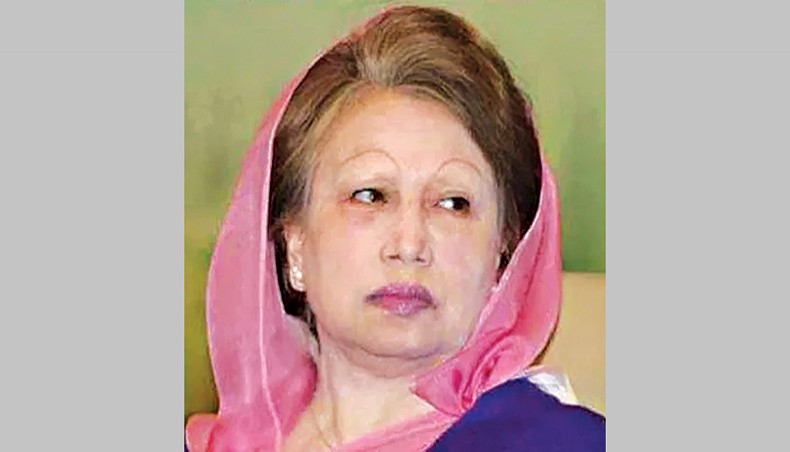 The government on Sunday rejected an application filed by the family of the ailing Bangladesh Nationalist Party chairperson and former prime minister Khaleda Zia for allowing her treatment abroad.

Home minister Asaduzzaman Khan, after receiving the law ministry’s opinion on her family’s petition, in a press briefing at his Secretariat office on Sunday afternoon told reporters that the application could not be accepted as Khalda Zia is a convict.

‘The law ministry in its opinion has clearly mentioned that there is no scope in the law to accept the application as there is no precedence of allowing any convict for treatment abroad,’ the home minister said.

‘Her [Khaleda Zia’s] conviction has been suspended under Section 401 (1) of the Code of Criminal Procedure. There is no scope of accepting the application [of Khaleda Zia’s family] under the section for her treatment abroad,’ Asaduzzaman said.

Prime minister Sheikh Hasina, he said, has suspended the conviction of Khaleda Zia on humanitarian grounds and allowed her to take treatment as per her choice staying at her residence.

But as per the law there is no way to allow Khaleda to receive treatment abroad, the home minister said.

‘You people [journalists] are aware that she [Khaleda] has been convicted in courts... Now she is in prison,’ he added.

Earlier in the morning on the day, the law ministry in a press release said that their recommendations, issued by law minister Anisul Huq regarding former prime minister Khaleda’s treatment abroad, were sent to the home ministry.

After receiving the application the home ministry forwarded it to the law ministry on the night for its opinion.

BNP secretary general Mirza Fakhrul Islam Alamgir, a couple of hours before the home minister’s briefing, in a virtual press conference said that the BNP chairperson’s health condition was improving.

‘She [Khaleda Zia] has already tested negative for the virus and she is gradually recovering from the post-Covid complications she has been suffering,’ Fakhrul said.

After receiving the application from Khaleda’s family, the law minister in a press conference on Thursday said that the judiciary had no role in the matter of the application as Khaleda’s conviction in two cases had been suspended on an executive order.

‘Her conviction was suspended under Section 401 of the Code of Criminal Procedure with two conditions,’ Anisul said, adding that there is a scope in the section of suspending any conviction with or without conditions.

‘The section has already been implemented in her case. Now we need to see whether the conditions could be relaxed,’ he said.

According to BNP leaders, the party and Khaleda’s family were planning to send her to a hospital in Singapore by an air ambulance as she was not fit enough to travel to London, where his elder son Tarique Rahman and most family members live.

But the ultimate intention of the family is to send Khaleda Zia to London, they said.

After Khaleda was tested positive for Covid-19, she on April 15 underwent a CT scan which showed a very nominal lung infection.

She again tested Covid positive in a second test on April 24.

Khaleda was admitted to Evercare Hospital on April 28 for some tests but after hospitalisation, her condition deteriorated and she was shifted to the coronary care unit with breathing problems.

Khaleda was convicted in two cases.

On October 30, 2018 the High Court doubled her five-year jail term in the case.

She was sentenced to a seven-year jail term in the Zia Charitable Trust graft case on October 29, 2018.

The time of suspension of her convictions was extended for further six months on September 25, 2020.

The suspension was extended for another six months for the third time on March 15, 2021 on the same conditions.

The BNP terms all the cases against Khaleda as false and fabricated.