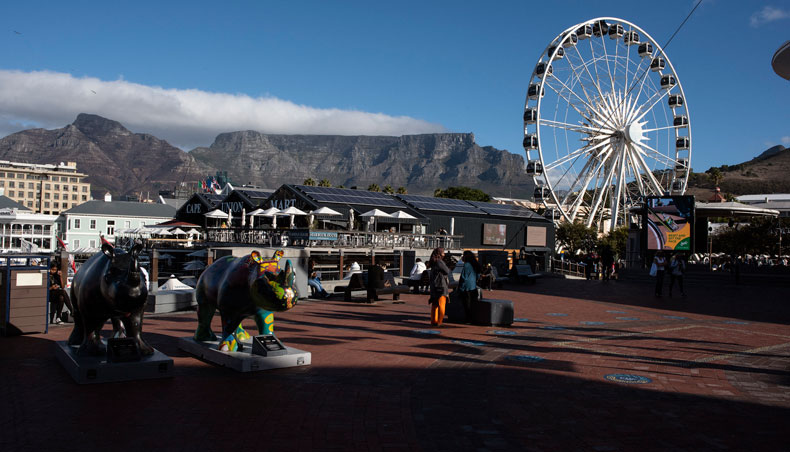 A view of the V&A Waterfront, which usually attracts millions of visitors every year, is now sparsely populated, in Cape Town on April 28, 2021. — AFP photo

The novel coronavirus has killed at least 32,84,783 people since the outbreak emerged in China in December 2019, according to a tally from official sources compiled by AFP at 10:00 GMT on Sunday.

Based on latest reports, the countries with the most new deaths were India with 4,092, followed by Brazil with 2,202 and the United States with 653.

The country with the highest number of deaths compared to its population is Hungary with 295 fatalities per 1,00,000 inhabitants, followed by the Czech Republic with 277, Bosnia-Herzegovina with 268, Montenegro 245 and the Republic of North Macedonia 244.

South Africa’s health ministry on Saturday said four cases of a coronavirus variant fuelling a devastating surge of Covid-19 in India had been recorded in the country.

‘The four cases of B.1.617.2 have been detected in (the provinces of) Gauteng (2) and KwaZulu-Natal (2) and all have a history of recent arrival from India,’ health minister Zweli Mkhize said in a statement late Saturday.

Eleven cases of another variant first detected in the United Kingdom and known as B.1.1.7 have also been found, the statement added, noting that community transmission of that variant had ‘already set in’.

South Africa is at least the fourth country on the continent to pick up the B.1.617.2 variant, alongside Kenya, Uganda and Morocco.

India is grappling with an explosive coronavirus outbreak widely attributed to the variant, which has now been found in more than a dozen countries worldwide.

South Africa has not yet joined the growing number of countries worldwide that have banned flights from India to limit the spread of its variant.

Mkhize said travel restrictions would ‘need to be balanced against scientific realities’ to protect the economy of Africa’s most industrialised nation.

An announcement will be made once the cabinet has consulted on the matter, he added.

South Africa is the continent’s worst virus-hit country, accounting for more than 34 percent of all cases in the region.

The country’s second coronavirus wave, which peaked earlier this year, was driven by a local, more infectious coronavirus variant known as B.1.351.

Mkhize earlier this week raised the alarm over ‘a worrying trend of increasing numbers of detected cases’ in certain provinces.

He warned of a looming third wave of infections likely to coincide with the upcoming southern hemisphere winter.

To date, the country has recorded more than 1.59 million coronavirus cases, of which more than 54,700 have been fatal.