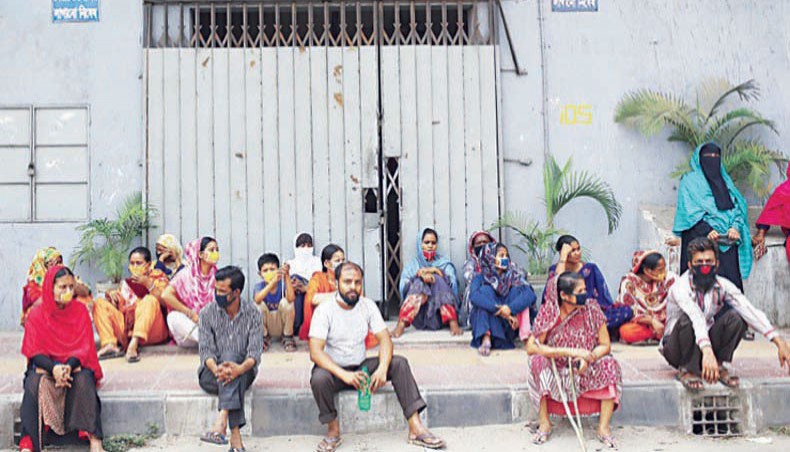 A file photo shows workers protesting against non-payment of wages in front of a readymade garment factory in the capital. Twenty-five per cent of the government stimulus loan-receiving garment factories has cut headcounts in violation of conditions associated with the loans, according to a study conducted by the Centre for Policy Dialogue and the Shojag Coalition Study.— New Age photo

Twenty-five per cent of the government stimulus loan-receiving garment factories has cut headcounts in violation of conditions associated with the loans, according to a study conducted by the Centre for Policy Dialogue and the Shojag Coalition Study.

The study report was released at a webinar titled ‘Corporate Accountability of the RMG sector in view of Covid Pandemic: Challenges in Ensuring Workers’ Well-being’ on Saturday.

The government has so far allocated Tk 10,500 crore to the garment factory owners as stimulus to support them pay the workers’ wages and allowances.

‘However, 25 per cent of the factories violated the order of not retrenching workers,’ said the study report.

‘If the workers were not retrenched or paid as per law, the livelihood challenges would not be so worse. This responsibility cannot be ignored by the factory management,’ the report said.

Attending the webinar as chief guest, commerce minister Tipu Munshi said that it was the duty of the factory owners to ensure that workers received just dues for their labour.

He also said that factory owners were not receiving the same prices for their products what they got previously.

During the pandemic, the majority of factories received benefits which were announced under the stimulus package, the study report said.

It said that the majority of workers did not know whether their factories received any benefit from the government.

The impact of Covid-19 outbreak was comparatively higher on workers who lost their jobs and remain unemployed.

Unemployed workers received a limited amount of support from the government and the non-government organisation, the report said, adding that lack of proper planning in disbursement of support deprived female unemployed more.

Worker wages have increased by 5 per cent after a year, however, their household income has declined by 0.7 per cent. Workers’ income alone is not sufficient to ensure workers’ livelihood requirement.

The majority of enterprises are struggling to reach the elementary level of corporate accountability in the RMG sector.

Workers do not feel free in speaking against any malpractices as they feel threatened to be blacklisted which would stop getting job in the RMG sector in future, the study observed.

‘Workers can hardly challenge the decision of their removal even it seems unfair or illegal to them,’ it said.

Only 41 per cent of employers claimed that they cleared all the dues of workers during laying off or retrenchment, the study report said.

Kalpona Akter, executive director of the Bangladesh Center for Workers’ Solidarity, said that the Bangladesh Garment Manufacturers and Exporters Association should share more information on the arbitration settlement process.

BGMEA president Faruque Hassan said that the BGMEA’s arbitration cell was very active and he would work towards ensuring the recommendations to share more information on arbitration settlement process.

He also said that that they were not aware of using central data base against workers.

He also mentioned that he welcomes further social dialogues.

Sara Hossain, honorary executive director of the Bangladesh Legal Aid and Services Trust, suggested including labour courts in the virtual court processes and allowing the courts to conduct alternative dispute resolution and give emergency orders.

Mohammad Hatem, first vice-president of the Bangladesh Knitwear Manufacturers and Exporters Association, said that there was a need for responsible trade unions.

He said that layoffs and non-payment of wages did not occur on a large scale.