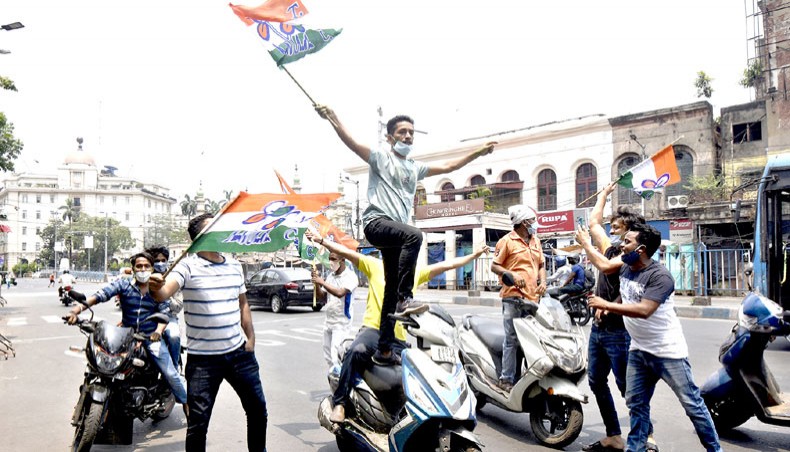 Supporters of the Trinamool Congress party celebrate their party’s lead in the West Bengal state legislative assembly elections during counting in Kolkata on May 2. — Agence France-Presse

THE much-awaited results of the crucial elections to the legislative assemblies of West Bengal, Tamil Nadu, Kerala, Assam and Puducherry were out on May 2. The BJP won, as expected, in Assam and Puducherry. It got a resounding drubbing in Kerala. In Tamil Nadu, the DMK won. It is, however, West Bengal which has made a big dent in Narendra Modi’s popularity. Coupled with his incompetence during the pandemic, his defeat is certain to affect his popularity and his chances in the general elections in 2024, though it would be hazardous to predict the outcome today.

West Bengal is a different story. No prime minister since independence has invested his prestige and power in a state assembly election as Modi did along with Man Friday Amit Shah. They held large and numerous rallies throwing all the rules of safety during the pandemic to the wind. Both had reckoned without the fiery Mamata Banerjee, chief minister of West Bengal and founder-president of the Trinamool Congress.

In this entire episode the Election Commission of India’s role has come in for harsh criticism. It moved the supreme court for expunction of the Madras High Court’s remarks. On May 3, the apex court refused to do so.

The court observed that the remarks of the Madras High Court were made in the ‘larger public interest’. The Madras High Court has expressed orally that ‘Election Commission officers should be booked on murder charges’ for ‘not stopping political parties from wanton abuse of Covid-19 protocol’ in election times. The Election Commission dubbed these remarks as ‘uncalled for, blatantly disparaging and derogatory’.

The Madras High Court had made these observations on April 26. It said that murder charges should probably be imposed on the Election Commission of India for being ‘the only institution responsible for the situation we are in today’. It had permitted large rallies in Madras and more so in West Bengal where its partisanship was blatantly heedless of criticism.

The poll there was spread over weeks. Modi and Shah’s massive rallies went unchecked. When the results came out, Mamata Banerjee bitterly complained that the electronic voting machines in her constituency, Nandigram, had been tampered with. She lost in this constituency though she swept the polls in the entire state. The Election Commission sat mute while Modi and Shah addressed massive rallies for weeks in breach of the rules mandating ‘social distance’.

Belatedly, on April 22, the commission banned road shows, rallies and public meetings with more than 500 people for the remainder of the West Bengal election after finding that political parties and candidates were flouting the Covid norms. The commission said it noted ‘with anguish’ that several political parties and candidates were not following safety norms at public gatherings which made it hard for the election machinery to enforce directions.

The defect is institutional. The government enjoys unfettered power in the appointment of the chief election commissioner and his associates. This is what Dr BR Ambedkar, chairman of the Constituent Assembly’s drafting committee, confessed on June 15, 1949:

‘Now with regard to the question of appointment I must confess that there is a great deal of force in what my friend Professor Saksena said that there is no use making the tenure of the election commissioner a fixed and secure tenure if there is no provision in the constitution to prevent either a fool or a knave or a person who is likely to be under the thumb of the executive. My provision … does not contain anything to provide against nomination of an unfit person to the post of the chief election commissioner or the other election commissioners. I do want to confess that this is a very important question and it has given me a great deal of headache.

‘In the USA they have solved this question by the provision contained in Article 2 Section (2) of their constitution whereby certain appointments … cannot be made by the president without the concurrence of the Senate; so that so far as the power of appointment is concerned, although it is vested in the president it is subject to a check by the Senate … The drafting committee had paid considerable attention to this question because … it is going to be one of our greatest headaches and as a via media it was thought that if this assembly would give or enact what is called an instrument of instructions to the president and provide therein some machinery which it would be obligatory on the president to consult before making any appointment, I think the difficulties … may be obviated and the advantage which is contained therein may be secured.’

Dawn.com, May 8. AG Noorani is an author and a lawyer based in Mumbai.