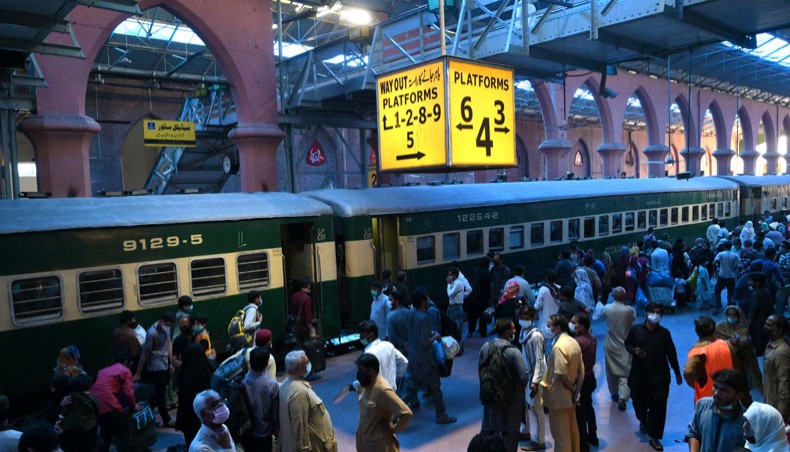 Passengers gather on a railway station as they prepare to board a train to their hometowns during Ramadan ahead of Eid-ul-Fitr festivities in Lahore, Pakistan on Saturday. — AFP photo

Pakistan on Saturday began a nine-day shutdown affecting travel and tourist hotspots in a bid to prevent a surge in Covid cases during the Muslim holiday of Eid-ul-Fitr.

Already battling a third wave of infections and increasingly nervous about the crisis across the border in India, the government has imposed the most severe restrictions since a one-month lockdown in April last year.

‘These measures have been necessitated by the extremely dangerous situation which has been created in the region with the spread of virulent mutations of the virus,’ tweeted planning minister Asad Umar, who has been leading the government response to the outbreak.

Eid, which comes at the end of the Muslim holy month of Ramadan, usually sees the mass movement of people around the country and tourist spots crowded with Pakistanis.

Last year the country saw a spike in cases in the weeks after the celebrations.

Businesses, hotels and restaurants as well as markets and parks will be closed, while public transport between provinces and within cities has been halted.

The military has been mobilised to monitor the restrictions.

Mosques, however, which have been packed each night throughout Ramadan — with few people wearing masks — will remain open. Authorities fear curbs on places of worship could ignite confrontation in the deeply conservative Islamic republic.

Impoverished Pakistan has recorded more than 850,000 infections and 18,600 deaths, but with limited testing and a ramshackle healthcare sector, many fear the true extent of the disease is much worse.

Health officials have warned that hospitals are operating at close to capacity and they have rushed to increase the number of intensive care beds.

International flights have been slashed and border crossings with Iran and Afghanistan closed, except for trade.

Flights and land crossings with neighbouring India — reeling from a devastating outbreak with hundreds of thousands of new cases a day — were closed before the pandemic because of political tensions.

Pakistan, which has so far vaccinated only a fraction of its population, received its first batch of 1.2 million AstraZeneca doses Saturday under the delayed Covax global vaccine sharing scheme.

Passengers gather on a railway station as they prepare to board a train to their hometowns during Ramadan ahead of Eid-ul-Fitr festivities in Lahore, Pakistan on Saturday. — AFP photo