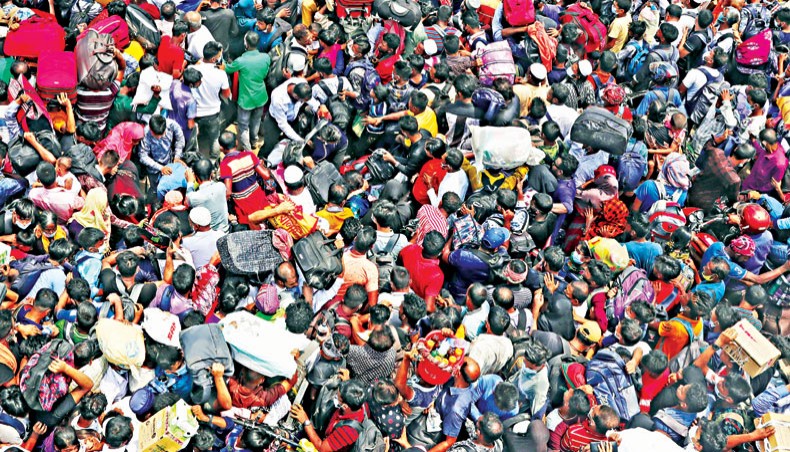 People defying health rules crowd the deck of a ferry at Shimulia Ferry Terminal in Munshiganj on Saturday. — Sony Ramany

The health authorities of Bangladesh on Saturday confirmed the detection of the Indian variant of the coronavirus, which is highly contagious and deadly, in the country.

Against this backdrop, the government has extended the suspension of passenger travel to and from India through the land ports for another 15 days, from May 9 to May 23, foreign ministry secretary (east) Mashfee Binte Shams told New Age on Saturday.

‘The DGHS is concerned over this revelation. People should also be worried about it,’ she told reporters at an impromptu press briefing at the health agency.

She said that all the virus carriers returned to the county from India in late April.

After they came back through the Benapole land port, the samples of eight people were tested at Jashore University of Science and Technology, which found the presence of the Indian variant — B.1.617.2 — in six of them.

For further confirmation the eight people were tested at the Institute of Epidemiology, Disease Control and Research in Dhaka, which, too, found the same results, Nasima said.

Two of them carried a similar version of the Indian variant while four carried a closely similar variant, she added.

Without disclosing the demographic details of the six persons, Nasima said that they were now doing ‘well’ in isolation.

After the revelation, the senior health official urged all to exercise utmost caution and prudence in stopping the deadly virus variant from spreading in the country.

‘It’s high time we showed utmost caution to prevent a devastating situation that India is going through,’ Nasima said.

‘You, who are now travelling across the country to celebrate Eid, should realise that you are intending to share joy with your families during Eid, but you are also a potential threat to your family,’ she warned.

After India has faced a health catastrophe due to the surge in Covid cases and deaths, Bangladesh has closed the border with the country since April 26.

But still a large number of people are entering the country from India, according to officials.

Since April 26 at least 5,785 people have entered Bangladesh from India through land ports, according to DGHS record.

Everyone coming from India, Nasima said, is mandatorily being kept in a 14-day quarantine.

The decision to extend the suspension of passenger travel to and from India was taken in an inter-ministerial meeting on Saturday with foreign secretary Masud Bin Momen in the chair.

The suspension was initially imposed on April 25 for a fortnight with provisions that Bangladesh people, who would be willing to return home from India, should get clearance from Bangladesh missions before starting their return journey to the country.

The government has allowed entry of such people only through three land ports — Benapole, Burimari and Akhaura — out of the 12.

The government might impose stricter restrictions to discourage sudden and unnoticed crossings into the country as the quarantine facilities in and around the three designated land ports are inadequate, Mashfee added.

The New Age correspondent in Jashore reported that Benapole quarantine facility was overcrowded with returnees from India.

Tamijul Islam Khan, deputy commissioner of Jashore, said that he was informed by the Bangladesh deputy high commission in Kolkata that 2,500 Bangladeshis were given permission to return to the country through the Benapole land port.

‘Too many people have been quarantined in the bordering districts of Jashore, Khulna, Satkhira, Jhenidah and Narail as the quarantine facility in Benapole has been overcrowded,’ the deputy commissioner said.

India returnees have been kept at residential hotels in different places, he added.

Senior virologist Nazrul Islam said that people entering from India should be strictly quarantined and isolated.

He said that those who were entering the country should also be strictly subjected to contact-tracing in preventing the spread of the variant in Bangladesh.

Nazrul, a former vice-chancellor of Bangabandhu Sheikh Mujib Medical University, also warned that the increased movement of people before and after Eid-ul-Fitr might bring about a serious consequence.

‘The positivity rate will rise after Eid,’ he feared as massive numbers of people are going home to celebrate Eid despite the government’s ban on movement.

The World Health Organisation last week said that the Indian variant had been found in at least 17 countries.

According to Public Health England on Friday, the coronavirus variant B.1.617.2 that was first detected in India would be classified as a ‘variant of concern’ due to the evidence that it is more transmissible, said international media reports.

A ‘tsunami’ of coronavirus infections has engulfed India, setting new world records of cases over the past few weeks.

The second wave has hit India with such ferocity that hospitals are running out of oxygen, beds and antiviral drugs. Many patients are being turned away due to lack of space.

India on Saturday registered 4,01,078 new Covid cases, taking the country’s caseload to over two crore 18 lakh, according to the Union health ministry of the country.

The Indian variant is spreading beyond the country’s borders, and lately Nepal has witnessed a rapid rise in coronavirus cases attributed to the more deadly variant.

Bangladesh experienced a sudden surge in Covid cases, deaths and positivity rate from the beginning of March to the past week following a comparatively better situation in January-February.

In the past few days the positivity rate remained below 9 per cent.