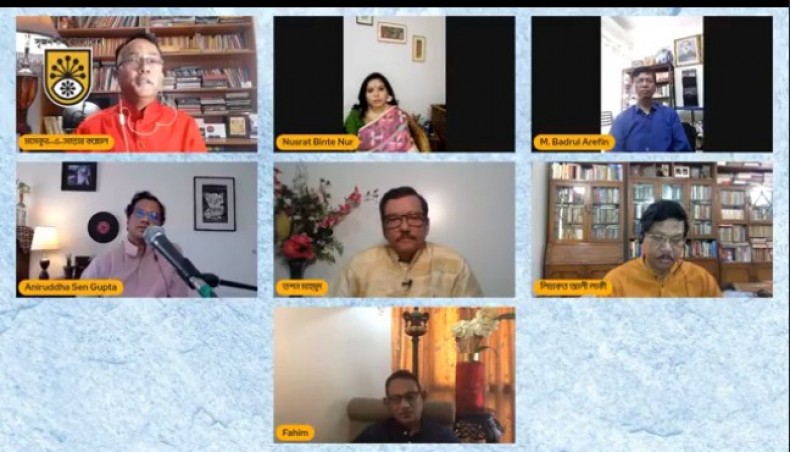 The 160th anniversary of the birth of the Nobel laureate Rabindranath Tagore is being celebrated virtually today due to the Covid situation.

The state-run Bangladesh Television and private TV channels aired a recorded programme titled Rabindra Jayanti 1428, which featured performances by artistes of cultural organisation Surer Dhara and the founder of the organisation renowned Tagore singer Rezwana Choudhury Bannya. The programme was organised by cultural affairs ministry in association with Surer Dhara.

Bangladesh Shipakala Academy streamed an online programme featuring discussion, songs, dance recitals and recitations on its Facebook page at 11:00am.

Chhayanaut will stream a programme titled Dharo Nirbhoy Gaan on its YouTube channel at 9:00pm.

Cultural organisation Sangskriti has arranged a three day online programme, which commenced on Friday. The programme is being streamed on its Facebook page at 9:00pm daily.

Besides, Indira Gandhi Cultural Centre, High Commission of India, will stream an online programme on its Facebook page at 7:30pm on Sunday.

Rabindranath, who was awarded the Nobel Prize for Literature in 1913, was born on the 25th of Baishakh in 1268 Bengali year at Jorasanko in Kolkata.

Nobody had influenced the minds of so many Bengali-speaking people before or after him. His popularity, which was gradual and steady, has been compared by many to Shakespeare in the English-speaking world.

The youngest of thirteen surviving children, Tagore, nicknamed Rabi, was born on 25th of Bengali month of Baishakh in 1268 (May 7, 1861) in Jorasanko Mansion in Kolkata to Debendranath Tagore and Sarada Devi.

Gitanjali (song offerings), Gora (fair-faced) and Ghare-Baire (the home and the world) are his best-known works and his verse, short stories and essays had a universal appeal as their lyricism and naturalism revealed a contemplative mind.

The author of our national anthem, for his profoundly sensitive verses in Gitanjali, Rabindranath became the first non-European to win the Nobel Prize in literature.

Tagore’s songs were viewed as both spiritual and mercurial.

His compositions dedicated to the people of the region were chosen by two nations as their national anthem: Bangladesh’s Amar Sonar Bangla and India’s Jana Gana Mana. The Sri Lankan national anthem was also inspired by his work.

The legendary poet breathed his last at his paternal residence in Kolkata on Sraban 22 of Bangla year 1348 (August 7, 1941).