Over 200 injured in Al-Aqsa clashes 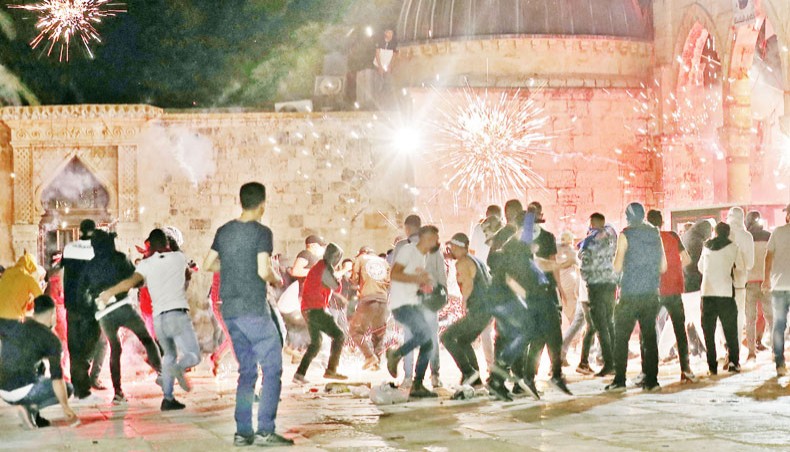 Stun grenades burst in the air amid clashes between Palestinian protesters and Israeli security forces at the al-Aqsa mosque compound in Jerusalem, on Friday night. — AFP photo

Israel braced for more protests Saturday after clashes at Jerusalem’s flashpoint Al-Aqsa Mosque compound wounded more than 200 people and as the US, EU and regional powers urged calm after days of escalating violence.

Israeli police said 17 officers were wounded while the Palestinian Red Crescent reported that 205 Palestinians were injured in the violence at Al-Aqsa and across annexed east Jerusalem.

Video footage showed Israeli forces storming the mosque’s sprawling plaza and firing sound grenades inside the building, where throngs of worshippers including women and children were praying on the last Friday of the Muslim holy month of Ramadan.

The clashes came after tensions soared in recent weeks, over Israeli restrictions on access to parts of the Old City during Ramadan and the threat of eviction hanging over four Palestinian families in east Jerusalem to make way for Jewish settlers.

A call for demonstrations Saturday in solidarity with Jerusalem Palestinians came from an advocacy group for Arab Israelis, who make up 20 per cent of the country’s population, the High Follow up Committee for the Arabs in Israel.

The United States — a staunch Israeli ally whose tone has however toughened under US president Joe Biden — said it was ‘extremely concerned’ by the events and urged both sides to ‘avoid steps that exacerbate tensions or take us farther away from peace’.

The European Union called on the authorities ‘to act urgently to de-escalate the current tensions in Jerusalem,’ saying ‘violence and incitement are unacceptable and the perpetrators on all sides must be held accountable’.

Palestinian president Mahmud Abbas said he held the Israeli government ‘responsible’ for the unrest and voiced ‘full support for our heroes in Al-Aqsa’.

Jordan condemned Israel’s ‘barbaric attack’ in Jerusalem, calling on the international community to stop the ‘escalation and violations’ at Al-Aqsa Mosque.

The unrest came as Iran and it allies around the world on Friday marked Al-Quds (Jerusalem) Day, an annual show of solidarity with the Palestinians.

Iran called on the United Nations to condemn the Israeli police actions, arguing that ‘this war crime once again proved to the world the criminal nature of the illegitimate Zionist regime’.

The Al-Aqsa mosque compund has an explosive history. In 2000, the second Palestinian intifada broke out after then Israeli opposition leader Ariel Sharon made a high-profile visit that Palestinians viewed as an intolerable provocation.

The Al-Aqsa confrontation followed a week of intensifying violence in east Jerusalem and the occupied West Bank.

Earlier Friday, Israeli police said officers killed two Palestinians and wounded a third after the three men opened fire on the Salem base in the occupied West Bank.

On Thursday, Israelis buried Yehuda Guetta, 19, who had been shot on Sunday at a bus stop in the northern West Bank.

Israeli security forces said they had arrested Montasser Shalabi, 44, near Ramallah, on suspicion of carrying out the attack.

Clashes have also repeatedly broken out in east Jerusalem’s Sheikh Jarrah neighbourhood, fuelled by a years-long land dispute between Palestinian residents and Jewish settlers seeking to evict them.

An Israeli court this year ruled that four Palestinian homes there legally belong to Jewish families, who claimed to have lost the land during the war that accompanied Israel’s creation in 1948.

The Sheikh Jarrah families have provided evidence that their homes were acquired from Jordanian authorities, who controlled east Jerusalem from 1948 to 1967.

In Jordan — home to a large Palestinian population — hundreds rallied Friday, chanting ‘we will die for Sheikh Jarrah’.

Israel’s Supreme Court is to hold a new hearing in the case on Monday, when Israelis mark Jerusalem Day to celebrate the ‘liberation’ of the city, including with a parade of Israeli flags through the Old City.