Quad, China and order of the sea 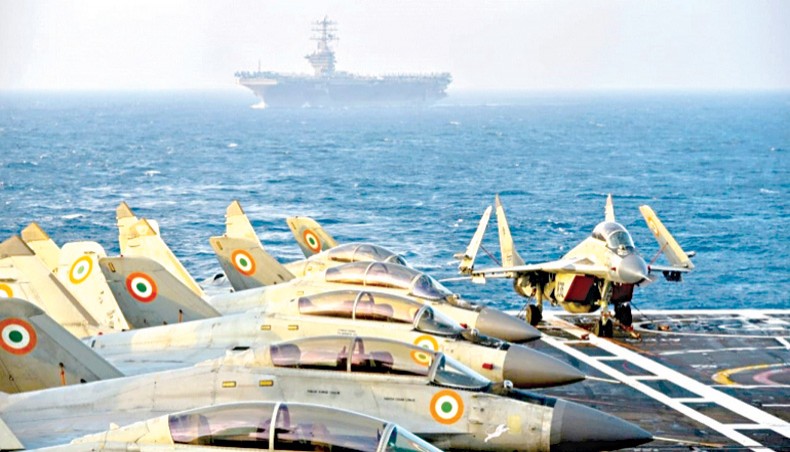 The handout photo shows Indian army fighter jets on the deck of an aircraft carrier during the second phase of the Malabar naval exercise in the Arabian sea. — Al Jazeera/Agence France-Presse/Indian Navy

THE Quadrilateral Security Dialogue, known as the Quad, led by the United States was a Japanese initiative in 2007 to from an informal strategic consultative platform between the United States, Australia, Japan and India. After a decade of inactivity, the Quad was revived after 2017 under the Trump administration again at Japan’s initiative. Quad had its ‘first-ever leader-level summit’ on March 12, 2021 with a focus on collective efforts to fight the Covid pandemic.

After the summit, Quad leaders issued a joint statement — The Spirit of the Quad. The statement, in addition to the focus on fighting the pandemic, pledged ‘to strengthen our cooperation on the defining challenges … promoting a free, open rules-based order, rooted in international law to advance security and prosperity and counter threats to both in the Indo-Pacific and beyond.’ Committed to supporting the ‘freedom of navigation and overflight, peaceful resolution of disputes, democratic values, and territorial integrity.’ The Quad is yet to endorse its charter and take a formal shape.

The security dialogue was paralleled by the joint naval exercise Malabar which began as a bilateral naval drill between the United States and India in 1992, suspended after India’s nuclear test in 1998 and resumed after 9/11 when India joined the United States’ ‘global war on terror.’

Exercise Malabar is not mandated by the Quad. It has been a regular annual naval event of the countries that are also members of the Quad. Japan joined the naval exercise in 2007, the year Quad was formed. The United States, Japan and India have been regular participants since 2007. Australia participated in 2007 and 2020. Exercise Malabar is a multilateral naval drill outside the Quad mandate although the media often report it as ‘Quad Naval Drill or Exercise.’ The exercise was conducted in the waters abutting the Indian and the Pacific Ocean like the Bay of Bengal, the Philippine Sea, the Sea of Japan, the Arabian Sea etc except the South China Sea and the East China Sea.

The Quad, formed from a humanitarian perspective after the tsunami in 2004 though, ‘has provided the US and its allies with an ideal multinational framework to generally suppress China in the future”, said Shi Yinhong, a professor of international relations with Renmin University. China’s economic and military advances overlaps Quad countries’ common interests like ‘the freedom of the seas, the shape of regional diplomatic architecture….’ The Quad’s shared interests of ‘the freedom of the seas’ is challenged by China’s claims of more than 80 per cent of the South China Sea and PLAN’s growing presence from the Pacific into the Indian Ocean.

‘The regional diplomatic architecture’ is taking a new shape with China’s Belt and Road Initiative and diplomatic successes in the South Pacific where countries are establishing diplomatic ties with China severing relations with Taiwan. China, given its economic and military outreach, has emerged a strategic factor in the regional security environment.

China is opposed to the Quad. China warned that the ‘Quad grouping would severely undermine regional security’ and ‘military operations should be conducive to peace and stability in the region, not contradictory.’ It issued diplomatic protest notes to each member state at its formation from the understanding that the naval powers are ganging up against China to undermine its interests. Political challenges from either side has brought in heightened naval diplomacy at play to support respective political resolve. While naval diplomacy is getting more contested over the expanded horizon, the Quad predicts a potential expansion with the New Zealand, South Korea and Vietnam which China views as a drive to encircle it geographically.

According to Qian Yong, an associate professor of Zhejiang University’s Korea Institute, ‘The US has been wooing South Korea and seeking to integrate the US’ alliances, respectively with Japan and South Korea, into a triangular alliance. If South Korea joins the Quad, chances are it will eventually lead to such a trio — in other words, a little NATO in Northeast Asia, which will certainly pose a serious challenge to China’s security.’ Bi Yingda, a research fellow with the Institute for Korean Peninsula Studies at Shandong University, said, ‘An anti-China multilateral alliance in East Asia would heighten confrontation in the region. Subsequently, Beijing would move closer to Russia and side with North Korea over the peninsula issues.’

To fend off any probable geographical encirclement, China, besides potential alignment with Russia and North Korea, may push ahead the BRI at a quicker pace along with reviving the ‘pearls in the string’ from the Pacific to the Indian Ocean.

China’s strategic backyard Myanmar’s naval expansion is seemingly aimed at playing as China’s proxy in the Bay of Bengal and the Andaman Sea. China is modernising Cambodia’s Ream naval base with the scope to access base facilities for its naval ships. China’s presence in Sri Lanka is an irritation, if not headache, for India. Pakistan, the trusted ally of China in South Asia, is no more viewed as India’s walkover. Chinese military base in Djibouti has been readied to receive its aircraft carrier.

If ‘enemy’s enemy is my friend’, then Iran could possibly secure the backing of China. A joint naval exercise between China, Iran, and Russia held in the Indian Ocean and the Sea of Oman in December 27–29, 2019 in the face of escalating tension between the United States and Iran could signal growing politico-military relations between China and Iran. China described the exercise as ‘to deepen exchange and cooperation among the navies of the three countries, and display their strong will and capability to jointly maintain world peace and maritime security, while actively building a maritime community with a shared future.’

Sea has been the source of common good for a shared future. But no country alone could ensure the order of the sea for common benefits. Collective efforts are vital. Collective efforts throughout the history at times turned into collective competition making the order the sea choppy. The present Quad-centric strategic alignments between maritime powers appear set to repeat the history.

Mohammad Abdur Razzak is a retired commodore of the Bangladesh navy.