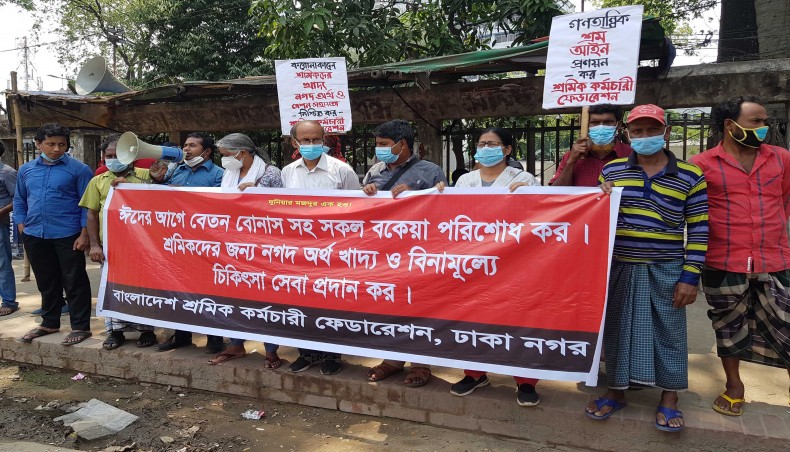 Leaders of different labour organisations on Friday at separate statements called on the government to take initiatives to pay wage and festival allowance of the workers before May 10.

Leaders of Bangladesh Sramik Karmachari Federation held a rally in front of the National Press Club where its Dhaka city unit president Raju Ahmed was in the chair.

Vice-president of the organisation Manas Nandi said that, in most of the mills and factories, the owners deprived the workers of their wage and allowances.

He called on the government to monitor the factories and take action against the owners of the industries where workers are deprived.

Garments Sramik Karmachari Oikya Parishad joint coordinators Abdul Wahed and Quamrul Ahsan in a press statement called on the garment factory owners to pay wage and festival allowance to the workers before May 10.

The workers would not be able to celebrate Eid-ul-Fitr with their families without allowance, they argued.

Socialist Labour Front president Razequzzaman Ratan and general secretary Ahsan Habib Bulbul in a press statement demanded wage and festival allowance for the workers of the informal sector before Eid.

SLF will hold a protest rally in front of the National Press Club on May 10 to press the demands of the workers, they said.