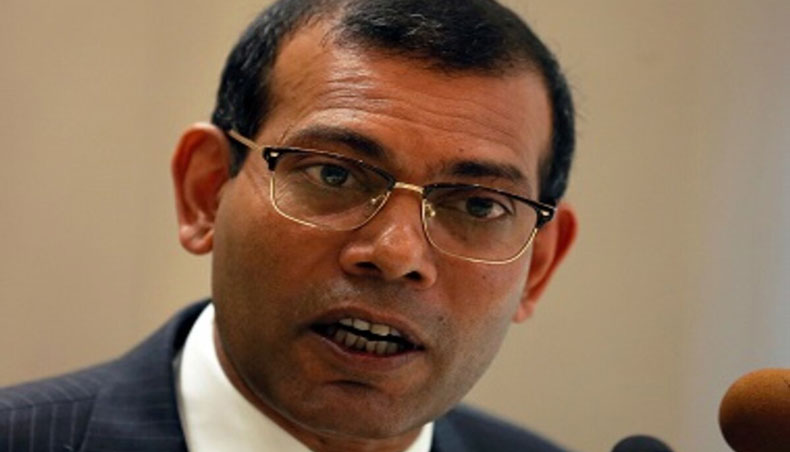 Nasheed, 53, the Maldives’ first democratically elected president and still an important figure in the island nation’s murky politics, was rushed to hospital after an explosion late Thursday.

Since then he has undergone 16 hours of life-saving operations in the capital Male for injuries to his head, chest, abdomen and limbs.

The private ADK hospital said Friday evening that Nasheed was ‘in a critical condition in intensive care’.

In a televised address to the nation, president Ibrahim Mohamed Solih announced that a team from the Australian Federal Police would arrive Saturday to help with the investigation into the blast.

Solih described the attack as an assault on the fledgling democracy, promising the perpetrators ‘would face the full force of the law’.

Police said officials from the United Nations Office on Drugs and Crime have also been asked to assist in the investigation.

Maldivian police said they were treating Thursday’s bomb attack as a ‘deliberate act of terror’ and urged the public to provide any information that could identify the perpetrators.

Police said a device attached to a motorcycle was detonated as Nasheed got into a car in the capital.

The hospital said earlier that shrapnel had been removed from one of his lungs and from his liver but that another piece was still in the same organ.

‘We are hopeful of a full recovery,’ said a family member who did not want to be named, adding that Nasheed was responsive and spoke with doctors when he was admitted.

One of his bodyguards as well as a British national were also wounded and taken to hospital.

The Indian Ocean nation of 340,000 Sunni Muslims is best known for its luxury holiday resorts popular with honeymooners, but it suffers from regular political turmoil.

There was no claim of responsibility for Thursday’s bomb attack, but officials close to Nasheed’s Maldivian Democratic Party said they suspected vested political interests opposed to his anti-corruption drive.

Nasheed had vowed to investigate a $90-million theft from the state’s tourism promotion authority during the tenure of former president Abdulla Yameen.

‘There are some dormant Islamists who could have collaborated with political elements threatened by Nasheed’s anti-corruption drive,’ an MDP source told AFP.

The government has cracked down on extremism and foreign preachers are banned.

Violent attacks have been rare, though a dozen foreign tourists were wounded by a bomb blast in Male in 2007.

The Islamic State claimed a boat arson attack last year, but there is little evidence the group has a presence in the archipelago.

Nasheed, a liberal, is maybe best known internationally for holding a 2009 underwater cabinet meeting to highlight the threat of global warming, signing documents as officials wore scuba gear against a backdrop of coral reefs.

He was toppled in a military-backed coup in February 2012, convicted on a charge of terrorism and jailed for 13 years.

He left the country on prison leave for medical treatment and sought refuge in Britain.

He returned after his nominee Solih won the presidency in 2018, winning parliamentary elections the next year to become speaker.

Messages of support for Nasheed poured in on Friday from neighbouring India, Pakistan and Sri Lanka as well as Western nations, which have strongly backed his pro-democracy and environmental activism.