UK votes as independence debate heats up in Scotland 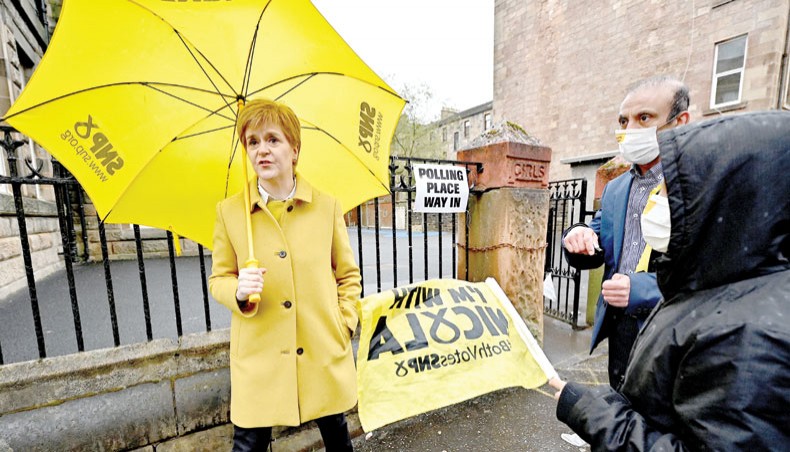 Scotland’s First Minister and leader of the Scottish National Party (SNP), Nicola Sturgeon gestures as she meets voters at Annette Street school polling station in Glasgow, Scotland on Thursday, as voters go to the polls for the Scottish Parliament election. — AFP photo

Voters went to the polls for ‘Super Thursday’ elections that could reshape the UK as pro-independence forces in Scotland bid to break away, in the first major electoral test since Brexit and the coronavirus crisis.

The regional and local elections will test backing for prime minister Boris Johnson’s Conservatives after he led Britain out of the EU and through the pandemic, overseeing Europe’s highest death toll but also its fastest vaccine rollout.

Johnson, who has shrugged off recent scandals, urged high turnout for ‘a very big day at the polls’.

‘It’s the Conservatives who are delivering on your priorities, better taxpayer value, other parties (are) just playing political games,’ he said in a Twitter video clip.

Any ‘vaccine bounce’ for the Conservatives in key English races would fuel criticism of Keir Starmer, leader of the main opposition Labour party, ahead of the next general election due in 2024.

The Conservatives were hoping to spring an electoral surprise by grabbing the UK parliamentary seat of Hartlepool, in a special election deep in Labour’s once-impregnable heartland of northeast England.

The Hartlepool result is due in the early hours of Friday, and the other outcomes will take shape over the weekend. Social distancing rules for ballot counters are expected to slow down the process.

Voting was also underway for local councils in England, regional mayors including in London, and for the devolved assemblies in Wales and Scotland.

Results for the Edinburgh parliament are expected on Saturday evening, with the Scottish National Party seeking a pro-independence majority to put pressure on Johnson to permit another referendum on splitting from the UK.

Johnson has said Scotland’s 2014 referendum, when 55 per cent of people voted ‘no’ to independence, closed the debate for a generation.

‘This is not the time to have a reckless and I think, irresponsible, referendum,’ he said, pushing back against SNP leader and Scottish First Minister Nicola Sturgeon, who wants another vote once the pandemic subsides.

In Glasgow, 60-year-old cleaner Lorna McClure said she was ‘all for Nicola Sturgeon’.

‘I think she is really good for Scotland and I want independence,’ she said.

But Raghav Jay, a 35-year-old business student said: ‘I think I would rather Scotland stayed within the UK. So I’d prefer a party which is going to support that.’

Latest opinion polls suggest the SNP will gain a slim majority for the first time since 2011, keeping it in power, although other surveys have indicated a coalition is likely.

Most Scots rejected Brexit in the UK’s 2016 referendum on leaving the European Union, which has boosted independence sentiment, although fears of fresh economic upheaval after the pandemic are bolstering support for staying in the UK.

‘We need strength in unity and to start having new borders... would be madness,’ said Alec Telfer, 64, president of the Blackface Sheep Breeders Association.

The outcome in England will be watched closely to see whether Johnson’s party manages to hold on to gains in the 2019 general election and previous local votes after the Brexit referendum.

Starmer replaced the hard-left Jeremy Corbyn as Labour leader just over a year ago, and has been trying to rebuild support in the ‘Red Wall’ of northern England that was breached by the Tories in the previous votes.

He has recently sharpened attacks on Johnson’s personal integrity, with the prime minister refusing to answer questions over who initially paid for costly renovations to his Downing Street flat.

Multiple investigations are underway into the affair, but Johnson has deflected the ‘wallpaper-gate’ scandal as Westminster gossip.

His argument will be significantly boosted by any Conservative inroads in Hartlepool, in two mayoral races for the English regions of Tees Valley and the West Midlands, and in council elections elsewhere in the north of England.

Starmer has played down expectations for Labour, stressing ‘I never thought we would climb the mountain we have to climb in just one year’, after the party under Corbyn suffered its worst election drubbing since 1935.

‘We’ve got to rebuild into the next general election — that is the task in hand,’ the centre-left leader said.