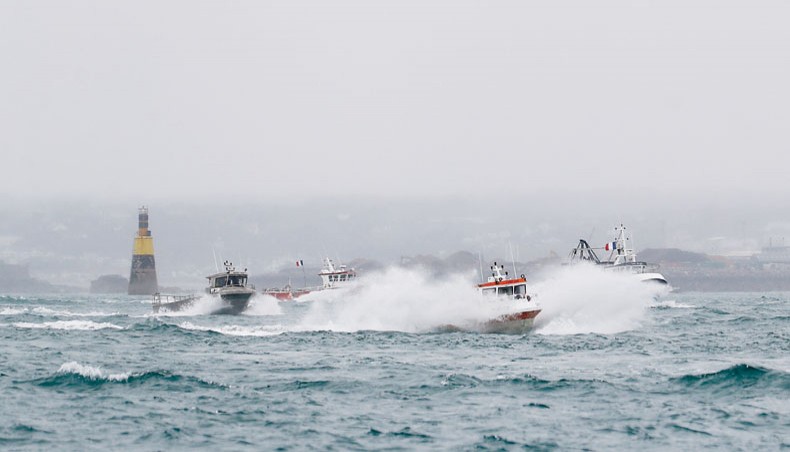 French fishing boats leave the Jersey waters following their protest in front of the port of Saint Helier off the British island of Jersey to draw attention to what they see as unfair restrictions on their ability to fish in UK waters after Brexit, on Thursday. — AFP photo

Roughly 50 French fishing boats that converged on the Channel island of Jersey on Thursday to protest against new rules on access to its waters have begun to head home, one of the fishermen said.

Jersey officials ‘are sticking to their positions,’ said Ludovic Lazaro, based at the nearby French port of Granville, after his colleagues met with local authorities.

‘Now it’s down to the ministers to find an agreement. We are not going to be able to do much,’ he said.

Dimitri Rogoff, president of the Normandy fishing committee, said that ‘the show of force is over, now it’s politics that has to pick up the baton.’ He called on French government officials to carry out if necessary reprisals over what fishermen say are more onerous terms for securing licenses to fish in British territorial waters.

Maritime minister Annick Girardin escalated tensions on Tuesday by warning that France could cut electricity supplies to Jersey in retaliation, a threat condemned by the British government as ‘unacceptable.’

‘Fishermen shouldn’t be the ones blockading Jersey to get what they want,’ Rogoff said. ‘If we don’t obtain our goals, the minister needs to turn off the lights.’