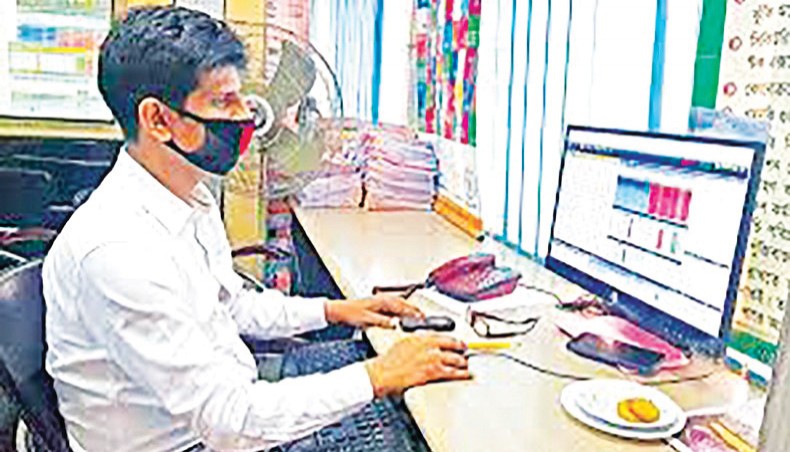 A file photo shows a person monitoring share price movements on a monitor at a brokerage house in the capital. Dhaka stocks increased for the third day on Thursday with the key index hitting a three-month high as investors continued buying shares amid the relaxation of Covid restrictions by the government. — New Age photo

Dhaka stocks increased for the third day on Thursday with the key index hitting a three-month high as investors continued buying shares amid the relaxation of Covid restrictions by the government.

Thursday’s index was the highest after February 4 when it was at 5,647.67 points.

The DSEX gained 95 points in the last three sessions.

The government on Monday extended the Covid restriction period to May 16 but allowed public transports to operate inside cities and districts beginning on Thursday.

Transactions on bank and stock exchanges were also extended by one hour.

The investors’ concern over the fresh wave of the Covid outbreak has lessened as the infection and death rates have declined in recent days, market operators said.

EBL Securities in its daily market commentary said, ‘Investors are viewing the stock market as a better investment option as their confidence in the bourse is restored based on the satisfactory earning declarations amidst decreasing cases of Covid infection in the country.’

‘The investors’ heightened participation has uplifted the market amid extended trading time while today’s [Thursday] turnover reached the highest in the past three months,’ it said.

Among the large capitalised companies, share prices of Renata, BRAC Bank, IFIC Bank, British American Tobacco and Orion Pharmaceuticals advanced on Thursday that contributed most to the gain.

Share prices of Orion Pharmaceuticals continued gaining as the media reported that the company had initiated a move to manufacture the Russian Covid vaccines in the country.

Average share prices of textile, engineering, pharmaceutical and bank sectors advanced by 2.4 per cent, 1.6 per cent, 0.6 per cent and 0.58 per cent respectively.

Market operators said that many companies had reported better financial growth during the third quarter (January-March) despite the coronavirus fallout, which had raised the investors’ confidence.

Many investors went for profit taking share sales after their recent gains. The market has gained 441 points in the last 18 trading sessions with just three negative sessions.

Average share prices of life insurance, general insurance and non-bank financial institution dropped by 2.6 per cent, 2.2 per cent and 0.6 per cent respectively.

BEXIMCO led the turnover chart with shares worth Tk 107.06 crore changing hands on the day.