Three runners vie for one wildcard 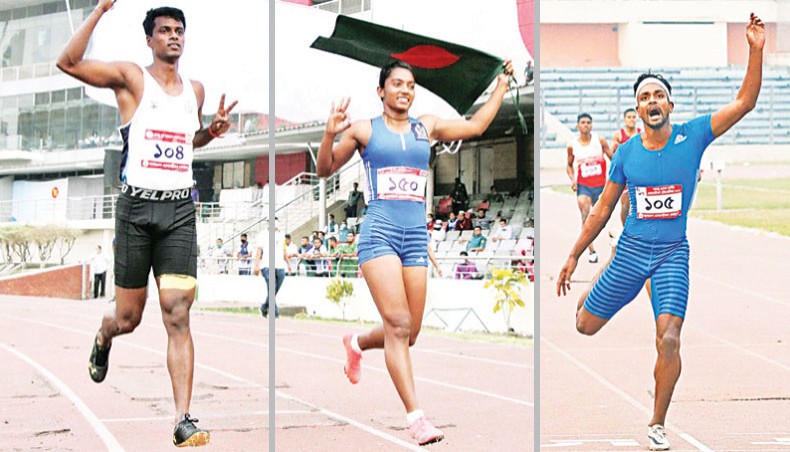 Runners Mohammad Ismail, Shirin Akter and Jahir Rayhan are vying for one wildcard to represent Bangladesh in the upcoming Tokyo Olympics.

A total of three athletes from Bangladesh, archer Ruman Shana, swimmers Junaina Ahmed and Ariful Islam, have so far confirmed their participation in the mega event.

While Shana qualified directly for the Olympics, Junaina and Ariful confirmed their berth in the greatest sporting spectacle as a wildcard.

But unlike swimming, Bangladesh will get only one wildcard in sprinting, which is due to the pandemic, according to Bangladesh Athletics Federation general secretary Abdur Rakib Montu.

‘Due to Covid-19 situation, this time we will get one wild card. Three athletes –Shirin, Ismail and Jahir – are on the shortlist. They were listed around a year back by the World Athletic Federation on the basis of their performances at the international stage,’ Montu told New Age Thursday.

Montu also informed that International Olympics Committee is likely to select who will get the wildcard, if not; the BAF will take the decision.

All three sprinters are from the Navy, with Ismail and Shirin Akhter being the current fastest man and woman in Bangladesh in the 100-metre sprint, Jahir Rayhan is one of the country’s leading 400-metre runner.

Out of the three in contention, Shirin is the only one with experience of competing in the Olympics, as she represented Bangladesh alongside Mesbah Ahmed in the 2016 Rio Olympics, where they competed in the women’s and men’s 100m sprint respectively.

Shirin, who clocked 11.60 seconds in the 9th Bangabandhu Bangladesh Games to become the fastest woman in the country for the 12th consecutive time, clocked 12.96 seconds in the Rio Olympics and finished fifth in the preliminary heat among eight sprinters.

‘My target will be to improve my timing. I did 12.96 seconds in Rio Olympics and clocked 11.99 seconds in the 2016 SA Games in India. I am continuing my training to do better if I get the chance again,’ Shirin said.

No sprinter from Bangladesh has ever competed in the final round of the event, something Shirin aspires to do.

‘If get chance through wildcard, the main target will be advancing into the final round from preliminary heat,’ she added.

Ismail, who won gold in the Bangabandhu Bangladesh Games with a timing of 10.50 seconds, is also hoping to clear the preliminary hurdle if he gets the wildcard.

Jahir could not take part in Bangabandhu Bangladesh Games as he was infected with the Covid-19 virus during the Games, but has set himself the same target of surviving the preliminary round if he is chosen for the wildcard.

‘It may not be possible to win gold. But I will try my best to do better if get a chance in the Olympics. I will try not to get eliminated from heat and advance into the final round,’ Jahir said.

In the 400m race, Jahir clocked his best electronic timing, 47.34, seconds in an invitational championship in India and clocked 46.86 seconds in the National Championship, both of which happened in 2019.