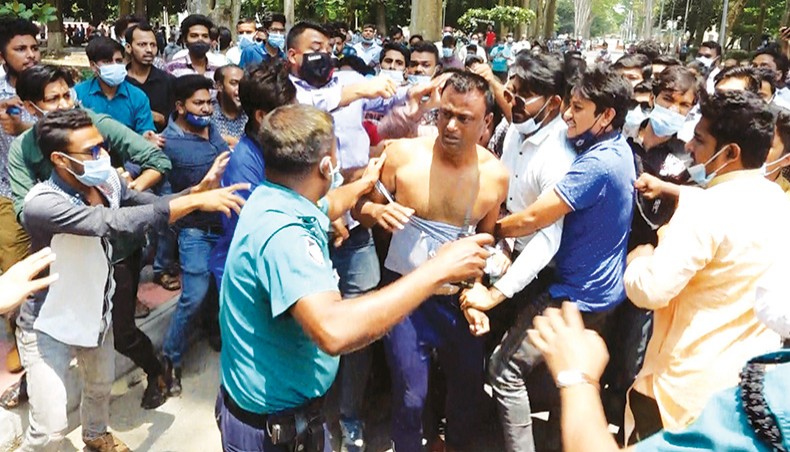 A police officer tries to restrain Bangladesh Chhatra League activists during a clash between the organisation’s Rajshahi University branch and city branch activists on the campus on Thursday. — Star Mail photo

Tension developed among a section of teachers as Sobhan, to execute his plan for these appointments, released the university registrar Professor Abdus Salam from his post on Thursday.

Salam had refused to give signatures on appointment letters following the education ministry’s order.

Sobhan, however, gave appointments to candidates of his choice appointing assistant registrar Mamun-ur-Rashid as acting registrar and after assuming the new position, Mamun gave his signature to all the appointment letters, RU teachers and officials said.

They said that Sobhan left his residence at about 2:30pm with police protection after the appointments were confirmed.

Outgoing VC Abdus Sobhan could not be reached for comments despite repeated attempts over the phone.

When contacted, former registrar Abdus Salam told New Age that the VC called him on Wednesday morning and said that he was sending a car so that he could come to the office.

‘Later, I came to know that my signature was needed on the appointment letters, and then I switched off my mobile phone,’ he added.

Abdus Salam said that he knew nothing about his replacement.

Meanwhile, leaders and activists of Bangladesh Chhatra League Rajshahi Metropolitan and RU units locked in a clash in front of the vice-chancellor’s residence after the news of the appointments spread.

Later, police charged batons on the BCL activists and leaders to control the situation.

Kamruzzaman Chanchal, assistant director of the physical education and sports science department and Abdullah al-Masud, section officer of Habibur Hall, were injured among five others in the incident.

RU proctor Professor Lutfor Rahman also could not be reached for his comments.

By giving appointments to a huge number of people, the VC has demonstrated that he has no respect for the government, they said.