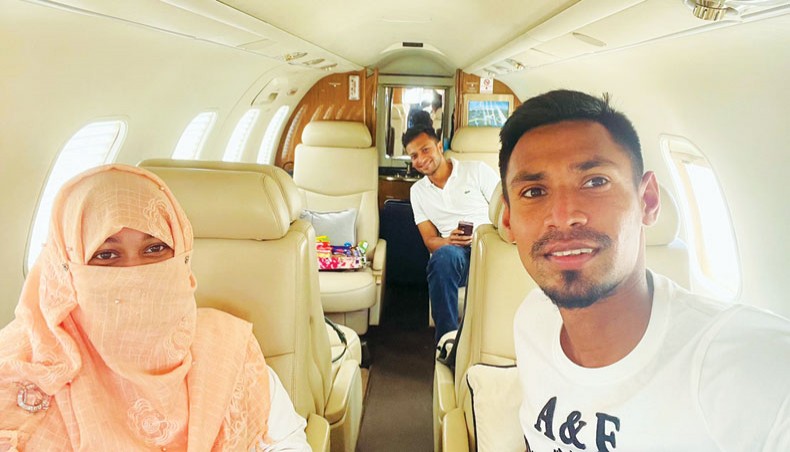 Bangladesh pacer Mustafizur Rahman, his wife Samia and all-rounder Shakib Al Hasan are seen inside a chartered flight during their returning home from India on Thursday. — Twitter photo

Cricketers Shakib Al Hasan and Mustafizur Rahman, who were stranded in India after the 2021 edition of the Indian Premier League got halted due to Covid-19 positive cases in multiple franchises, have returned to Bangladesh on Thursday in a chartered flight, confirmed airport officials.

Additional superintendent of police Alamgir Hossain, who is posted in the Airport Armed Police Battalion, told New Age that Mustafiz, his wife Samia and Shakib arrived in Bangladesh on a chartered flight from India.

‘Shakib Al Hasan, Mustafizur Rahman and his wife Samia; all arrived in Bangladesh in a chartered flight from Ahmedabad at around 1600 hours. They were sent for institutional quarantine. Shakib will stay at the Doreen Hotel and Resorts [formerly known as Four points by Sheraton] in Gulshan and Mustafiz will stay at the Pan Pacific Sonargaon hotel with his wife,’ Alamgir said.

Due to escalating numbers of Covid-19 cases in India, Bangladesh and several other countries have closed commercial flights with the country.

As per the government imposed regulations in Bangladesh, any traveller from India would have to undergo 14 days of institutional quarantine after arrival.

Bangladesh Cricket Board had submitted a plea to the Directorate General of Health Services to lessen the quarantine period but the DG rejected the plea.

Both cricketers will now miss out on the majority of the national team’s training ahead of the series against Sri Lanka as their quarantine will end on May 20, just three days before the first one-day international.

Shakib skipped the Test series against Sri Lanka to play in the IPL for Kolkata Knight Riders, claiming that it would help him prepare for the upcoming Twenty20 World Cup, which is scheduled to take place in India later this year.

Mustafiz was overlooked by the selectors for the Test side as he was not doing well with the red-ball though the pacer had said that he would prefer to play for the country.

Shakib had a below-par season with the KKR team this season as he was dropped from the playing XI after the first three matches, where he could hardly display his abilities.

Mustafiz was a regular starter for his side Rajasthan Royals and played seven matches where he picked eight wickets.