NGOs call on UN to impose Myanmar with arms embargo 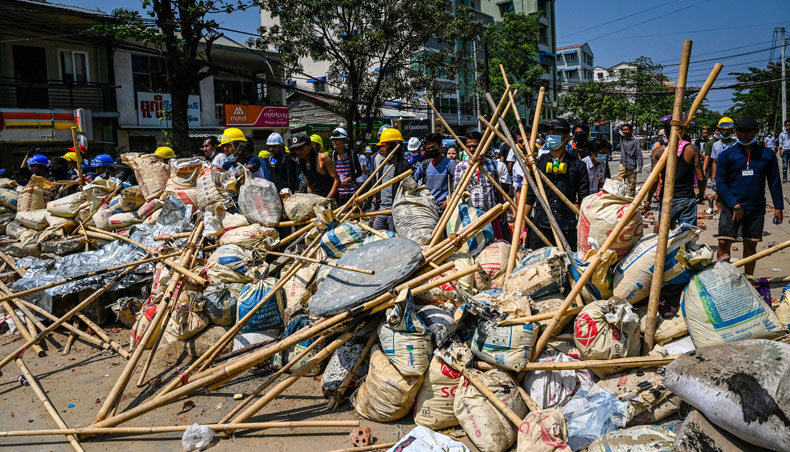 In this file photo taken on March 19, 2021, protesters take cover behind makeshift barricades during a demonstration against the military coup in Yangon’s Thaketa township. — AFP photo

About 200 non-governmental organisations, including Amnesty International and Human Rights Watch, on Wednesday called on the UN Security Council to impose an arms embargo on the military junta in Myanmar.

The call comes despite opposition from China — the junta’s main backer — and Russia, which both hold veto-wielding power on the Council, to any sanctions amid the months-long crisis in the former Burma.

‘No government should sell a single bullet to the junta,’ which seized power on February 1 in a coup, the NGOs said in a joint statement, adding, ‘Imposing a global arms embargo on Myanmar is the minimum necessary step the Security Council should take in response to the military’s escalating violence.’

Since the junta took power, ousting the civilian government of Aung San Suu Kyi, several groups have called in vain for an arms embargo.

On Monday, China’s envoy to the United Nations, Zhang Jun, again told reporters that diplomacy was the way forward, and that efforts by regional grouping ASEAN, to which Myanmar belongs, to find a solution should be supported.

‘We are not in favor of imposing sanctions,’ Zhang said.

For Amnesty’s Lawrence Moss, ‘mere condemnation by the international community has had no effect.’

‘It is time for the UN Security Council to use its unique powers to impose a comprehensive global arms embargo in order to try and end the military’s killing spree,’ Moss said in a statement.

In a separate statement, Human Rights Watch’s Louis Charbonneau said that the fact the Council has not even debated an embargo is ‘an appalling abdication of its responsibilities toward the people of Myanmar.’

‘The council’s occasional statements of concern in the face of the military’s violent repression of largely peaceful protesters is the diplomatic equivalent of shrugging their shoulders and walking away,’ Charbonneau added.

Since February 1, the Security Council has unanimously adopted four statements on Myanmar, but each time, they have been watered down in negotiations, notably by Beijing.

In the UN General Assembly, a draft resolution proposed by Liechtenstein — with the backing of the European Union, Britain, the United States, Canada and Turkey, among others — has been under discussion for several weeks.

According to the first version of the text, obtained by AFP, the resolution — which would be non-binding, as opposed to Council resolutions — calls for an ‘immediate suspension’ of direct and indirect supplies of arms and munitions to Myanmar.

It also calls ‘on the Myanmar armed forces to immediately stop all violence’ against civilians. So far, more than 750 people have been killed in the unrest.