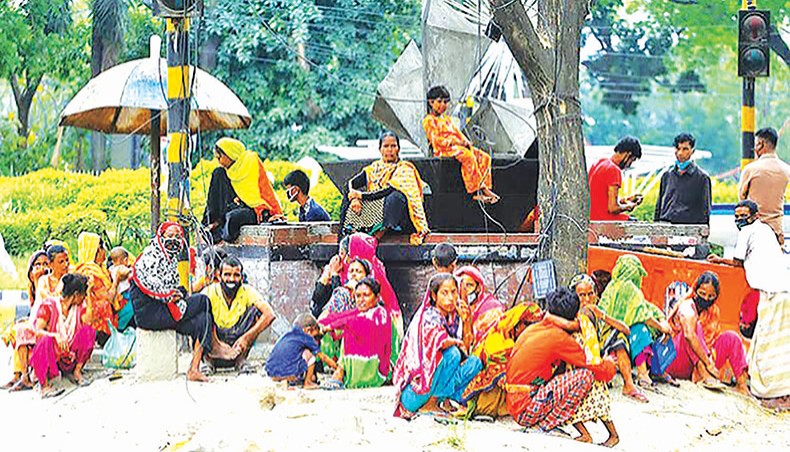 A file photo shows relief-seekers waiting on a street island near the National Press Club in Dhaka in 2020 as the Covid-19 outbreak pushed the poor to streets to receive food from donors. Income inequality worsened in the country as the share of the bottom half of the population in household income dropped amid the Covid-19 outbreak, according to a household survey report. — New Age photo

Income inequality worsened in the country as the share of the bottom half of the population in household income dropped amid the Covid-19 outbreak, according to a household survey report.

Average income of individuals also declined and a significant number of people were pushed into lower-income groups, indicating a higher poverty incidence in the country.

The findings were revealed at a virtual dialogue on ‘Income and Employment in Covid Times: How the People are Coping’ held on Wednesday.

The CPD and Oxfam in association with Citizen’s Platform for SDGs, Bangladesh organised the dialogue.

CPD senior research fellow Towfiqul Islam Khan presented the key findings of the survey conducted on 2,600 households in 16 districts across the country between late January and early February.

The average income of individuals was also eroded by 11.92 per cent in the period and a significant number of people were pushed into lower-income groups, indicating a higher poverty incidence in the country, he said.

According to the findings of the survey, 61.57 per cent of the employed population lost their jobs at some point (mostly in April and May 2020 when the general holiday or lockdown was in place) due to the COVID-19 outbreak and they could not find jobs for on an average of 95 days.

Around 85 per cent of the employed people in the pre-COVID period who had lost jobs became unemployed for more than one month.

Almost all of these people were able to find a job by JanuaryFebruary 2021, it said.

The higher number of jobs, however, failed to provide an income equal to pre-Covid level or higher incomes as 45 per cent of the households had lower incomes compared with the preCovid period, according to the findings.

Monthly incomes of individuals declined in almost all sectors with the highest 16.50 per cent drop in agriculture, forestry and fishing followed by 13.86 per cent in wholesale and retail trade and 12.75 per cent in manufacturing.

According to the survey, more than 40 per cent of the employed population reported that their employment situation was worse than the pre-Covid-19 period while 86 per cent of the individuals said that they were not earning enough to meet their daily necessities.

‘Although people could find employment, they are working for a lower number of hours, on average, particularly in the agriculture sector followed by the industry sector,’ Towfiq said.

Most of the incremental employment was generated in the agriculture sector, leading to reduced working hours and lower wages while a significant number of people left the service sector, he said.

Employment in the agriculture sector grew by 18.24 per cent followed by 3.86 per cent in the industry sector while 1.54 per cent left the service sector, the survey found.

Working hours across the sectors declined by 4 per cent with the highest 8.11 per cent decline in the agriculture sector as more workers were engaged in the sector that also caused hidden unemployment.

Towfiq said that the trend also indicted that structural transformation on the labour market had gone backwards as formal jobs were substituted by the informal sector.

The decline in incomes also led to lower expenditure by the households as 78 per cent of the surveyed households reported that they had reduced expenditure to cope with the impacts of the Covid-19 outbreak while 52.84 per cent had cut down on food expenditure.

Support from the government was limited as only 20 per cent of the households received some form of government support, he added.

The CPD in its report said that policy responses in view of the employment scenario and the labour market needed to be designed considering immediate, short-term and medium-term ramifications of the pandemic.

There is an urgent need for enhancing cash transfers to the marginalised groups and affected households while the stimulus packages will need to be redesigned in view of the experience of the past year, it said.

More credit at a subsidised rate is required for farmers and low-income people, it added.