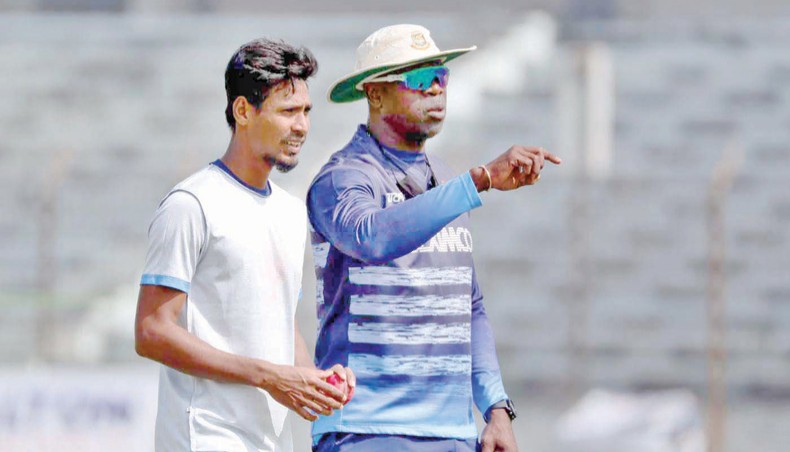 Bangladesh cricket team will be in a half-baked shape when they face Sri Lanka at home in the three-match one-day international series as they are already missing a number of support staff and are at risk of losing a couple of key players due to Covid-19 related travel restrictions.

The team returned from Sri Lanka on Tuesday and the members are now staying in home quarantine but some of the key support staff stayed back in Sri Lanka to travel to their personal destinations.

Former Bangladesh cricketer Shahriar Nafees, who is currently working at the BCB in the cricket operations department and went to Sri Lanka as a touring party member, told New Age that three support staff did not return to Bangladesh from Sri Lanka.

Gibson, the former West Indian pacer who now holds a British Passport, told the media that he will be joining his family in the UK but will still monitor the players throughout the series.

‘I might not be here physically, but I will be attached with every pace bowler. I will be with the team despite being far away. I will watch every ball, see every match,’ Gibson told the media on Wednesday.

The Tigers are also at risk of losing Shakib Al Hasan and Mustafizur Rahman as both cricketers are now stranded in India.

The duo was taking part in the Indian Premier League, which got halted on Tuesday after multiple franchises reported Covid-19 positive cases.

Shakib and Mustafiz will have to go through a lot of hoops to return to Bangladesh as the government has suspended air travel with India and also closed the border with the neighbouring nation due to the worsening Covid situation in India.

Bangladesh Cricket Board applied to the Directorate General of Health Services to curtail the mandatory 14-day institutional quarantine for Shakib and Mustafiz, but DGHS rejected the plea.

On Wednesday, BCB announced the itinerary for the Sri Lanka series, which will commence on May 23, giving Shakib and Mustafiz around two and a half weeks to return, serve the quarantine, train with the team and play the series from the start.

Bangladesh were also missing video analyst Shrinivas Chandrasekaran and spin bowling consultant Daniel Vettori in the recently concluded Sri Lanka tour, as the former was working in the IPL and the latter chose not to come due to Covid-19 related travel restrictions.

Chandrasekaran is likely to miss the forthcoming series too while Vettori’s absence is absolutely certain.

The three-match ODI series, which is part of the ICC ODI Super League, a qualification competition for the 2023 World Cup, will take place in its entirety at the Sher-e-Bangla National Stadium in Mirpur.

The Sri Lanka team will arrive in Bangladesh on May 16 and after three days of quarantine the visitors will start doing outdoor training from May 19.

The only practice match will take place on May 21 at the BKSP.

The matches will take place on May 23, 25 and 28 respectively and all of them will be day-night games.

On May 29, the Sri Lanka cricket team will leave Bangladesh.

Bangladesh is now at sixth position in the Super League points table with 30 points while Sri Lanka is at the bottom of the 12-team competition.