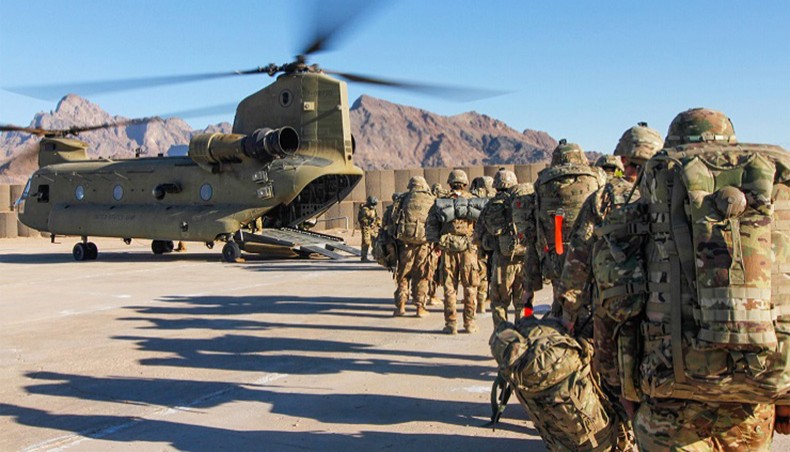 US PRESIDENT Joe Biden solemnly and rather bluntly announced that he would withdraw all American troops from Afghanistan by September 11, the 20th anniversary of the attacks on the World Trade Centre and the Pentagon. More than 3,000 people of different nationalities were killed in these attacks, committed by the terrorist organisation al-Qaeda (banned in Russia), led by Osama bin Laden of Saudi Arabia and created with the active assistance of the United States. In response, Washington found nothing better to pursue than to launch yet another global war: the ‘war on terror,’ which is essentially an undeclared war between state and non-state actors, bearing with it an even greater wave of terrorism.

September 11, 2001 was, in a manner of speaking, a turning point in human history. The decision by Washington, soon followed by the North Atlantic Treaty Organisation, to invade Afghanistan, where the US-founded al-Qaeda was based, triggered an era of renewed wars and the emergence of powerful new organisations, such as Daesh (banned in Russia), which was also created with the assistance of the United States. For nearly two decades, Afghanistan and then Iraq, which the George W Bush administration also decided to invade, were the main determinants of the political prospects of subsequent US presidents. The Obama administration felt that the war in Iraq was not in its interests and that the United States should focus entirely on Afghanistan, where a powerful new wave of terrorism has emerged, but after examining various opinions, officials in Washington decided it was best to pull back. The Trump administration also promised to leave, but at the same time entered into peace talks with the Taliban (banned in Russia). The ill-conceived, hastily drafted American agreement was supposed to pave the way for peace talks between the Taliban and the elected Afghan government, but so far it has yielded no meaningful results.

And even these miserable negotiations failed because the Taliban continued to insist that they were the legitimate rulers of Afghanistan. American troops drove them out of Kabul, but then they rallied and proceeded to ‘liberate’ nearly half the country. Nevertheless, the Taliban forced the Joe Biden administration to abandon the option of further negotiations in favour of fleeing Afghanistan, which boldly defied the United States, as it had once done against the United Kingdom.

The flight of US troops from Afghanistan will quite obviously weaken Kabul considerably. This would tilt the balance of power against it and in favour of its various opponents, endangering the development of a modern Afghan civil state, which has recently faced a greater likelihood of increased violence, terrorism, and deterioration of minority rights through the fault of the United States. But it is in the international arena where the biggest changes will take place. The disgraceful US flight from Afghanistan will become another milestone, among other failures in the Middle East, in the decline of American influence, power and status. Now this region can safely say: Goodbye, America!

Some conclusions can now be drawn from the US’s ‘Afghan arc’. For example, Joe Biden’s speech was pompously titled ‘The way forward in Afghanistan,’ in which he said the mission was accomplished, mentioning the elimination of al-Qaeda’s leader Osama bin Laden in May 2011. But, in his own words, since 2011 the reasons for the continued presence of US troops in Afghanistan have become ‘unclear’. For more than 10 years, the US occupied the country, wreaking death and destruction in various regions, while Osama bin Laden lived peacefully in Pakistan under the protection of Pakistan’s security services and the powerful Central Intelligence Agency. Under the far-fetched pretext of improving the material standard of living of the Afghans, the occupation authorities encouraged in every way possible an increase in poppy cultivation and narcotics production, which even according to official data has increased by more than 40 times. Not surprisingly, the sharp increase in drug use in Afghanistan’s neighbouring countries and Europe has led to an increase in the wave of terrorism and various kinds of crime.

The day after Biden announced the withdrawal of US troops, US secretary of state Antony Blinken made an unannounced emergency visit to Kabul, where he met with the Afghan president and other high-ranking Afghan officials. His message was to assure the Afghan government that the US’s military flight was not the end of the US-Afghan partnership — it was ‘changing’ yet it was ‘enduring’.

The US government has also asked international and regional powers with an interest in the security and stability of Afghanistan and South Asia to give it ‘diplomatic assistance in reaching a durable and sustainable peace agreement between the warring parties in Afghanistan.’ These powers include Russia, China, Pakistan, India and Turkey, which are to meet later to discuss the way forward for peace in this country.

Joe Biden’s address to a number of states raises a legitimate question: why didn’t the US consult with the leaders of other countries in 2001, when it rudely invaded Afghanistan and thus disturbed the entire region? And what now? Is the US, by its ill-conceived actions, having destroyed Afghanistan, Iraq, Syria, trying to play innocent by passing the role of saviour to others, who must pull Americans out of the muddy pit into which they have pushed themselves?

Of course, all of these powers have a common interest in ensuring that Afghanistan does not once again become a breeding ground for US-backed terrorist groups such as al-Qaeda and Daesh. A key stabilising element in the Afghan equation will be whether Pakistan and India continue to view Afghanistan as a battleground in managing their confrontation. In the same vein, Iran is also interested in the political stability of Afghanistan, and the western powers, especially the United States, should not rule out cooperation with Tehran in this regard.

Many Arab media outlets believe that the US escape from Afghanistan should only be welcomed by terrorist groups around the world as their major victory, or at least as a reversal of the defeat that the regional and international alliance inflicted on the ‘caliphate’ of Daesh, forcing its members to scatter to remote places in Africa and Asia. If Daesh, al-Qaeda and other groups feel the same way, they will also see this as an opportunity for their new resurgence in the Greater Middle East, stretching from Pakistan to Morocco. And the Arab region will certainly be among the first to feel the effects, given how active these Islamist organisations are in many Arab countries, especially in Iraq, Syria and Libya. This looming threat has made a number of measures more urgent than ever. First, the activities and movements of terrorist organisations in Afghanistan and elsewhere must be closely monitored. Second, Arab governments must cooperate more closely and increase the level of preparedness of their security agencies to respond to new situations in the region. Third, they must work alongside each other to resolve conflicts and restore stability in Iraq and Syria, where strategic gaps still allow radical groups to flourish, recruit and train. Fourth, despite the disgraceful flight of US and NATO troops from Afghanistan, an international conference under UN auspices is needed to promote more intensive global action to prevent the financing and recruitment of terrorist groups. Finally, the US and NATO cannot afford the luxury of continuing to ignore the efforts of countries like Russia, China and Iran, which have not only invaluable experience in the fight against terrorism, but also significant victories in rooting out various terrorist groups. The Arabs will benefit from maintaining close contact with the west and the east in this new and dangerous period in the history of the world and the region. Only if all of these conditions are met can the fight against terrorism and its followers in Afghanistan and other parts of the world succeed.

New Eastern Outlook, May 3. Viktor Mikhin is a corresponding member of the Russian Academy of Natural Sciences.