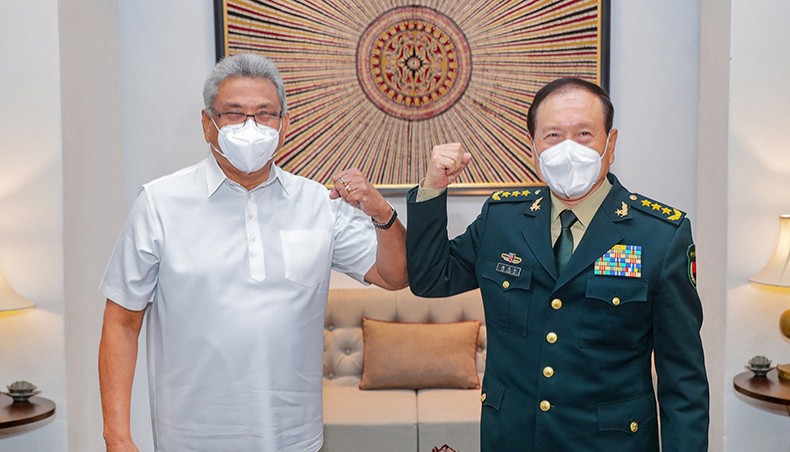 THE fact that the economic crisis looms large in the government’s calculations can be seen in the decisions to save money by replacing the import of chemical fertilisers with locally produced organic fertilisers and unwillingness to tackle the rapid spread of the Covid virus with the same zeal as last year. The Covid spread at this time would call for a total lockdown at least in the crowded urban areas. By Sri Lankan standards, the virus is on the rampage, up from less than 200 per day a month ago to 2000 a day at this time. But the political pressure on the government from the people and from commercial enterprises is to keep the country open. When asked about how Covid is in their areas, most people would say that their greater fear is of lockdown than of Covid. Those in the urban areas, who have to earn their daily wage, prefer to run the risk of Covid rather than face the economic hardship of another lockdown.

The desire to keep the economy running, and giving it a boost, seems to have played a role in the government’s decision not to put the brakes on social mixing during the traditional new year season a fortnight ago, which is being blamed for the spread of the virus. The health authorities had provided advance warning that the new variant of Covid was the UK one, which has a higher capacity to spread easily and be more virulent in its impact. Despite this knowledge being locally available, the government did not crackdown on the social mixing that took place in the run-up to the new year in particular, when pent up consumer demand found expression in packed shopping centres and long distance travel to holiday resorts where social events took place with little or no deference being shown to the Covid guidelines of the health authorities.

The spread of the Covid virus without maximum remedial action being taken to mitigate it is not the only trade off that the government is making in order to keep the economy afloat. The government is now targeting chemical fertilisers which cost the government several hundred million dollars of scarce foreign currency. The government is also under obligation to provide this fertiliser to the farming population without cost as this was an election time promise. But now the government has declared that it will ban the imports of chemical fertilisers on the basis that it is unhealthy for the soil, unhealthy for human beings, with large numbers of people living in some of the farming areas falling prey to kidney disease, and that it places the country in a vicious cycle in which the main beneficiaries are multinational companies.

UPPERMOST in the government’s calculations is the high import bill to which fertiliser imports add their share. Due to the reduction in export earnings and the crippling of the tourism industry that had seen a growth spurt with the end of the three decade long war the country is facing a severe shortage of foreign exchange. Consequently, the government has placed restrictions on imports of what it terms non-essentials. But if this goes on for too long, Sri Lanka can fall foul of the World Trade Organisation, whose mandate is to promote international trade and to mitigate obstacles to trade. However, the government’s decision to ban chemical fertilisers and to revert to more traditional modes of farming, with an emphasis on or organic fertilisers, is not an ad hoc response to the foreign exchange crisis, but runs deeper than that.

The dominant political ideology of the government is nationalism which is propelled by a vision of Sri Lanka as a Sinhala Buddhist country. President Gotabaya Rajapaksa has defended the move to stop the use of chemical fertiliser on the grounds of the negative consequences to human lives through pollution of lakes, canals and the groundwater while the impact on the health sector outweighs any benefits. He has stated that Sri Lanka is the first country in the world to stop the import of chemical fertiliser. A key theme in this ideology is also the struggle to preserve the culture and religion of the nation in the face of repeated invasions and encroachments by foreign powers. The banning of fertiliser imports can also be seen in the light of an attempt to be free from neocolonial domination by multinational corporations that have patent rights on high yielding seed varieties and the chemical fertilisers that are part of the production cycle.

The movement in the direction of economic nationalism has been bolstered by the recent reversal that Sri Lanka experienced at the UN Human Rights Council in Geneva where it lost the vote on the resolution on Sri Lanka. The focus of the UN Human Rights Council on issues relating to the war that ended over a decade ago has now been escalated to the monitoring of ongoing issues of human rights and governance. However, the current situation in Sri Lanka, despite its declining trend line, can be considered as better than in many other countries that are not being subjected to such resolutions. This observation appears to have given rise to a conviction within the government that Sri Lanka is being singled out for discriminatory punitive actions by a group of countries that are hostile to it. This is one of the main reasons for Sri Lankan government leaders to be seeking new allies on whom they can depend for their protection and fairer treatment for the country.

DURING the recent visit to Sri Lanka of Chinese defence minister Wei Fenghe, president Gotabaya Rajapaksa made a statement that Sri Lanka has prioritised developing the relations with China and firmly supported China’s positions on issues concerning its core interests. In addition, the president said Sri Lanka has been pursuing an independent foreign policy and will never bend to pressure from major powers outside the region as well as never forge an alliance with any country. With the 99-year lease of Hambantota harbour and most of the newly reclaimed land from the sea that comprises Colombo Port City to China, and now the proposed port city law that will give it more autonomy than any other territorial unit in the country, Sri Lanka is proceeding at a rapid pace to a closer relationship with China than to any other country.

The desire of the political leadership of any country to be free from relationships of domination and humiliation is worthy of support. It needs to be carefully thought through if it entails the severing of relations with some, especially those with whom there are organic relationships born of history and neighbourhood, and the fostering of new relations with others. Where the economic aspects of agriculture is concerned, chemical fertilisers are now part and parcel of a complex web of interrelationships which include high yielding varieties of crops which are genetically modified and require heavy doses of fertilisers and pesticides if they are to be productive. It will take time for farmers to replant their land with more traditional crops that can sustain themselves on organic fertilisers and also for them to adjust to the lower yields and consequences to their accustomed income flows.

Similarly, Sri Lanka’s shifting traditional foreign policy which has sought to balance between competing superpower blocs and is cognizant of neighbouring India’s own security interests, needs careful assessment. Due to the nearly 500 years of western colonial rule, Sri Lanka’s political institutions and political culture have been moulded by the west with whom Sri Lanka shares organic linkages, not least due to the large Sri Lankan diaspora drawn from all its communities. International institutions too continue to be influenced by the western countries due to their global domination over the past 500 years. All of these are changing with the spectacular rise of China, but this shift in the balance of power is not complete as yet, and is being resisted. It would be best if Sri Lanka did not put all its eggs in one basket. This can be seen in the government’s appeal to India, the United States and to Australia for Covid vaccines that Sri Lankans have more confidence in.