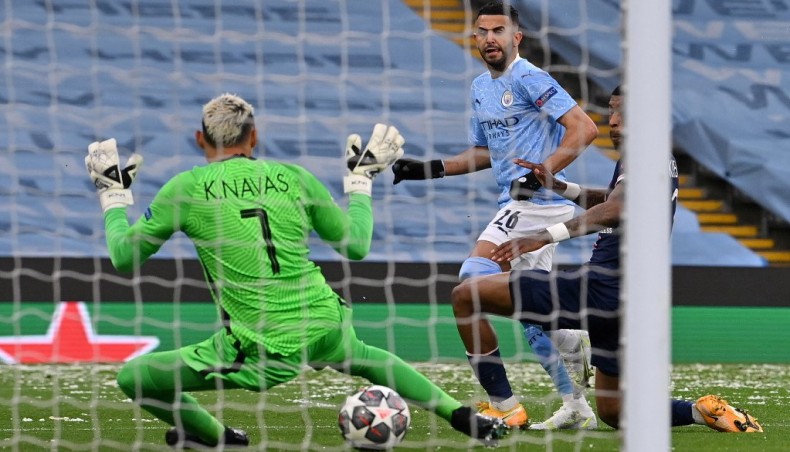 After a decade of disappointment, Pep Guardiola is back in a Champions League final and just one game away from delivering on his task to make Manchester City champions of Europe for the first time.

In the battle between two clubs with seemingly endless resources but no Champions League titles to their name, City kept their cool to beat Paris Saint-Germain 4-1 on aggregate as the French champions paid for losing their heads in both legs of the semi-final tie.

Riyad Mahrez, born and raised in Paris, scored twice to secure a 2-0 win for City in Tuesday's second leg before Angel di Maria's red card for lashing out at Fernandinho rounded off another miserable European exit for the French champions.

A first Champions League final for City, against Real Madrid or Chelsea in Istanbul, is the culmination of the club's rise since an Abu Dhabi takeover in 2008 transformed their fortunes.

In the coming days, they will seal a fifth Premier League title in the past 10 years.

Once dubbed the ‘noisy neighbours’ by legendary former Manchester United manager Alex Ferguson, City are now not just the dominant force in Manchester but also in English football.

By the end of the month, the mix of Emirati wealth and Guardiola's coaching may have also conquered Europe.

‘Of course we invest a lot of money since Sheikh Mansour took over, but it is not just this,’ said Guardiola. ‘It is a lot of incredible things behind the scenes.

Since a difficult first year in England, Guardiola has led City to four League Cups, an FA Cup and the brink of a third Premier League title in four seasons.

However, until now, that domestic success always came with the caveat of Champions League collapses.

Guardiola has won the competition twice before as a coach during his time at Barcelona, but not since 2011.

City did not even progress beyond the last eight in his first four seasons in charge.

It was a similar story for the Catalan in his three years at Bayern Munich between 2013 and 2016 as three Bundesliga titles were overshadowed by three semi-final exits to Spanish opposition.

‘People believe because it happened in the past I have to arrive every year in the final of the Champions League,’ added Guardiola.

‘This is a little bit unfair because the consistency these guys have shown in every competition these last four or five years is remarkable.’

City exorcised many of their Champions League demons against PSG.

This time an early penalty awarded against Oleksandr Zinchenko was overturned after a VAR review, Mahrez was deadly with his two chances and City's much-improved defence withstood a first-half barrage.

‘The first-half they were so good but we defended so well. We defend all together, helped each other,’ said Guardiola after a 31st clean sheet of the season.

‘To reach the final in this competition is so difficult. It is the toughest one for the quality of the opponents, the composure you have to have and to suffer the toughest moments. We did it.’

Win one more game on May 29 and Guardiola will be among a select band of just three other managers -- Bob Paisley, Carlo Ancelotti and Zinedine Zidane -- to win the European Cup three times.

With already 25 major trophies to his name in just 12 seasons in charge of Barca, Bayern and City, the 50-year-old can silence any lasting doubters and cement his status as one of the greatest coaches of all-time with victory in Istanbul.