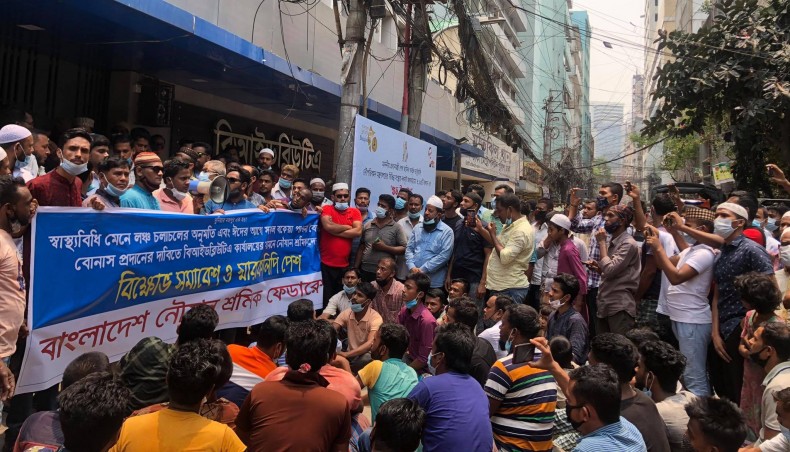 The government on Wednesday extended the current restrictions on public movement and overall activities aimed at containing the Covid situation till May 16 midnight amid increasing crowds after the reopening of shops and shopping malls ahead of Eid-ul-Fitr.

Inter-district public transports would resume operations today after 22 days while a ban on train, launch and inter-district bus services would remain in force, said a circular issued by the Cabinet Division to this effect.

Officials and employees of all government, semi-government, autonomous and non-government offices shall stay at their respective work stations, said the circular.

The Cabinet Division asked the authorities concerned for measures to ensure mandatory use of masks and punish those violating the order through mobile courts if necessary.

It said all social, political and religious programmes that necessitate public gatherings must be stopped during the restriction period.

On the 22nd day of the current restrictions, a huge number of vehicles created traffic congestion at the intersections in Dhaka city amid the increasing rush of people to shopping malls, kitchen markets and street hawkers as Eid-ul-Fitr is approaching.

Following the relaxation of the restrictions, the infection rate would increase sharply as people from more infected places might travel to low-infected areas, public health experts expressed fear.

Waterways workers demanded resumption of launch service on the same day and urged the launch owners to pay all arrears to the workers by May 10.

Cabinet secretary Khandker Anwarul Islam said on Monday that the ban on public transports would be relaxed only for district buses to operate within each district from May 6 as the current restrictions extended in phases since April 14 ends on May 5.

Buses would operate within districts and cities, like the buses of Dhaka city would ply the city roads only, he added.

About the Eid vacation, the cabinet secretary said Eid might fall on May 14 and the three-day public holidays on the occasion might include the weekends — Friday and Saturday.

The businesses and industries operating during the restrictions would not be allowed to extend the three-day Eid holidays to avoid outflux of people from cities during the festival, he said.

The immediate past April was the worst month in terms of lives lost to Covid-19 in Bangladesh with 2,404 deaths, almost double the figure in July that saw 1,264 deaths when the first wave of the pandemic peaked after the virus was detected in March 2020.

The country’s Covid death toll reached 11,755 and the number of cases 7,67,388 so far, according to the Directorate General of Health Services data updated on Wednesday.

Traffic congestions were seen in different areas in Dhaka throughout Wednesday and markets were teeming with shoppers as Eid-ul-Fitr is approaching.

Hawkers and their customers also crowded the footpaths.

Many people ignored Covid health practices like wearing masks while most flouted the social distancing norms.

Under the banner of Bangladesh Waterways Workers Federation, the workers brought out a procession from the Banglabazar area and came in front of Bangladesh Inland Water Transport Authority headquarters in Dhaka on Wednesday where they staged demonstrations.

They submitted a memorandum to the BIWTA chairman commodore Golam Sadeq demanding the immediate resumption of launch services and all arrears including salary and bonus to be paid.

‘We did not get any relief from the government or the owners since April 5,’ said the federation president Shah Alam Bhuiyan.

Some of the workers who participated in the demonstration alleged that they did not get their salaries for three months while the bonus for Eid-ul-Fitr also became uncertain in the current situation.

BIWTA chairman commodore Golam Sadeq told New Age that there was no chance for resuming launch services before Eid as the restrictions have been extended till May 16 and added that they would ask the launch owners to pay the arrears to the workers before Eid.

Earlier, Bangladesh Road Transport Workers’ Federation leaders and activists are also pressing for the immediate resumption of bus services on all routes.

Earlier on April 5, the government imposed an 11-point restriction on public movement and businesses.

The previous restrictions were extended till April 14 amid widespread violations as many people came out of their homes while others went shopping, crowding markets despite high risks of infection in the capital as in the other cities.

Industries have been kept out of the purview of the shutdown since April 14 but all offices — both public and private — save for those providing emergency services have remained closed.

According to the Cabinet Division circular effective from April 14, no one is permitted to move outside home without an emergency and the operation of all modes of public transport, including international flights, is banned during the period of restrictions, but the restrictions were largely ignored.

The government, however, allowed all banks to continue their activities daily for a limited period from April 14, allowed domestic flight operation on all but Cox’s Bazar route from April 21 and opened shops and shopping malls from April 25.