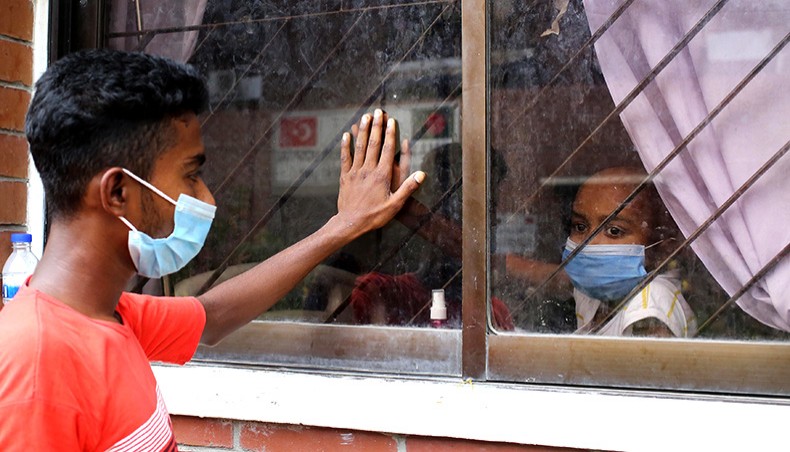 A relative of seven-year-old Atikul, who is undergoing cancer and Covid treatment at an isolation ward of Dhaka Shishu Hospital, communicates with him through a window standing outside the hospital on Sunday. — Sourav Lasker

The South African variant of the novel coronavirus has been detected in child Covid patients at Dhaka Shishu Hospital as the number of the hospital’s coronavirus cases rose threefold in April compared to the previous month.

The DSH, the major referral hospital for children in the country, has recorded 27 Covid deaths of children below 10 years among 44 in total across the country.

‘We have found the South African variant of the coronavirus after the genomic analysis of the cases in our hospital,’ said Kinkar Ghosh, epidemiologist at the DSH.

‘The number of child Covid cases in our hospital has also increased more than three times in the second wave of infections,’ he told New Age on Tuesday.

Last month a joint research by the Institute of Epidemiology, Disease Control and Research and the ICDDR, B found that over 81 per cent of cases they analysed were infected with the South African variant, which is reportedly more contagious and more fatal than the earlier variant prevailing in the country.

Kinkar said that the percentage of cases in their analysis was not much higher compared to the IEDCR and ICDDR,B study, adding that their study was now under review by The Lancet.

According to the Directorate General of Health Services, about 3 per cent of the country’s 7.65 lakh Covid cases are under-10 children.

Since the virus was detected in the country in March 2020, the DSH treated 493 child Covid patients.

This year, the children’s hospital recorded 33 cases in April while the figure was 10 in March, five in February and nine in January.

The highest number of monthly cases the hospital treated was 111 in June last year.

Of the 27 under-10 Covid deaths the hospital recorded, three were in April and two in March while no death was recorded in the previous three months.

The highest number of monthly child Covid deaths recorded was 6 in August and November each last year.

Among the deceased, about 37 per cent were aged below one month while 23 per cent between one month and 12 months, meaning that the children were infected by their parents or caregivers.

Asked about if there were any reasons for the rise in child Covid patients, Kinkar said that they found the South African variant of the virus in their cases but there were other reasons, too.

‘The infected were actually less immune as they were suffering from malnutrition,’ Kinkar said.

The child Covid patients had also other comorbidities, including pneumonia, septicaemia, heart diseases and infections caused by surgeries, he added.

‘Malnutrition and comorbidities are taking a toll on children’s lives while the parents or caregivers were actually infecting the infants,’ Kinkar said.

Bangladesh, which has so far confirmed 7.65 lakh Covid cases and 11,705 deaths, have been going through a second wave of infections since the beginning of March this year after a comparatively better situation in January and February this year following a gradual improvement since last September.