Abahani back to winning ways 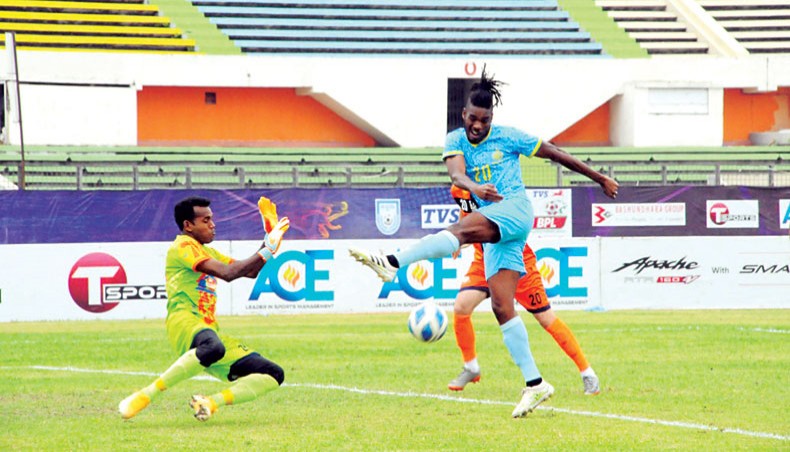 Six-time champions Abahani Limited returned to winning ways when they beat relegation-threatened Brothers Union 5-2 in their second match of the second-leg of the Bangladesh Premier League at the Bangabandhu National Stadium on Tuesday.

Nigerian midfielder Ugochukwu Magalan pulled two goals back for Brothers, scoring in the 77th minute and in the stoppage time.

Abahani looked organised throughout the game, keeping majority of the possession from start to finish while Brothers spent most of the 90 minutes in their own half, trying and failing to keep Abahani from scoring.

Sunday opened the account for Abahani in the 22nd minute when his volley from goalmouth found the back of the net following a long throw-in by defender Rayhan Hasan.

Unmarked Nasir doubled the margin in the 40th minute with a header from the box, again after a throw-in by Rayhan.

Jewel made it 3-0 in the 44th minute following a corner from the right side by Brazilian midfielder Raphael Augusto.

Belfort extended Abahani’s lead to 4-0 in the 62nd minute after Sunday provided a pass from midfield to the Haitian, who sent the ball home with a right-footed drive from inside the box.

Magalan scored for Baridhara from a counter-attack in the 77th minute with a left footed-drive from inside the box before Rubel made it 5-1 for Abahani in the next minute with a chip past Brothers’ keeper Jafor Sardar.

Magalan reduced the gap in the stoppage-time, scoring from a penalty.

Magalan was fouled by Abahani defender Mamun Mia inside the box and the referee GM Chowdhury Noyon did not hesitate to award the penalty to Brothers.

In the day’s second match, Kings took 58 minutes to break the Police defence as Sabuj broke the deadlock with a header following a cross from Brazilian forward Robson Azevedo.

Kings defender and captain Topu doubled the margin in the 62nd minute also with a header.

With the day’s win, Kings remained at the top of the table with 40 points from 14 games.