Bangladesh opens up submarine cable licence for local, foreign cos 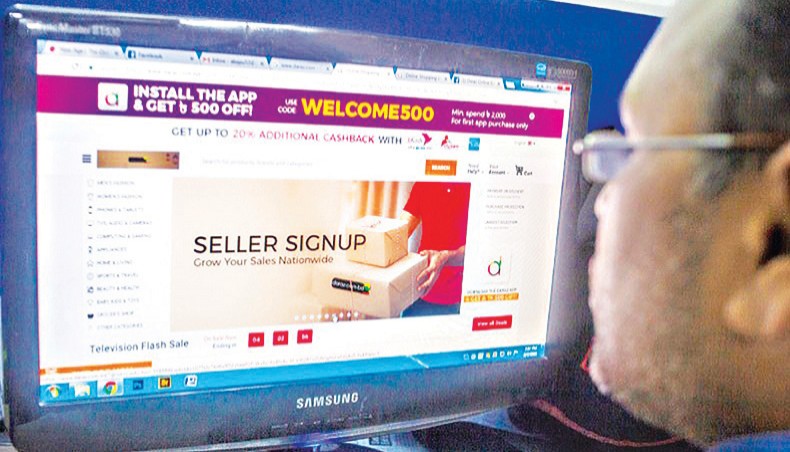 A file photo shows a man browsing an e-commerce site on a computer in Dhaka. The government has opened up the submarine cable licensing regime for private companies in apprehension that the country may fall into bandwidth scarcity by the year 2024 when the country’s demand would reach 6 terabyte per second. — New Age photo

Bangladesh government has opened up the submarine cable licensing regime for private companies in apprehension that the country may fall into bandwidth scarcity by the year 2024 when the country’s demand would reach 6 terabyte per second.

The country’s appetite for bandwidth consumption has been growing fast over the years and the outbreak of coronavirus has enhanced the growth rate further, prompting the government to go for alternative sources of bandwidth.

Bangladesh Telecommunication Regulatory Commission data showed that the country’s bandwidth usage jumped by 634 Gbps to 1,826 Gbps in November 2020 while the demand was 1,192 Gbps in December 2019.

Of the bandwidth supplied to the users, lone state-owned entity Bangladesh Submarine Cable Company Limited is supplying around 85 per cent of the demand due to its cost efficiency and reliability.

When the country’s demand would reach 6 Tbps by the year 2024, the capacity of BSCCL’s existing capacity can be enhanced to 3,800 Gbps from 2,800 Gbps by upgrading its system, BSCCL managing director Mashiur Rahman told New Age.

However, the country’s capacity to provide bandwidth is expected to increase by 6 Tbps when the country would get connected to the submarine cable by March of the year 2024, he said.

Even though Bangladesh would get the additional 6 Tbps in 2024, any complexity in the submarine cable within the period would create a major problem for the country unless any other alternative is ensured, an official of BTRC said.

To avoid such predicament, the BTRC has already secured approval of the posts and telecommunications ministry to issue licences to multiple entities to supply bandwidth to meet the country’s growing internet demand.

Earlier, the regulatory and licensing guidelines for invitation of offers or proposals for issuing licences to build, operate and maintain submarine cable systems and services only had provision to allow two companies to issue licences.

‘The licence to operate submarine cable will be issued not only to private companies but also to the companies owned fully by foreign companies,’ posts and telecommunications minister Mustafa Jabbar told New Age on Tuesday.

‘We think it would be wise to ensure competition in this business segment so that the customers get benefit out of enhanced competition,’ Mustafa said.

The minister said that both local and international companies are eligible to submit applications for licences now under the amended guidelines, and the commission would scrutinise the applications accordingly.

In the scrutiny, the commission would examine whether the applicant has the financial or technical capacity to operate a submarine cable company, he said.

‘Right now, we have not any sort of bandwidth shortage,’ he said.

To enhance the capacity, the country has decided to join the consortium of SEA-ME-WE-6 at a cost of Tk 693.16 crore.

Of the cost, the government would provide Tk 392 crore to BSCCL and rest Tk 301 crore will be provided by BSCCL itself.