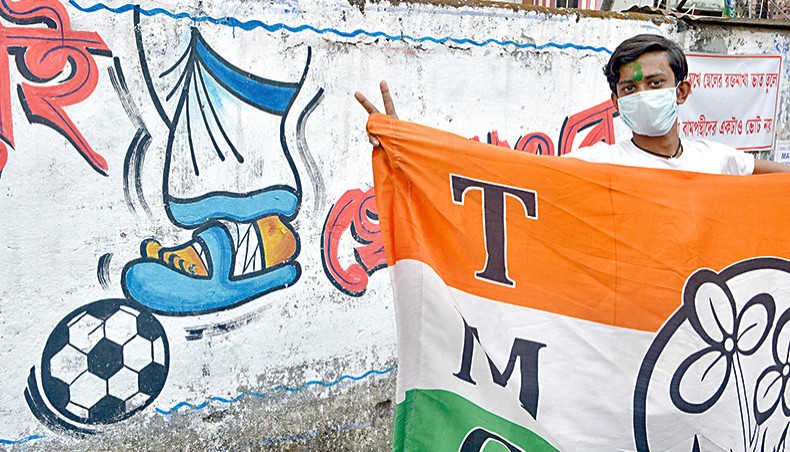 A supporter of the All India Trinamool Congress celebrates the party’s lead in front of a mural depicting the injured foot of the AITC leader Mamata Banerjee during the counting process of the West Bengal legislative assembly election in Siliguri on May 2. — Agence France-Presse/Diptendu Dutta

IT WAS a crucial make-or-break vote that PV Narasimha Rao faced when Mamata Banerjee was ushered in in a wheelchair and helped to her seat in the packed and tense Lok Sabha. From the press gallery above, one could see her shaking with spasm under the woollen blanket that wrapped her. The fever from malaria ran high and she struggled to control waves of rigour that usually come with the affliction. Eventually, Rao won the trust vote with the narrowest of margins. She did her duty by the Congress party and contributed in her way to the early economic reforms, which usually Rao and Manmohan Singh are credited with.

Now, the tycoons her vote had helped become rich with the inauguration of India’s top-down neoliberal policies were switching sides. Their money power was transferred to prime minister Narendra Modi’s party. All the loot one could imagine was thrown into the humongous effort to dislodge Mamata Banerjee. She though was confidently plotting the fight back for a third consecutive term as chief minister of West Bengal. Her secular resolve and populist economic priorities can be gleaned from her modest cottage surrounded by lower-middle-class homes and shanties in a nondescript Kolkata district. The Trinamool Congress she set up was itself a critique of the Congress, which had nurtured her as a youth leader but was beginning to be associated with wealth and pelf.

Trinamool means ‘grassroots’ in Bangla, the name of her party suggesting her plain thoughts about her parent group, which she had left with a mission. It was May 2, when the results came in, the same day as Satyajit Ray’s birth centenary someone pointed out. Bengal has been shaped by Ray, Nazrul Islam and Tagore, by Vivekanand and Kali worship. For her to open her account in West Bengal her worldview had to challenge also the invincible communist hegemony, much of it secured under Jyoti Basu’s watch. He had steered the state for most of the three decades of Left Front rule since 1977, a handy reward for steadfastly fighting Indira Gandhi’s emergency.

After Basu retired citing age, the party’s fortunes quickly melded with the economic chaos reigning in India. The party evicted small peasants from fields to make space for industry, a lesson they erroneously believed could be bodily lifted from China. If Nandigram and Singur were what the comrades saw as aspects of ‘socialism with Bengali characteristics’, the move boomeranged, and Mamata Banerjee pounced on the opportunity.

During much of the post-Basu rule, communist priorities in West Bengal had dovetailed with the core quests of the Vajpayee-Advani duo in Delhi. The Marxist chief minister of West Bengal and the BJP home minister of India found a common cause, which were two causes, in fact. They both desired to deal decisively with the Maoist challenge, and both harboured strong reservations about a real or an imagined influx of people from Bangladesh. This inevitably worked as a wedge that eventually drove many Muslims away from the party, while alienating many who opposed harsh solutions to tackle the Maoists.

Marxist chief minister Buddhadeb Bhattacharya reportedly went a step further in his induced aloofness from a people who he had no use for. He turned down a request from a fellow partisan in Delhi to help the Progressive Writers Association host an Urdu conference in Kolkata. ‘Do you want me to patronise another partition?’ he had exploded.

Sunday’s election results saw the CPI-M dwindling to just one seat from its 2016 tally of 26 in the 294-seat assembly. Self-criticism and introspection don’t seem to go well with the current crop of Indian partisans. They have blamed their decline on state terror supposedly unleashed on the party by Mamata’s followers. If that were true, why did the cadre switch over en masse to the BJP? And did the communists really hope to challenge the BJP had it succeeded in defeating Mamata Banerjee in the recent polls? The election results have shown how the left votes helped in the narrow defeat of Mamata Banerjee in Nandigram.

This mindless game of revenge and short-sighted gambits to somehow crawl back to power has harmed the left enormously. It has dented also the cause of opposition unity needed to urgently arrest the erosion of India’s democracy under prime minister Modi. The party may learn from the DMK in Tamil Nadu under whose umbrella it could win two seats in the southern state, one more than its dismal show in West Bengal.

Mamata Banerjee has periodically invited the communists to join her struggle against the essentially anti-federal, anti-secular character of the BJP. This has also been the quest of Kerala’s Marxist chief minister Pinarayi Vijayan, who landed a record second consecutive term by defeating the Congress. Ironically, it’s these two parties that are holding opposition unity to ransom, as both have displayed a marked inability to identify self-harm in their cherry-picking of friends and foes. The Marxists offer a terrible logic of being adversaries of the Congress in Kerala and its allies elsewhere. What kind of a national messaging does that invite? Was it a good idea for them to join hands against the Trinamool Congress in West Bengal, granted that they at least benefited from being together in Tamil Nadu?

Everyone has congratulated Mamata Banerjee on her fine victory against extremely heavy odds posed by the combined strength of India’s right, left and centre parties. She has shown them their place. A Shiv Sena leader called her the ‘Tigress of Bengal’. Arvind Kejriwal, MK Stalin, Akhilesh Yadav and Sharad Pawar, no small-time leaders, have greeted her with renewed hope to stall the march of fascism. The question is, will the Congress and the Left Front work with Mamata Banerjee? Or will they persist with their misplaced zeal to inflict harm on themselves, and thereby on India’s struggling democracy?

Dawn.com, May 4. Jawed Naqvi is Dawn’s correspondent in Delhi.