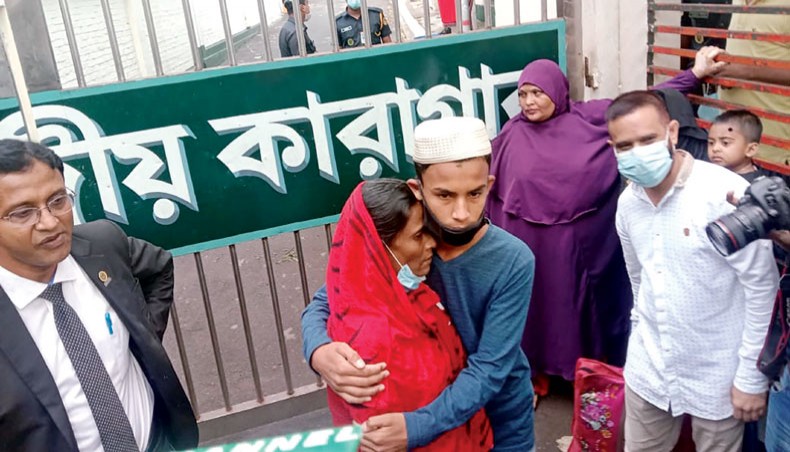 A relative hugs Hasina Begum at the gate of Chattogram Central Jail as she was released following a court order on Tuesday after she had been wrongly sent to jail one-and-a-half years back in a narcotic case. ­— New Age photo

Hasina Begum, who was serving jail term instead of the real convict in a narcotic case after police had wrongly arrested her for the similarity of her name to the convict’s, got bail on Tuesday.

Hasina Begum, wife of Hamid Hossain of Teknaf upazila in Cox’s Bazar district, has been serving the Chattogram central jail for 16 months and 20 days instead of the real convict.

The incident came in the limelight on Sunday as the lawyer Golam Mawla Murad drew the attention of the judge of the Chattogram Additional Metropolitan and Session Court4, Shariful Alam Bhuiyan, following a police investigation.

‘No case was filed against Hasina Begum. But she has been serving jail for 16 months and 20 days for no reason,’ the lawyer Golam Mawla Murad said.

Murad filed a petition seeking the immediate release of innocent Hasina Begum and the court took cognizance of the plea and asked the jail super to submit a report in this regard by May 4.

According to the case statement, police recovered 2,000 Yaba pills from Moijjartek at Karnaphuli on February 24, 2017 and a case was filed in this connection.

Later, police arrested Hasina Akhter on February 25, 2017 in this connection.

On November 27, Hasina Akhter secured bail from the court and went into hiding.

On December 26, 2019, police wrongly arrested Hasina Begum from Chowdhury Para at Teknaf in the case.