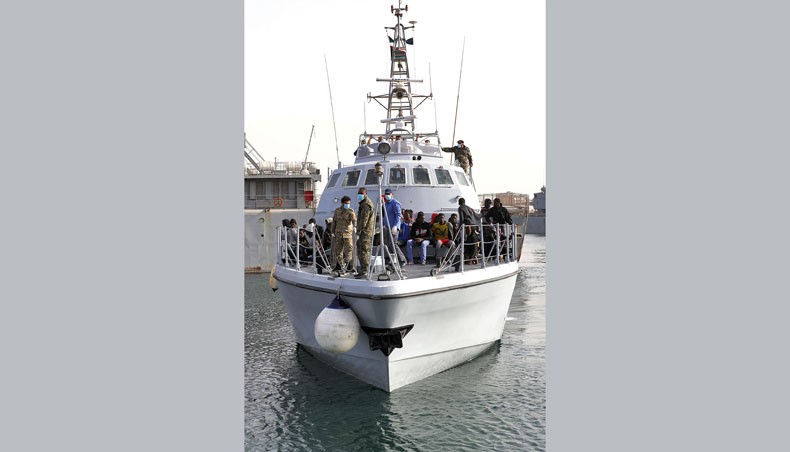 Migrants arrive at the naval base in the Libyan capital of Tripoli on April 29, 2021 after the coastguard intercepted an inflatable boat carrying 99 Europe-bound migrants off its west coast. — AFP photo

As the waves pounded the grey rubber boat carrying more than 100 Africans hoping to reach Europe from Libya, those aboard dialled the number for migrants in distress frantically. In the series of calls to the Alarm Phone hotline, passengers explained that the dinghy had run out of fuel while trying to cross the Mediterranean Sea and was quickly filling up with water and panic.

On the other end of the line, activists tried to keep the migrants calm as they relayed the boat’s GPS coordinates repeatedly to Italian, Maltese and Libyan authorities and later to Frontex, the European Union’s border and coast guard agency, hoping authorities would launch a rescue operation as required under international maritime law.

An analysis of logs and emails from Alarm Phone and the NGO SOS Mediterranée as well as reports by the Libyan coast guard show that the national authorities contacted responded slowly, insufficiently or not at all to the pleas for help. In all, approximately 130 people are believed to have died between April 21 and April 22 as they waited in vain for someone to save them, roughly 45 kilometres from the Libyan coast.

It was the deadliest wreck so far this year in the Mediterranean Sea, where more than 20,000 migrants or asylum seekers have perished since 2014, and has renewed accusations that European countries are failing to help migrant boats in trouble.

Instead, human rights groups, the UN’s migration and refugee agencies and international law experts say European countries too often ignore their international obligations to rescue migrants at sea and outsource operations to the Libyan coast guard despite its limited capacity, reports of its ties to human traffickers, and the fact that those intercepted, including children, are placed in squalid, overcrowded detention centres where they face abuse, torture, rape and even death.

European nations, of course, routinely rescue migrants in distress. Since the April 21 wreck alone, the Italian coast guard and navy have rescued at least 149 people near its coasts. Spanish authorities, meanwhile, deployed military planes and helicopters as well as rescue ships to airlift three people and recover the bodies of 24 who had died in a wreck April 26 nearly 500 kilometers (310 miles) from the country’s Canary Islands.

But no such rescue came on April 21. A day later, merchant vessels sailing in the area and a humanitarian rescue ship, the Ocean Viking, found the boat’s remains and reported seeing at least 10 bodies floating on the surface. One of the deceased was hunched over a ring buoy, face in the water.

‘I was supposed to be one of the drowned,’ 27-year-old Mutawakel Ali said recently from Libya. He and five other Sudanese missed the boat’s departure on April 20 from al-Khums by a few minutes because they had stopped on their way to the coast to break their daily Ramadan fast.

But his 23-year-old cousin Mubarak Jaber did not escape. Jaber, the oldest of seven brothers, had quit his economics studies at university and headed for Libya to look for a job a year and a half earlier. He worked in construction, sending money back to his relatives struggling in Sudan’s deteriorating economic crisis.

But it still wasn’t enough, so he contacted smugglers and boarded the migrant boat.

The rescue and coordination centres of Libya, Italy, Malta were first alerted by Alarm Phone that the boat needed help at 9:52am. Central European Summer Time the next day, according to emails seen by The Associated Press.

Alarm Phone and SOS Mediterranée say they never received any response from Maltese authorities. The Armed Forces of Malta, responsible for maritime search-and-rescue operations, did not respond to several requests for comment from the AP.

It was only at 2:11pm, more than four hours later, that Alarm Phone received a response from Italian authorities, asking the activists to inform the ‘competent authorities’ without specifying who those were.

Alarm Phone was only able to reach a Libyan officer five hours after the first alert, at 2:44pm. They were told that the Libyan coast guard was indeed searching for three boats in the area – but with only one vessel, the Ubari.

A day after the wreck, Libyan coast guard spokesperson Masoud Ibrahim Masoud told the AP that his agency had found 106 migrants and two bodies from two other boats. Due to worsening weather and the poor health of those already found, they returned to port before locating the third boat, he said, adding that the support received from the EU was insufficient.

Frontex, which only patrols the Mediterranean by air, said it deployed two planes after being requested to do so by the Italians, one on April 21 that spotted the boat in distress and another one on April 22.

‘Frontex did exactly what it had to do and above and beyond,’ the agency’s spokesperson Chris Borowski told AP on April 24. ‘We alerted national rescue centres, we issued a mayday call to any vessel in the area to come to the rescue, and we stayed there as long as we could.’

But that mayday message was only sent at 7:15pm according to SOS Mediterranée, more than nine hours after Italian, Maltese and Libyan authorities were first alerted. It is unclear why those three rescue and coordination centres did not issue an alert to vessels in the region sooner.

Frontex blamed the deaths on smugglers and deteriorating weather. On the night of April 21, waves reached 2 to 3 meters high.

Questioned by the AP about its role, the Italian coast guard referred back to a statement issued following the initial wreck. ‘The event took place in the Libyan search-and-rescue responsibility area. The Libyan authorities took over the coordination of the event,’ read the statement from April 23.

Legal experts consulted by the AP, however, said that even though a boat in distress may be in one country’s search-and-rescue zone of international waters, it does not relieve other authorities of responsibility.

‘The manner in which each of the European actors contacted attempted to deflect or ignore responsibility can be constitutive of a violation by omission of the relevant obligations under international law,’ Violeta Lax Moreno, founder of the immigration law program at Queen Mary University of London, explained in an email.

Earlier this year the independent Human Rights Committee, working with the United Nations, ruled that Italy failed to protect the ‘right to life’ of over 200 migrants and refugees who died when the boat they were on sank in the Mediterranean in 2013. In that case, the boat was inside the Maltese search-and-rescue area – but the experts determined that Italian rescuers might have been able to prevent the tragedy if they had acted quickly. They have urged Italy to investigate and prosecute anyone responsible.

Still, Europeans rely heavily on the Libyans, who, with European encouragement, registered a massive search-and-rescue area in the Mediterranean with the International Maritime Organization in 2018, including an area where Italy previously conducted rescues.

Frontex also works closely with the Libyan coast guard to help them intercept migrants. According to a recently published investigation by media organizations Der Spiegel, Lighthouse Reports, ARD and Libération, European planes guided the Libyan coast guard to migrant boats in distress at least 20 times since January 2020. During those interceptions some 91 migrants and refugees died or are went missing, the investigation found.

When the Ocean Viking asked Frontex for aerial support on April 22 to find the boat in distress, it says it got no answer.

Questioned about the EU’s role in responding to the April 21 wreck, European Commission spokesperson for home affairs, Adalbert Jahnz, lamented the deaths but said the commission could not comment because ‘we have no competence or influence’ on the matter and that search-and-rescue operations were conducted and coordinated by national authorities.

Compounding the April 21 tragedy, none of the European or Libyan authorities involved ever picked up the bodies found floating in the water. The crew of the Ocean Viking ultimately made the difficult decision not to pick up any of the bodies to allow the ship to continue to conduct rescues and because it was told the Libyans were on their way. It went on to save 236 people.

The families will never be able to bury their loved ones, and without bodies, it will be more difficult to investigate the deaths.

Setena Abdalla sobbed as she spoke from her home in Omdurman about the death of her only son: 24-year-old Mohammed Abdel-Khaliq.

‘He was my whole life,’ said the 54-year-old single mother.

Abdel-Khaliq had already attempted the crossing once before but was intercepted and placed in a detention center for two months. On another two occasions, smugglers took his money and did not show up. Still, he was determined to try again. On April 19, he phoned his mother for the last time.

‘I appealed to him not to travel,’ she said.

But Abdel-Khaliq went anyway and now remains forever in the Mediterranean Sea.