Biden to allow 62,500 refugees into US after criticism 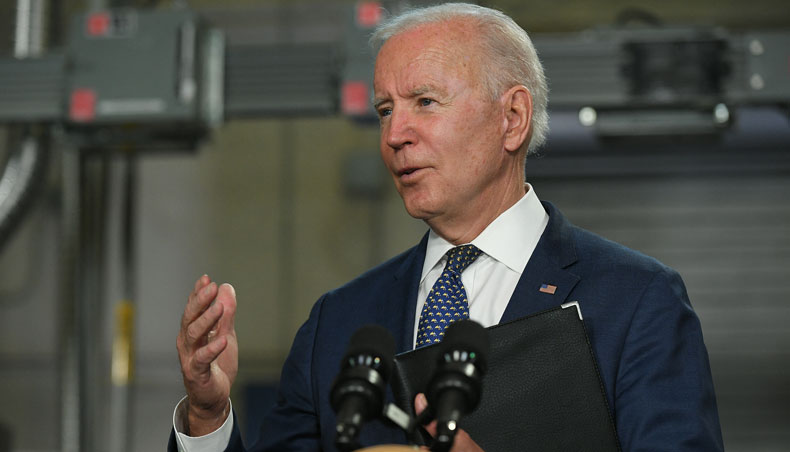 US president Joe Biden speaks on the American Jobs Plan, following a tour of Tidewater Community College in Norfolk, Virginia on May 3, 2021. — AFP photo

President Joe Biden announced on Monday, after coming under fierce criticism, that he was raising the maximum number of refugees allowed into the United States this year to 62,500 – up from the 15,000 cap imposed by his predecessor Donald Trump.

The change follows backlash from allies over Biden’s earlier decision to keep the Trump-era limits – a politically costly moment of confusion that stood out in a White House notable for its iron discipline in its first three months.

‘This erases the historically low number set by the previous administration of 15,000, which did not reflect America’s values as a nation that welcomes and supports refugees,’ Biden said in a statement.

‘The new admissions cap will also reinforce efforts that are already underway to expand the United States’ capacity to admit refugees, so that we can reach the goal of 125,000 refugee admissions that I intend to set for the coming fiscal year,’ he added.

The programme is only for refugees selected by US security and intelligence agencies from United Nations camps around the world.

The course correction was quickly welcomed by the Senate Foreign Relations Committee, which is controlled by Biden’s Democratic party.

‘I welcome the Biden administration’s announcement that it will increase the number of refugees allowed to be resettled in the United States. This is an important step in continuing our proud, bipartisan tradition of providing refugees protection through resettlement,’ the committee chairman, senator Bob Menendez, tweeted.

The American Civil Liberties Union, a powerful advocacy group, also voiced approval, saying that the country’s ‘reputation’ was at stake.

‘We are pleased to see president Biden has abandoned the Trump administration’s abysmal refugee goal and recommitted to prioritizing helping people who are fleeing persecution around the globe,’ ACLU representative Manar Waheed said.

‘We recognise that the goal may not be easy and it requires rebuilding a system that was decimated by the Trump administration, but candidate Biden promised,’ Waheed said, adding, ‘He must fulfil that promise, lives are at stake.’

Trump clamped down on refugees as part of the hard-line border policies at the heart of his nationalist political platform.

Biden campaigned on promises to restore more traditional US attitudes. But he then backtracked after his government ran into difficulties in handling a surge of migrants entering the country illegally or claiming asylum at the Mexican border.

Last month, the White House said it needed more time to ‘rebuild’ the post-Trump refugee program and would therefore keep the cap at 15,000 for the year.

After a top Democrat and refugee aid groups slammed Biden’s target as ‘appallingly low’ and ‘deeply disappointing,’ the White House issued a statement hours later saying the low number was only provisional.

In another shift from Trump’s policies, Biden announced in April that quotas were being expanded for refugees from Central America, the Middle East and Africa, while also opening the doors to three mostly Muslim countries – Somalia, Syria and Yemen.

With Monday’s announcement, the White House will hope to have calmed the political waters among Democrats just when it needs party unity to push forward on huge proposed social and infrastructure spending plans in an almost evenly divided Congress.

‘We are amid the largest global refugee crisis in history, and after four years of slashing admittances to the lowest point on record, we need to return to our leadership position,’ another Democratic senator, Tim Kaine, said.

‘I am heartened by today’s announcement that moved toward upholding our values of accepting refugees,’ he added.

Trump set the 15,000 cap nearly a month before the November 2020 presidential election, which he lost.

Under his predecessor, Democrat Barack Obama, with whom Biden served as vice president, an average of 100,000 people were welcomed into the United States each year.

‘It is in our DNA as a nation to open our door to those seeking refuge,’ said US secretary of state Antony Blinken in response to Biden’s announcement Monday.

‘It remains in our national interest to treat individuals applying for these programs fairly and with dignity and respect,’ he added.