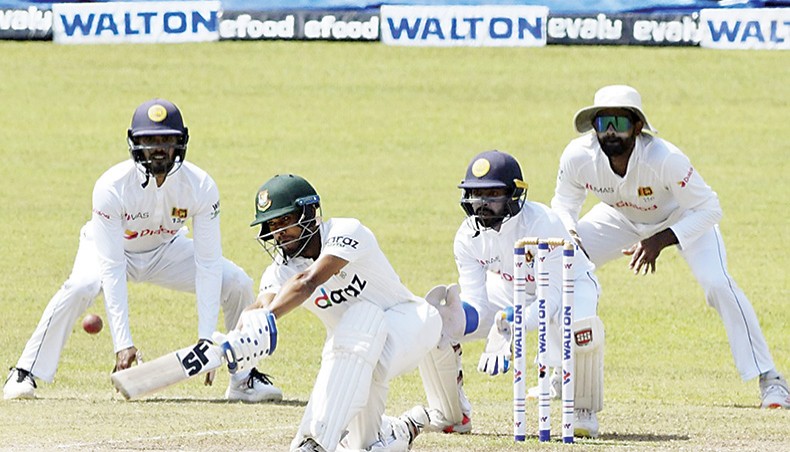 Bangladesh all-rounder Mehidy Hasan plays a shot on the fifth and final day of their second Test against Sri Lanka at the Pellekele International Cricket Stadium in Kandy on Monday. — AFP photo

On Monday, Bangladesh lost the second Test against Sri Lanka by 209 runs and the match also wrapped up the league stage of the World Test Championship, a structured format launched by the ICC to make the red-ball cricket more exciting and competitive.

The WTC opened a window for Bangladesh to play Test matches against stronger oppositions who often deny playing Tests against the Tigers.

However, the entire fixture of WTC was scrambled by the coronavirus pandemic and Bangladesh missed out of hosting Australia and New Zealand but they got to play their first two-Test series in India.

Overall, the entire WTC campaign was like a nightmare for Bangladesh as they managed to claim only 20 points from seven matches where they lost six and drew only one.

The biggest blow was losing to a weakened West Indies team at home which could have given Bangladesh’s points tally some respectability but in the end, it further exposed the team’s vulnerability in the longest format of the game.

Mominul, who began his journey as captain in the first match of WTC against India, is dissatisfied with the team’s performance in the competition.

‘How would you evaluate our performance? I don’t think we improved much in any of the WTC matches,’ Mominul said on Monday in the post-match press conference in Kandy.

‘I think we performed well in the first Test in Sri Lanka. The bowlers did well in the second Test, but the batting collapsed. I think there was a little improvement in this series but apart from the 20 points, there isn’t much to say,’ he added.

After securing a draw in the first Test on a barren surface, Bangladesh suffered a big defeat in the following match, where Sri Lanka’s inexperienced finger spinners bamboozled the Tiger batters.

Chasing a mammoth 437-run target, Bangladesh batters adopted an attacking approach, which in the end backfired.

Mominul, however, defended the strategy, claiming it was necessary on the pitch, rather said that the execution was not up to the mark.

Despite losing the series 0-1, Mominul sees some positives from the tour.

‘There are certainly a lot of positives. Losing the series doesn’t mean we lost everything... Tamim [Iqbal] made two nineties, and one seventy. [Nazmul Hossain] Shanto made 163 while Mushfiq [Rahim] bhai and Liton [Das] got a fifty each.

‘I think everyone got excited seeing our pace bowlers doing well. Taskin [Ahmed] especially has improved a lot.’