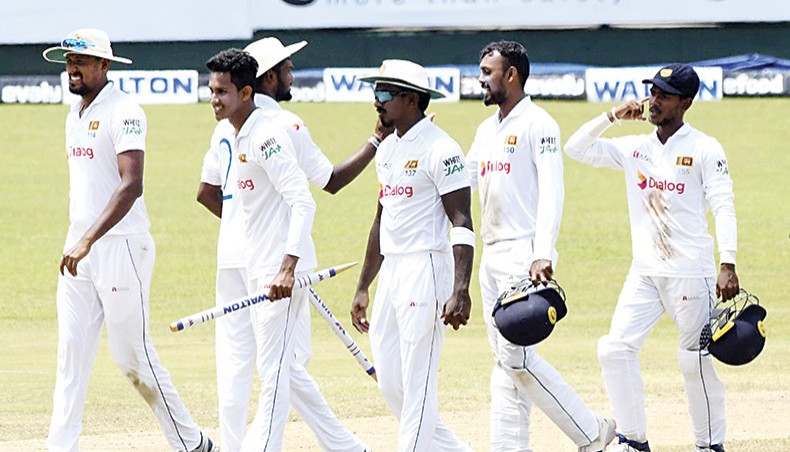 Sri Lanka’s Praveen Jayawickrama (3rd-L) celebrates with team-mates at the end of their second Test against Bangladesh at the Pallekele International Cricket Stadium in Kandy on Monday. — AFP photo

6 — Taijul Islam became the second Bangladesh player after Shakib Al Hasan to take six wickets against Sri Lanka in Sri Lanka in a Test match during the second Test against the hosts, which concluded on Monday. Taijul finished with 6-155 in the match, which included a five-wicket haul in the second innings. Shakib had taken 6-154 in March 2017, in Colombo.

11 — Left-arm spinner Praveen Jayawickrama finished with a match figure of 11-178 against Bangladesh in the second Test to become the first Sri Lankan and 16th player overall to claim a 10-wicket haul on Test debut. He also has the joint fifth best match figures on a debut Test with Indian leg-spinner Narendra Hirwani occupying the top spot in that list with 16-136 against West Indies in 1988 in Chennai.

92 — Bangladesh suffered its 92nd defeat in Tests when they lost the second Test on Monday at the Pallekele International Cricket Stadium. The Tigers have so far played 123 Tests, out of which they won just 14, drawn 17 and have lost the remaining 92 games.