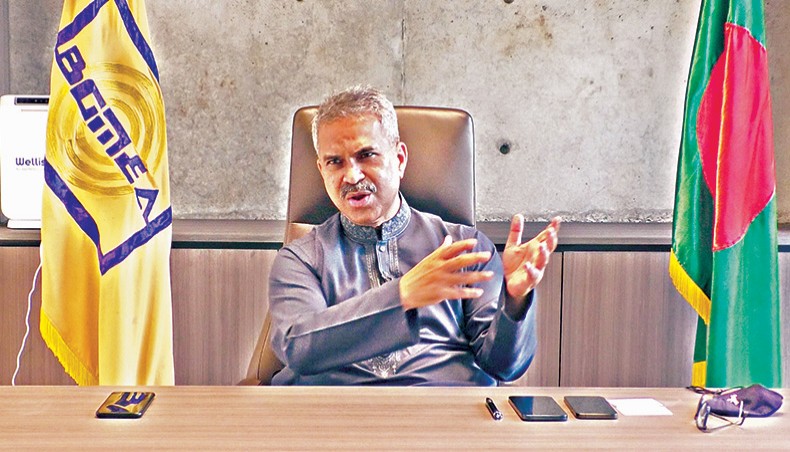 Faruque Hassan, newly elected president of the Bangladesh Garment Manufacturers and Exporters Association, said that it would be very tough for the readymade garment sector to recover from the Covid-19 fallout due to cancellation of orders by buyers amid the resurgence of the pandemic.

In an exclusive interview with New Age, the business leader on April 25 expressed his determination to turn the existing challenges into opportunities through adopting timely policies.

The BGMEA president said that in order to tap into the potentials of the post-pandemic era, the trade body would emphasise the development of man-made fibre-based products in line with global demand.

Encouraging new orders through developing new products and tapping into the potentials of new markets will be the priority of the new BGMEA board, Faruque said.

‘We are passing through a tough time as both consumption and prices of apparel products have declined all over the world due to unprecedented crises across the globe,’ he said.

When the factories started to recover from the impacts of the first wave of the pandemic, export orders started to witness fresh cancellations in recent months as sales declined in global markets and many of the buyers went out of business due to lockdowns, the BGMEA president said.

‘Although the country’s RMG sector is facing a shortage of orders at this moment, I think we have a lot of opportunities to grow in the coming days once the pandemic comes to an end,’ Faruque said.

The newly elected BGMEA president said that he and his team wanted to work on man-made fibre, product development and market diversification on a priority basis to turn existing challenges into opportunities.

‘Our export earnings declined to $28 billion in the financial year 2019-20 from $34 billion in FY 2018-19. Covid-19 was definitely the main reason declining export earnings but other issues, including product and market diversification, also played a part,’ he said.

‘Being the second largest exporter of RMG products, Bangladesh has the opportunity to expand its export in MMF as we still export 75 per cent cotton-based garments and 25 per cent MMF-based garments,’ the BGMEA president said.

He said that the BGMEA was interested in working on MMFbased garments as the country’s exporters had already invested in technology and process modernisation in the last 10 to 12 years.

‘We are ready to produce MMF but we lag behind in competitiveness in this area than China,’ Faruque said.

He said that the RMG exporters would have to gain competitiveness in MMF step by step as it would not be possible to arrange huge investment all at once for the subsector.

Demanding 10 per cent cash incentive on export of MMF-based garments, Faruque said that policy support was a must for increasing competitiveness.

If the government provides 10 per cent cash incentive on MMFbased RMG export, it will bring in new export orders to the country which will create new employment, the BGMEA president said.

‘We are now getting 1 per cent cash incentive from the government but the incentive never  brings in new orders and new products as 1-per cent support cannot increase competitiveness of a sector,’ he said.

The BGMEA president said that they would work intensively on diversification to reduce dependency on a few products and a few markets.

He said that they would work on efficiency and innovation to identify the demand for a specific product in a specific country to avert raising additional capacity of factories in the same products.

If new investments in the factories increase their capacity in the same products, it will create uneven competition and the buyers will take advantage of the overcapacity, Faruque said.

He urged all the stakeholders to unite and not to engage in any unnecessary competition saying that reduction in prices of products and declining export orders were the big challenges for the factories amid the pandemic.

The BGMEA president said that the export earnings from RMG declined in FY20 mainly due to Covid-19 but it was also a fact that the global apparel business had slowed down since 2015.

He said that apparel export achieved very nominal growth in the period of 2015-2018 due to the global slowdown.

Global business in RMG started to rebound in 2019 but the pandemic caused business to a come to a standstill in 2020, the BGMEA president said.

Regarding the future of the apparel industry, Faruque said that it was a unique sector which had created jobs for a huge number of unskilled people and had empowered women in the country.

Along with building a skilled labour force, the sector was producing efficient mid-level management personnel that will bring about positive changes in the sector in future, he said.

Faruque said that the number of foreign nationals had decreased significantly in the sector as some of the local educational institutions had introduced curriculums in line with the industry needs.

‘Earlier, our education was mostly class-based and not practical. Now, many of the universities have included garments and textiles in their curriculums and are producing merchandisers, industrial engineers and textile engineers,’ he said.

The newly elected BGMEA president requested all the stakeholders, including the buyers, development partners, the government, trade union leaders and players of forward and backward linkage industries, to work together to turn existing challenges in the business into opportunities for the future.

Both the suppliers and buyers have been facing trouble amid the pandemic and considering the situation, the buyers should not ask their suppliers for discount or for airfreight for missing the shipment deadline, he said.

He said that the government should allow deferred payment of existing loans as many factories would have to shut down without the facility.

In order to protect employment in the industry, the government should provide support to the factories as the world has never experienced such a pandemic before, Faruque said.

The BGMEA president also demanded a stimulus package like that given in the previous year to pay workers’ wages for the months of April, May and June along with festival allowances.